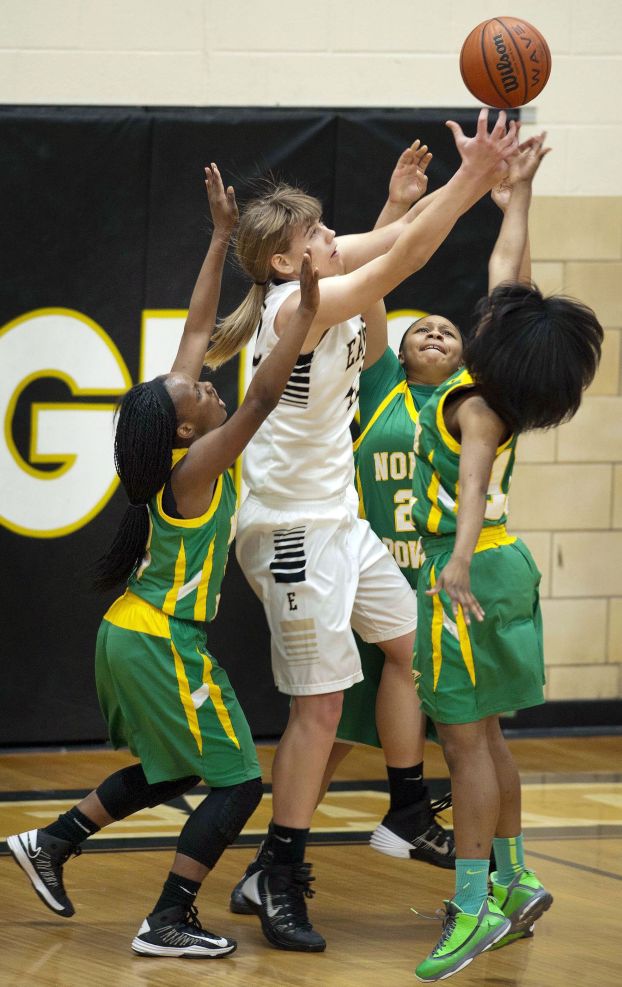 THOMASVILLE — The showdown for the top spot in the Central Carolina’s Conference never really materialized.
The North Rowan girls simply had no answer for the superior inside game of East Davidson Friday night and dropped a demoralizing 65-44 decision to the Golden Eagles.
With the win, East Davidson (18-2, 8-0) clinches the regular season title in the CCC and notched the ninth win in a row.
It was only the fourth loss of the season for the Lady Cavs (14-4, 6-2), but two of those were league losses to the Eagles. Their first meeting at North on Jan. 17 was a one-point thriller but last night offered no such drama.
“It was a layup drill,” North coach Brian Lytton lamented. “We didn’t do what we wanted to do tonight because the girls were not coachable and didn’t set up the way I told them.”
Bayley Plummer, East’s 6-2 sophomore center, controlled the middle with authority as she posted 26 points, 16 rebounds and swatted six shots. North rarely challenged inside against Plummer and Jennifer Welborn, settling instead for a barrage of threes. They hit nine treys but missed at least twice that many.
In the unusual stat of the night, four North players did all the scoring in an identical manner. Nycieko Dixon, Ashley Blaire, Demeria Robinson and Fredejah Royer each scored 11. Dixon and Royer scored a trio of three’s each.
North fell behind 14-3 in the opening quarter then found their shooting range and cut the deficit to 18-17 early in the second period. Treys by Robinson, Dixon and Blaire, plus steals by Special Washington and Robinson, led the surge.
It was still a five-point game then the Golden Eagles got their own long bombs from Miranda Cumpton and Madi Hallman. They closed the half on a 12-3 run to lead 34-20.
North never got closer than 13 the rest of the night as East pounded it inside and hit their free throws late. Fouls were a big factor in the game as East was only whistled for six and North was a mere 3 of 5 at the line. East made 13 of 16.
Eagle coach Don Corry had special praise for his young center Plummer in the win. “She has been getting better and better with her inside game and that was the difference tonight.”
With the regular season title secured, Corry hopes for bigger things the rest of the way from his team. “I think we are as good as anybody,” he stated, “I would be disappointed if we didn’t make a pretty good run.”