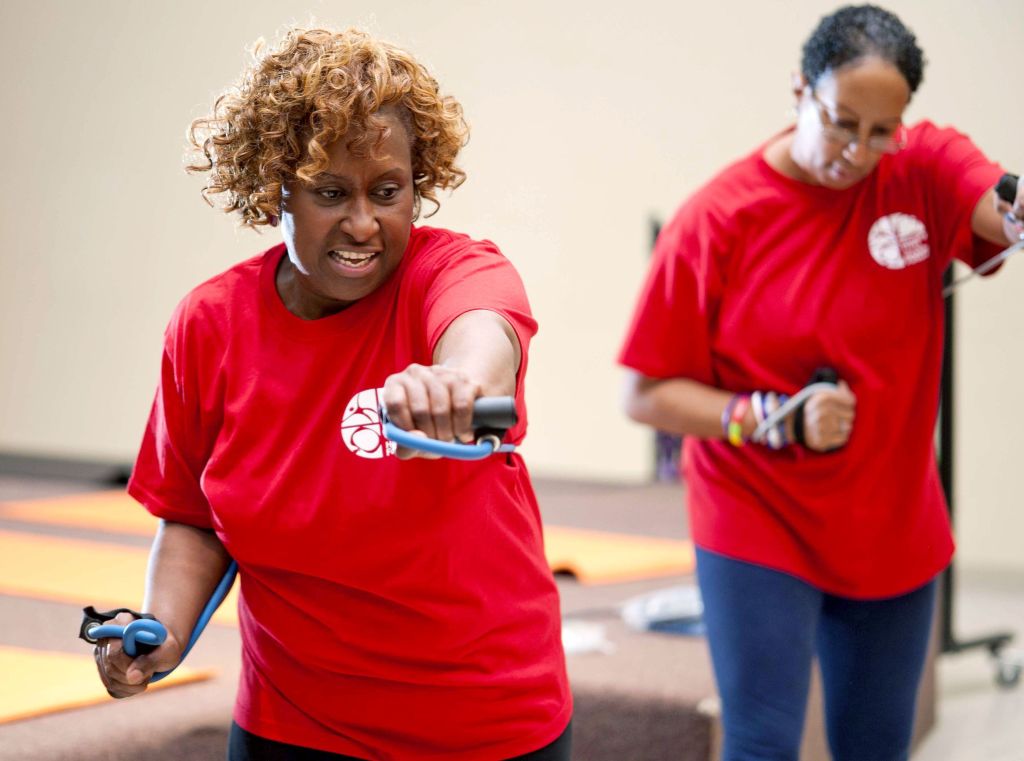 SALISBURY — While Linda Beatty sets up chairs and lays out flex bands, women walk by on a circuit around the sanctuary of Mt. Zion Missionary Baptist Church, warming up. One passes by and holds up four fingers.
“Hey Linda,” she says, “I lost four pounds!”
For the past month, 35 women have been meeting every Monday at Mt. Zion Missionary Baptist Church on Shirley Avenue to talk, exchange recipes and go through a rigorous exercise routine.
The determined group is participating in a “Biggest Loser” challenge funded by the Cabarrus Health Alliance. Fashioned after the hit reality TV show, the challenge has 12 churches in Rowan, Cabarrus and Mecklenburg counties competing to see who can shed the most pounds.
The challenge piggybacks on the Cabarrus Health Alliance’s program “Eat Smart, Move More, Weigh Less,” — a grant-funded outreach designed to reduce chronic health issues in at-risk communities.
Jennifer West, the wellness coordinator for the program, says she can’t take credit for “The Biggest Loser” program. “Eat Smart, Move More, Weigh Less” trains volunteers to teach exercise classes in their local churches, and they’re the ones who came up with it.

g g g
Linda Beatty, the exercise instructor for Mt. Zion’s Health and Wellness outreach, is one such volunteer. Beatty says she hopes to show participants that they can lose a lot of weight without having to pay for a gym membership.
Her goal is to keep Salisbury participants motivated and healthy, even after the competition ends in April.
“It’s a mindset thing” Beatty explained.
She said many people know they need to eat better, exercise more or lose weight, but they put it off. The goal of the program is to demonstrate simple ways to make healthy living a lifestyle.
The first week Mt. Zion participated in the program, Beatty says the group collectively lost 43 pounds.
This past week they lost 24, and Beatty says frustration is starting to show. But she tells the group not to pay much attention to the scales. They could be burning fat and gaining denser muscle instead.
“If you’re not doing the weight,” she tells them, “you’re doing the inches.”
Beatty advised them to pick out an outfit that was slightly too small and try it on every week to see how it fits. It’s been helping.
The program doesn’t emphasize losing pounds, anyway — it emphasizes healthy eating, getting a regular 150 minutes of exercise a week, drinking lots of water and making smarter choices when grocery shopping.
West says they tell the participants to lose no more than two pounds a week — to encourage a healthy lifestyle, not a fad diet.
g g g
The Biggest Loser involves two 15-week behavioral-change classes. The classes are run by West and Greg Stewart, and mostly, they talk about nutrition. West and Stewart encourage participants to eat more vegetables and to read nutrition labels instead of trusting snappy marketing on the front of a box.
Each week they provide a healthy recipe to the group and give them a homework assignment, like going through their pantries and removing everything containing trans fat.
They also encourage each woman to come up with a goal every week. It doesn’t have to be a weight loss goal, West said; it could be something like drinking more water, eating breakfast regularly or walking twice a week.
“You’re only going to get out of this class what you put into it,” West told participants.
While the heart of The Biggest Loser’s Salisbury chapter is at Mt. Zion, many of the participants aren’t members of the church. Tammy Jones, for instance, attends Kingdom Hall. She knew Beatty before the program started, and that, along with a family health scare, brought her into the program.
“Eat Smart, Move More, Weigh Less” is also highly recommended by Jones’ insurance, and she decided she’d give it a try. Her sister and her 18-year-old daughter are also competing in the challenge.
Jones said she used to exercise, but then she stopped.
“I just quit,” she said.
Getting back into the habit is hard. At first, she was a bit reluctant, but it’s helping her daughter, and it’s helping her sister — who had to have a defibrillator put in a few months ago.
“Anything to help my sister — keep her around,” Jones said.
The family approach has worked well for them, she says. They plan meals in advance and collaborate on cooking, and Jones says the household as a whole has given up sugary drinks like soda. In addition, Jones, who works in a medical office, says her experiences help her recommend healthier habits to patients.
“It’s hard to recommend things to do when you’re not doing it yourself,” she said.
Now, she has no problems making those recommendations because she’s tried them and they’ve worked. And she’s seeing the changes. While Jones said she’s not shedding pounds left and right, she feels better and she’s been getting lots of compliments, even if the scale hasn’t noticed.
Others, like Rochelle Crawford, started as another way to stay fit and discovered a community. Since starting The Biggest Loser challenge, Crawford has decided to join Mt. Zion. And for Crawford, it’s a pleasure. She loves getting together with the other participants and talking with them, working out, and the open discussions they have every week.
“I enjoy it from the moment I get here to when I get in the car to go home,” she said, walking a fast circuit around the church.
Crawford has learned to work out at home, either doing videos like “HipHop Abs” or walking when it’s warm. She says she’s lost a bit of weight, but she’s learned not to worry about it.
“I’ve just learned not to get on my scale at home,” she said.
She knows she’s eating right, she’s being active, getting in cardio, and improving her health.
“To me, that’s all that matters,” she said.
The last weigh-in is on April 19. “Eat Smart, Move More, Weigh Less” is providing the church that loses the most weight with a monetary prize to that church’s health and wellness ministry.
While it’s too late to join The Biggest Loser, Mt. Zion hosts exercise classes every Monday from 6-7 p.m. West said Crown and Glory Lutheran Church of Salisbury, also affiliated with “Eat Smart, Move More, Weigh Less,” offers exercise classes once a week for seniors. For more information, please visit hlhf.org.