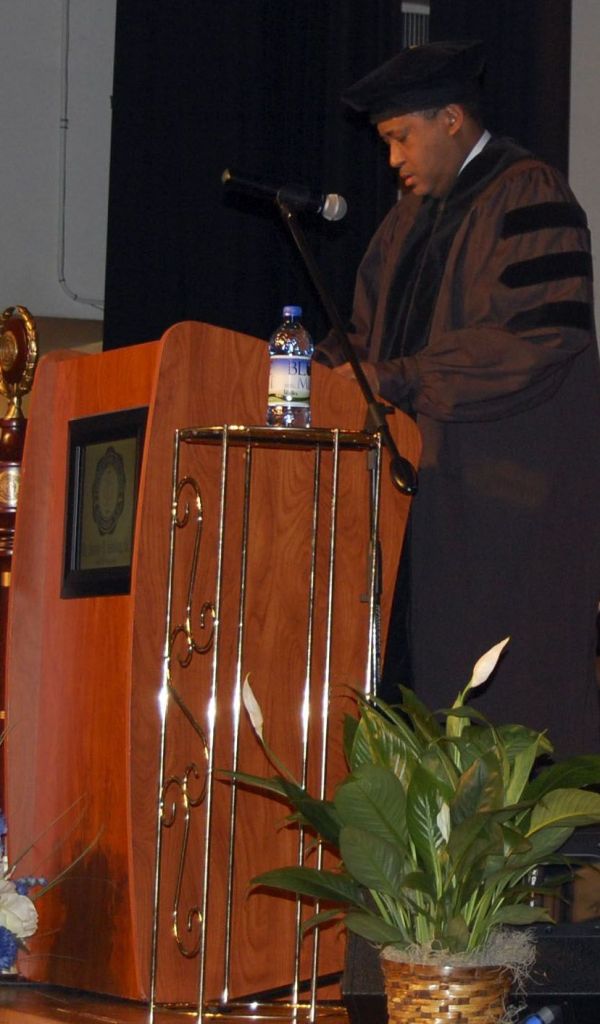 Dr. Joe Leonard Jr., assistant secretary for civil rights at the U.S. Department of Agriculture, focused on the need for higher education and strength from God to achieve equality in his address to students, faculty and guests at Livingstone College’s 134th annual Founder’s Day.
Livingstone College was founded in the midst of a post-Civil War South, and Dr. Joseph Charles Price, the college’s founder, believed that education was vital to achieve equality, Leonard explained.
“In 1879, an army was needed to be formed, not with bayonets and swords, but with pen and paper,” Leonard said.
He added, “Those recruiting stations” were historically black colleges and universities.
Since then, the nation has changed. Schools have been integrated, and voters have even voted a black president into office.
“History’s going to capture this renewal of American values,” Leonard said.
Leonard understands how far the nation has come and how far it has left to go.
He grew up in Austin, Texas. He began kindergarten during the firestorm of integration, and his father was one of the first black administrators in the city’s integrated school system.
He recalls receiving death threats from people who didn’t want to see him go to school.
But he decided if people didn’t want him to go to kindergarten, he was going to get the most education possible.
Leonard spoke about how he has tightly clung to the last public and private words of Dr. Martin Luther King Jr. for inspiration in his life and his journey of working for civil rights.
King’s last public words were, “Mine eyes have seen the glory of the coming of the Lord and his truth is marching on.”
“You need to feel that that truth is marching on in you. It will gird you to do things beyond what you know is capable. You need to understand that the Price legacy is that truth marching on in you. You cannot do this by yourself,” he said.
Referring to King’s last private words, Leonard added, “You’re going to need the precious Lord to take your hand, but you’re going to have to walk on your own as well.”
He told his audience to cling to the support system of God, family and college.
Even when his family discouraged him and his wife from pursuing their doctoral degrees, Leonard never lost sight of his goal.
“The older you get, you aren’t going to regret the things that you did. You’re going to regret the things you didn’t even try to do,” he said.
His determination afforded him many opportunities over the years, including several influential positions in Washington, D.C.
Leonard is the longest serving assistant secretary for civil rights at the U.S. Department of Agriculture.
His office has helped settle discrimination complaints from African Americans, Hispanics, women and Native American.
Formerly, he was the executive director of the Congressional Black Caucus and the executive director of the Black Leadership Forum, an umbrella organization of 32 member groups that together work to develop and implement progressive public policies for social change.
Livingstone College President Dr. Jimmy R. Jenkins, Sr. awarded Leonard with an honorary doctorate of humane letters.
Jenkins echoed Leonard’s sentiments toward the importance of higher education when he talked about the importance of Founder’s Day.
“It is a day distinguished like no other in this institution’s history, for it is the day we refocus ourselves on the legacy and the challenge that Dr. Price and our father God left in our stewardship. It is the day we refortify our grip on the Prician pledge, that no matter how dark the night, we believe in the coming of the morning and the promise that comes with the rising of the sun,” he said.