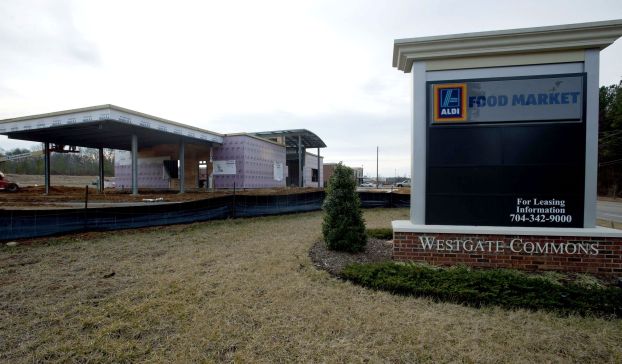 Construction of the new Premier Federal Credit Union of Greensboro is nearing completion on Jake Alexander Boulevard behind Aldi.

The credit union paid Charlotte developer Childress Klein $670,000 in May for a parcel near Aldi at the intersection of Jake Alexander Boulevard and Brenner Avenue. The developer, which owns the remainder of the 15-acre property called Westgate Commons, has three more parcels under contract.

Alexander Trace, the proposed apartment complex beside Aldi on Brenner Avenue, is still in the works. Pirhl Southeast is completing due diligence and has the property under contract.

Childress Klein purchased the 15-acre, triangle-shaped tract bound by Jake Alexander Boulevard, Brenner Avenue and Milford Hills Road in 2008 from Livingstone College. But development of the site stalled with the recession.

Aldi bought about two acres from Childress Klein in 2011 and built the 18,761-square-foot supermarket across from Harris Teeter.