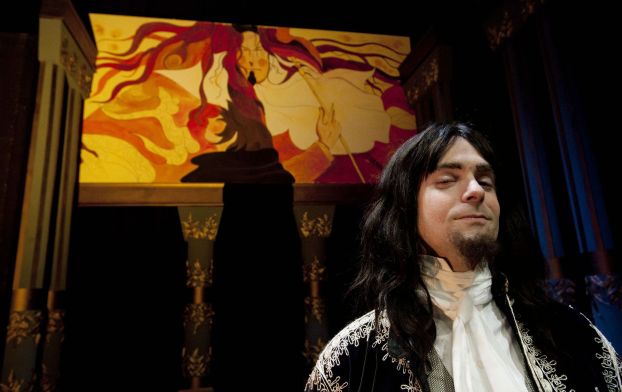 Piedmont Players production of “The Count of Monte Cristo” opens this week, with Tim Campbell playing lead character Edmund Dantes — aka the count.
This is Tim’s first time being on stage since doing a Piedmont Players Youth Shakespeare show back in February 2004.
It’s ironic that after escaping from prison, Edmund Dantes disappears for 10 years before resurfacing as the Count of Monte Cristo, and Tim has disappeared from the stage for 10 years before resurfacing as the Count of Monte Cristo.
Coincidence? Let’s hope so.
Why return to the stage after so many years? “I moved back to the area and remembered this was a lot of fun,” Tim said. “so I figured I’d give it a shot if they’d have me.”
He said people who see the play will like the show for several reasons.
“The standard everyday person will enjoy the fact that we have a pretty good bit of fancy sword play,” he said. “The set looks amazing. The costumes are amazing. There is so much thought and comedy and action and drama going on that I think most everyone will find something they will enjoy about this show.”
The production has a large, diverse cast, including familiar Meroney Theatre faces like Edward Whitney and Austin Young, who just starred together in “The 39 Steps” in December. Also on stage will be familiar Norvell faces like William Clark, Amery Barton and Susannah Dixon, who performed in “The Little Mermaid” last summer.
Others are returning to the Meroney stage for the first time in several years, like Alison Bird (“The Matchmaker”) and Russell Bennett (“Three Musketeers”). And some brand new faces will make their Meroney debut, like Amber Watson and David Cline.
When asked about working with such a wide range of talent, Campbell simply says, “The cast is tremendous in embodying the roles they have taken on.”