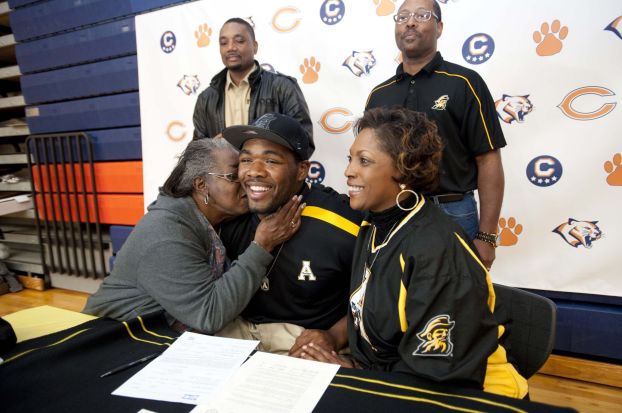 CHINA GROVE — Carson senior MyQuon Stout has endured more in his high school years than most do during a lifetime.
But on Wednesday afternoon, none of that mattered — he was on top of the world.
Donning black and gold regalia and surrounded by family, friends, coaches and teammates, Stout officially inked his letter of intent to play football at Appalachian State in the fall on National Signing Day.
“It’s a big opportunity and I am blessed,” he explained in-between smiles. “I want to thank God number one. It’s just good to see all the hard work paid off.
“It’s been rough, not going to lie. But I just had to keep working and keep grinding.”
After burying his mother before the start of his senior season last fall, Stout said he dedicated his football career to her, which led him to signing to play college ball.
“Last year, my mom passed away the week before the first practice. She was my everything,” he said. “That’s pretty much what I’m doing all this for — showing her that all her hard work paid off on me.”
Carson head coach Joe Pinyan was all smiles during the ceremony, bragging about his star. He said that Stout was not only one of the best players he’s coached, but one of the best people off the field as well.
“You can’t say enough about great kids,” he explained. “You don’t get to see them very often. MyQuon fits right in there in the crowd of the best players I’ve coached. He’s a very special athlete and a great person. It’s not often you get that.
“MyQuon was always that guy that when he went into the huddle, everybody else looked around and said ‘it’s time to get going.’ He’s that guy that walks down the hallway and the teachers say ‘I wish I had him in my class,’” Pinyan continued. “There are so many perfect things about him: he’s a gentleman and a great student, but the biggest thing he’s done is give this football program a winning attitude.”
That winning attitude included switching positions for his senior year just to fill a need.
Despite being recruited by Division I programs as a defensive lineman and earning a Shrine Bowl invite for his play in the trenches, Stout stood up and played linebacker because that’s what the team needed him to do.
“He’s a very unselfish young man,” Pinyan said. “He could have play defensive line for us this year and been a superstar, but we needed him to play somewhere else to make us a better football team. He chose to do what we wanted to do.
“That is the thing that’s special about him. I think Appalachian saw that he’s going to be a defensive lineman even though we played him as a linebacker this year, they know what he’s going to be. The Shrine Bowl took him as a defensive lineman too. He’s just a special guy that’s willing to do whatever it takes for the team to be successful.”
As for Stout, he’s just excited about getting his hand back on the ground and doing what he loves most — rushing the quarterback.
“I didn’t really want to play linebacker any at all this year,” he said with a laugh. “But it made my team better with me playing linebacker. We had two good defensive ends, so me going to linebacker was probably the best thing.
“I love my hand on the ground. Appalachian runs a 3-4 defense and just lets the defensive ends go get the ball and I like that.”
Stout will get the opportunity after a chance-encounter with App’s linebacker coach Mark Ivey last year at Carson set the groundwork for his upcoming collegiate career.
Ivey was in town to meet with former Cougar coach Mark Woody and happened to run into the burly Stout in the hallway. Woody called him out of class to formally meet Ivey again.
“[Signing with Appalachian] was kind of meant to be,” he remembered. “They showed me the most interest out of everybody. At first, my favorite was ECU, but I ended up choosing App.
“I love the coaches, the hometown environment and how confident they are up there,” he continued. “All they talk about is winning, winning, winning — and that’s what I want to be apart of.”
He also held offers from Charlotte, Wofford, Furman, North Carolina A&T and Campbell.
Stout joins a program in transition as Appalachian will join the Sun Belt Conference this season at the FBS level. The Mountaineers kick off the 2014 season against national powerhouse Michigan in August.
“The FBS is big time; I’m liking that,” he said. “We have 27 people committed in our graduation class in 2014 and moving up to the Sun Belt is going to be pretty good. Four of the teams played in bowl games this year.
“I’m going to be working hard and try to get into the rotation on the line,” Stout continued. “They really haven’t told me if I will redshirt next year, but they said they’ll let me come in and fight for a spot.
“I met all the other players and they’re cool, The whole time they were confident and talking about winning: ‘once you get here, it’s all about winning.’”
With his football future secure and signing day behind him, Stout can breathe easy once again and focus on the rest of his senior season, even though he’s far from ready to finish.
“I’m glad it’s over with now,” he said. “Now I can finish my senior year even though I’m not ready to graduate.”
But even when he leaves Carson in June, his legacy will stay imprinted on the school and the football program for years to come.
“MyQuon has left enough of a legacy that everyone now wants to be apart of this program because he made this program better,” Pinyan added.