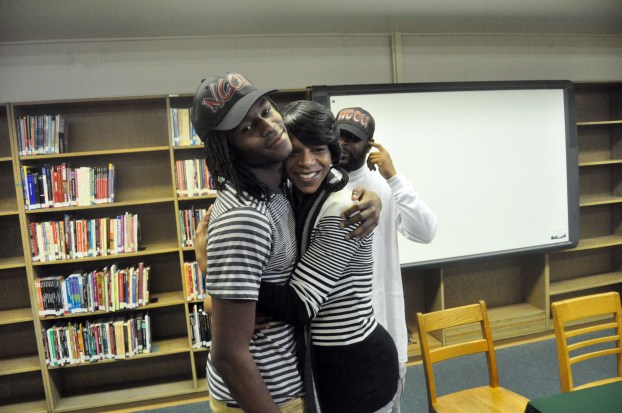 Robinson blocks his way to NCCU

SPENCER — Everyone feared North Rowan this year in the 2-A classification and punters were no exception.
That’s because Mike Robinson was there, lurking at the line of scrimmage, but not for long.
Robinson mastered the art of the blocked kick last year, bursting through the backfield quick enough and calculating the timing just right to make him one of the leaders of the North defense.
Robinson just has a knack for interrupting kicks. It’s kind of his niche and the N.C. Central commit takes pride in the art of the block.
“A lot of people ask me how I do it,” Robinson said. “I get my timing down by watching the center. As soon as [the center] moves his wrist, I go,” Robinson said. “I usually beat everybody off the line.”
The senior cornerback carried a versatile skill set, blocking four punts and two extra points and intercepting three passes, returning one for a touchdown. Without him, North doesn’t break a school record for wins last year and because of that, he signed with NCCU Wednesday.
Robinson is one of four defensive backs the Eagles have already inked. More Cavaliers will sign to play collegiately the coming weeks, but Robinson is first to the pen much like he was first to the defensive backfield. He’s also the first to sign under coach Joe Nixon, last season’s Rowan County Coach of the Year.
“Coaches are very excited about his height and athletic ability,” North coach Joe Nixon said. “Mike being such a great kid and a great student set himself up to have several options.”
Robinson was an all-county selection and anchored the secondary along with Kenyaun Coney.
Robinson was part of a defense that held opponents scoreless for 15 quarters from late into the season into the playoffs. North pitched three consecutive shutouts, illustrating its defensive tenacity.
“Mike’s a versatile player,” Nixon said. “He might be able to make an impact on special teams pretty soon.”
Robinson, 6-feet, 170 pounds, could put on some muscle, or gain at least 15 pounds as he puts it, when he joins the Eagles. NCCU went 5-7 last season. This year’s schedule includes a date with Charlotte at home and a trip to East Carolina. NCCU also goes to South Carolina State, where North alum Javon Hargrave plays on the defensive line.
Lenoir-Rhyne offered Robinson, but NCCU felt like a better fit. UNC Pembroke was a likely option at one point, but head coach Pete Shinnick left for West Florida last week.
“I tell all my guys ‘let’s not think about football and let’s make sure we’re happy and we know we’re going to be happy there for educational purposes,” Nixon said. “That’s my ultimate goal as a coach. I want my guys to go and get an education.”
When Nixon came to North in 2012, Robinson was a free safety. The coaching staff moved him over to corner permanently. He’s been a fixture there since Nixon’s been coach. Obviously, it’s worked out.
“Coach saw me as something else so I moved to corner and it worked out,” Robinson said. “I really appreciate him for that.”
Robinson finished the year with 62 tackles, 11 for loss.
The Cavaliers’ offense made them a treat to watch, but it was the defense that carried them to a 13-1 season. Robinson remembers when things weren’t all that rosy at North, like his sophomore year when the Cavs went 4-8.
“To turn it around like we did was awesome to be a part of,” Robinson said. “We didn’t win state this year like we wanted to, but it was still a great season.”
Robinson signed on the dotted line at about 1:50 p.m., not long before school let out. There was rousing applause from classmates and teammates, both of whom Robinson has cherished.
“I’ve loved my time at North,” he said. “It was a great four years.”