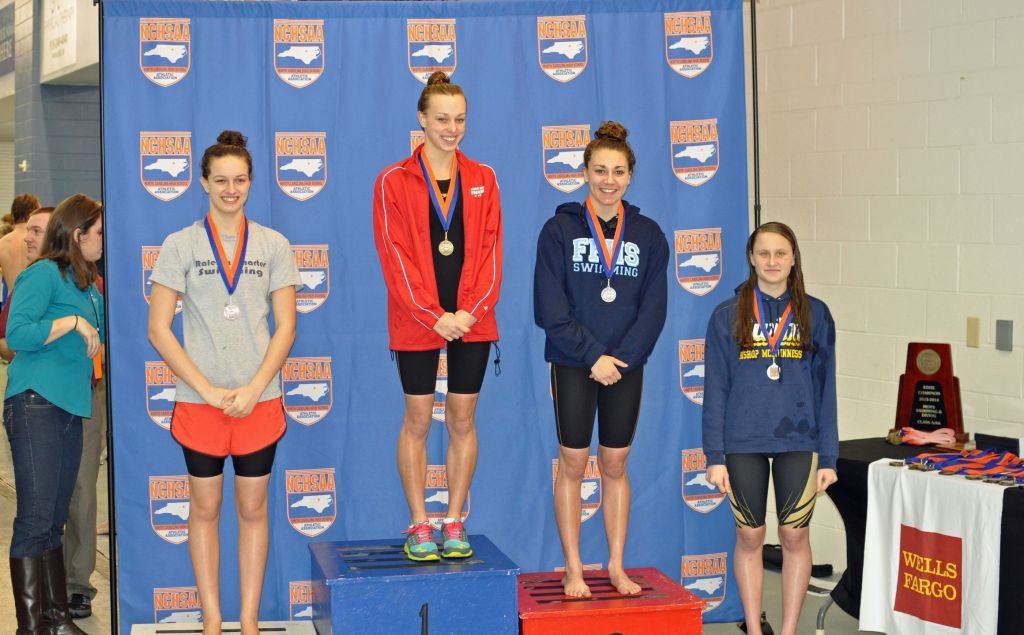 CARY — Salisbury senior McKenzie Stevens capped a brilliant high school career by winning the 500 meters in the 1A-2A State Championships held at Cary’s Triangle Aquatic Center on Thursday.
Stevens, county swimmer of the year the past two seasons, covered the distance in 5:04.96 and won by more than eight seconds.
The Queens signee had placed second in the 500 as a junior.
Stevens won the recent 1A-2A West Regional in 5:17.74, so she was pretty strong
“I didn’t feel like I was quite my best but I still swam close to my best time in that event,” she said. “One girl had the same seed time, but I felt pretty confident going in. I’d beaten her last year. Once you’ve been at states, it gets a little easier to relax and swim well.”
Stevens was the defending champ in the 200 freestyle. That’s actually where she produced her finest race on Thursday, but it was only good for second place. That’s because Christina Lappin, a sophomore at Lincoln Charter, set a new state standard for 1A-2A with a blazing time of 1:49.31.
Stevens was clocked in 1:53.09, considerably faster than her 1:59.76 that won the 1A-2A West Regional.
“I can’t feel bad about it,” Stevens said. “I swam the best time of my life, a half-second faster than I’d ever done before. I set my school record, but she set a state record.”
Stevens also anchored the Salisbury 400 free relay team that finished 13th and turned in a 4:10.39 clocking. Stevens competed with Nellie Brown, Sharmi Amin and Amelia Steinman.
“It was great getting to compete with those girls and we dropped five seconds off our best time,” Stevens said.
It was a long day for Stevens that started with a wakeup call and morning prelims, but it was worth it. Her last day as a high school swimmer is one she can always look back on with pride. She went out as a record-breaker and a champion and that made all those hours of practice worthwhile.
“I’m really tired right now,” Stevens said. “But, yep, this was a pretty good day.”
•