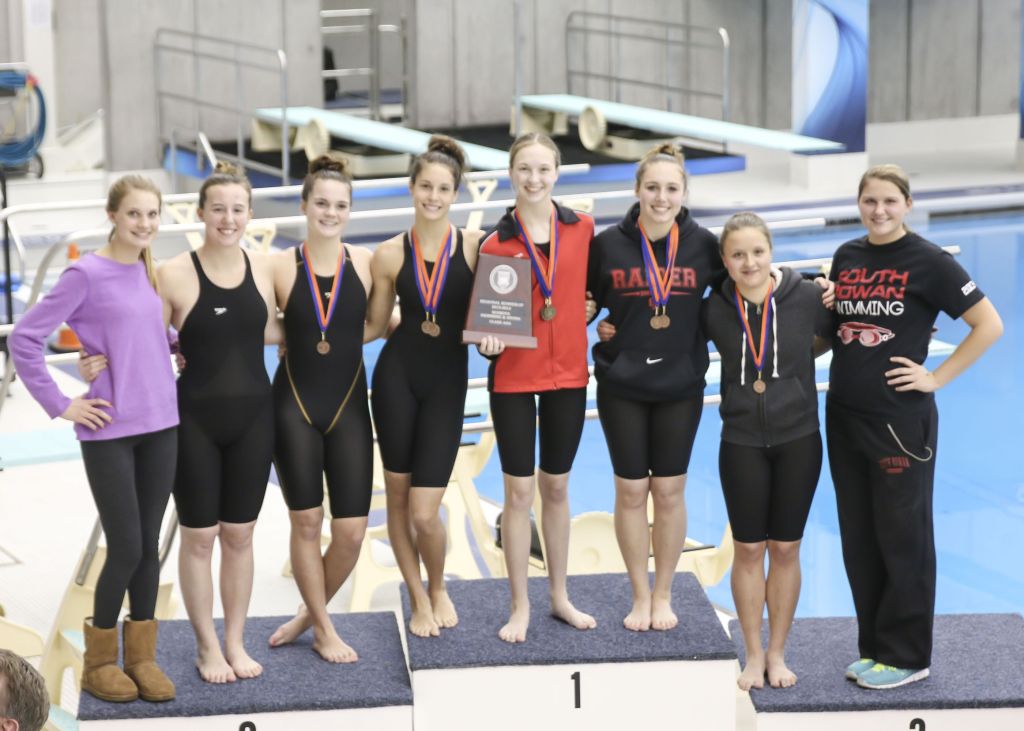 LANDIS — South Rowan’s Leslie Franks will be one of the underdogs Saturday in the 3A state swim meet at Cary’s Triad Aquatic Center, but whatever happens she’s come a long way in a short time.
The South Rowan junior won the 50-meter freestyle in last weekend’s Central Regional Meet in Greensboro and also qualified for state competition in the 100 breaststroke, an event in which she was the Rowan County and South Piedmont Conference champion.
Franks also will be part of South’s 200 medley and 200 freestyle relay teams Saturday.
“Competing as an individual and competing as part of a relay are completely different things, but I enjoy both,” Franks said. “In a way I like having it all on my shoulders, but it’s also good having teammates involved with you. There’s pressure waiting to anchor that 200 relay, for instance, but it’s a great feeling knowing everyone is there for each other.”
The second-place regional finish by South’s girls (Cox Mill won it) was the biggest thing that’s happened to the school in a team sport in a while. It was a testament to program depth that coach Greg Yanz built and Jacob Morton has continued. A pat on the back also goes out to the school’s diving pioneers — senior Katie Carlton and sophomores Madyson Campbell and Brittany Luckey. They racked up 53 regional points with a 1-2-3 finish in the 1-meter dive. They were the difference between silver and bronze for the Raiders.
“Having the divers helps,” Franks said. “And we’ve got quite a few good swimmers. We qualified all three of our relays for state.”
What separates Franks from most girls capable of competing at the state level is she got a late start. Her sport growing up was soccer and she played club soccer for years. Swimming entered her life by accident.
“My teammate Casey Pruitt is responsible,” Franks said with a laugh. “She kind of dragged me into swimming when I was a freshman. Casey told me I had to come with her. I went to practice just to hang out.”
Franks’ first competitive meet came during that freshman year. To her surprise, she discovered she was blessed with a serious swim gene. She was a natural.
“Leslie has more natural talent in her pinky finger than many athletes have in their bodies,” Morton said. “She can hang in there now with kids who have been doing this for 10 years because she’s combined her talent with hard work. It’s rare to find someone to whom it comes so easily, yet is still so committed to getting better. Most kids in her position would just sit back and let it come, but she goes after it.”
While being good came swiftly. Franks has made an effort to become great.
“Swimming is a sport that requires a lot of commitment, for sure,” Franks said. “It’s a sport where you spend weeks trying to shave a second or half-second off your times. During the school year, we’ll spend 90 minutes a day in the pool practicing and an hour of dry-land practice. And in the summers, it’s more time than that. I was fortunate to have a great coach (Yanz) that helped me get started, and I’ve had another great coach (Morton) the last two years. And I’ve got great teammates. I’ve had good role models, and I’ve made progress.”
Franks makes all A’s, stays involved with her church In Landis and dreams about majoring in marine biology and working with dolphins.
She still plays soccer for her school in the spring, but she’s devoted her athletic life to swimming.
She’ll compete in the 200 medley relay Saturday along with Faith Casswell, Pruitt and Taylor Kluttz. In the 200 relay, Franks will follow Nicole Mauldin (co-MVP with Franks in the Rowan County Meet), Sabrina Broadway and Kluttz into the pool.
In the 50 freestyle and 100 breaststroke, Franks will have her fate on her own shoulders.
There are 24 competitors in each state swimming event. Top-eight finishers in the morning prelims qualify for the afternoon finals.
Franks won the 50 free in the regional in 25.76 seconds, but the fastest person in the event is expected to be Michaela Carter of Corinth-Holders. She won the East Regional in 24.82.
Franks swam 1:11.98 to shatter South’s school record in the 100 breaststroke in the SPC Championships, but Cedar Ridge’s Becca Churchill comes to the state meet after a 1:07.73 clocking in the East Regional.
Franks looks forward to the challenge of competing against the best in 3A.
“I’ve been to states before, and it’s a different environment,” Franks said. “It’s going to be a really nice pool and people will go faster than they’ve ever gone. Everyone is going to be fast, and you just do your best to keep up. What I have to remember is that most of the people who will be there Saturday have been swimming their whole life.”
Morton expects all his swimmers to compete well today and he expects today’s meet to be a stepping stone for Franks to even bigger things in 2014.
“Leslie has been great this year, encouraging her younger teammates and leading by example,” he said. “The intensity of a workout is clearly higher as soon as she gets in the pool. I’m extraordinarily proud of what she’s accomplished and I can’t wait to see what she does at states — and what she does at states next year. This year was just a preview.”
Franks won’t be satisfied no matter what the scoreboard says Saturday.
“I’m going to be in the pool a lot in the next year,” she said. “I’m going to keep training. I’m going to get better.”