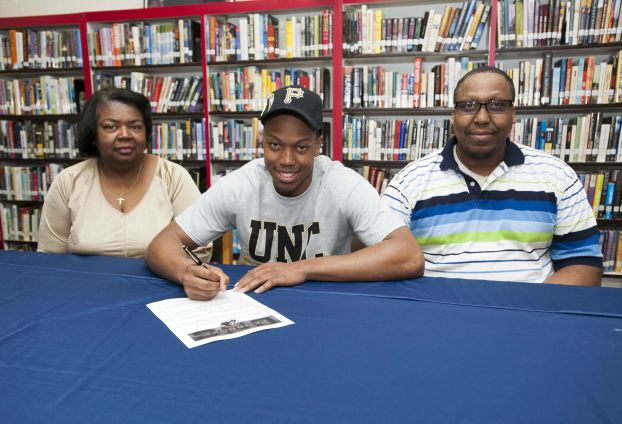 GRANITE QUARRY — Dock Corpening got a crash course in the reality of college football before he had even committed.
Last week, UNC Pembroke football coach Pete Shinnick abruptly left the Braves for West Florida. Shinnick led UNCP to a 9-2 mark last year, including wins in their first six games. The resignation came after leading the Braves to a 50-24 record in seven seasons and shocked the Division II ranks coming just days away from signing day.
But like football, you can’t stay down after getting hit.
Corpening dished out plenty of hits at East Rowan and wants to distribute more at UNCP. Corpening was an impact defensive end in 2012 and reached the all-county team as a linebacker last year. He stuck with his choice and joined the program that had its best season since its infancy in 2005.
“I understood it was the business of the game,” Corpening said after making his choice official last Wednesday. “You can’t stay mad at anything too long. It’ll ruin your life.”
There’s still plenty of reason for optimism at UNCP, where nine starters return from a team that reached the second round of the D-II playoffs. A winning culture has sprouted, one that Corpening wants to be a part of. The scholarship Corpening signed Wednesday was the first step in that.
“They still have that talent and that winning mentality,” East assistant Jason Barnes said. “There’s no question the mentality and the talent will carry over.”
Corpening, 6-foot-1 195 pounds, attracted several schools, including Lenoir-Rhyne where teammate and good friend Calvin Edwards is headed. After Edwards committed to L-R, Corpening had to stew over a tough decision.
“Sitting there, I was like, ‘I could play with my boy again,’” Corpening said. “It was a hard decision. But sometimes you have to split up to get where you want to go in life.”
Two years ago, Corpening was part of a revitalized Mustang team that went from 1-10 the previous year to 8-5 and reaching the third round of the state playoffs. Most teams altered their game plan to run away from Corpening’s size and speed. His third year starting, Corpening amassed 82 tackles, 64 of which were solo. There were 13 quarterback hurries, five sacks and some spot duty in the secondary. In the 2012 second-round playoff win against Rockingham County, Corpening made 6 tackles (eight solo, four assisted) and had two sacks and two tackles for loss. Corpening was part of a stacked defense that year that was led up front by the likes of T.J. Jefferson and Tyler L’Hommedieu, both college signees.
East had high hopes this season but stumbled without its top offensive weapon in Edwards and lost in the first round of postseason at 4-8.
Corpening made his official visit last month to the small school in the southeastern part of the state. Corpening liked the warm, inviting environment and that his position coach made him feel at ease.
“I loved the atmosphere,” Corpening said. “It seemed like a great place to be. I felt like all the guys there were my brothers. ”
The Braves, an independent without a host conference, host Catawba Oct. 18. South Iredell’s Garrett Barnett and Purnell Swett’s Chuck Oxendine are other linebackers UNCP signed.
“Dock’s an extraordinary athlete,” Barnes said. “Very physical, very fast and very strong. There’s no question that he can go to that next level and do a great job.”
Corpening knows there’s improvement to be made if he wants to be as significant in college as he was at East.
“I’ve got to get my footwork better,” Corpening said. “Everybody knows I can get in the backfield and cause havoc. I’ve got to get better and getting back and covering, opening my hips and that. If I can’t drop back and cover a tight end or a receiver, it doesn’t matter.”