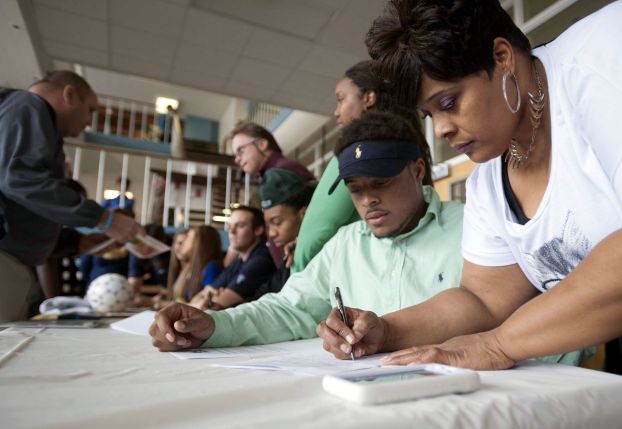 MOUNT ULLA — There was a church league basketball game the other day that included a dunk.
Zeke Blackwood, who is maybe 5-foot-11, soared for a rebound and casually slammed the ball through the hoop before he returned to the floor.
While church-league jams don’t necessarily qualify a person to play college football, that one did provide a hint as to what sort of athlete Blackwood is. The West Rowan strong safety, as strong as he is springy, chose St. Augustine’s on National Signing Day.
Blackwood has outgrown safety now — he’s added about 20 pounds since the prep season — and will be an outside linebacker for St. Augustine’s, a D-II school in Raleigh that competes in the CIAA.
Physically, Blackwood is powerful enough to handle that position switch.
“We didn’t play many games where Zeke didn’t do something that was just freakish athletically,” West coach Scott Young said. “That’s a 215-pound guy that can do backflips all day. He can bench-press the world. He can hang-clean the world.”
Blackwood also can squat a good portion of the world — 475 pounds at last report. He’s run 40s as fast as 4.53 seconds, while vertical-jumping 38 inches and benching 315. Blackwood’s track events are diverse — shot put and high jump — and that provides another clue about his athleticism.
Blackwood has no personality or attitude issues. It’s hard to find him without a smile on his face, and there weren’t any games in his three years as a starter for West when he wasn’t ready to play.
“An absolutely great kid,” Young said.
The only thing Blackwood doesn’t have is height. That’s why he’ll be competing in D-II, but he’s fine with that.
“I felt very comfortable with the atmosphere at St. Augustine’s,” Blackwood said. “I’ve got a cousin from Mooresville who’s played football there (offensive lineman Au’Darius Blackwood) and I’ve gone up to see him and been on that campus a lot. Everyone there always treated me like family.”
Blackwood said he made his final decision the weekend before signing day.
“I’ve been leaning that way for a couple of months,” Blackwood said. “I thought the St. Aug’s coaching staff was very cool when I met them.”
Some things won’t change for Blackwood. Like West Rowan, St. Augustine’s has a color scheme of blue and white. And the SA nickame is the Mighty Falcons.
Michael Costa is the only head coach St. Augustine’s has had since it made the decision to revive the football program in 2002.
Last year was fairly lean — 4-6, including hard-fought wins against Livingstone and Johnson C. Smith. But just three years ago, St. Augustine’s was nationally ranked and beat Catawba and Winston-Salem State, so the Mighty Falcons are capable of good things.
Costa is getting a player who can do good things. Blackwood has an all-world highlight video.
In that video, Blackwood fights off blockers to blow up option plays, crushes people on special teams and defends passes 30 yards downfield.
On one play, North Rowan’s great back Jareke Chambers beats Blackwood for a pass reception but Blackwood doesn’t give up, pursues and makes the tackle. On another play, Chambers gets open downfield, but he has to leap for a pass and Blackwood blasts him, knocking the ball loose.
Covering a kick, Blackwood plants a Mooresville return man so hard he leaves a divot. On another, Davie’s sensational running back Cade Carney crashes into a blue brick wall wearing No. 9 and goes down in a heap. And there’s a kickoff on which Blackwood pancakes the guy trying to block him and adds syrup by making the tackle.
“Zeke did some things that just wowed you,” Young said.
Ask Blackwood about his most memorable moment and it was one from his sophomore year. It was a close game with Salisbury, and Blackwood’s 66-yard sprint for a pick-6 on Brian Bauk’s attempted screen pass to Dominique Dismuke decided that game for the Falcons.
“Looking back, that was the best play I ever made,” Blackwood said.
There should be more like it in his future.