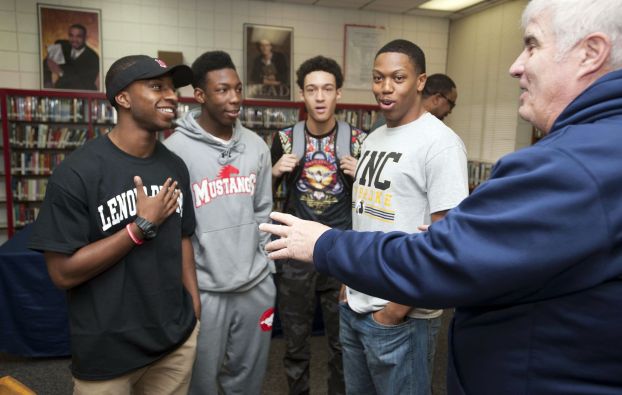 GRANITE QUARRY — As far as tangible goals, it’s been hard for Calvin Edwards to take positives from his senior year.
After a back injury suffered last spring, Edwards never put on pads last season. This coming after Edwards was the county’s leading rusher in 2012 during East Rowan’s dream season that resulted in a 8-5 record and an appearance in the third round of the state playoffs. It was an abrupt fall for a guy who graced the cover of the Post’s football preview.
Wednesday, it wasn’t a helmet, but a visor that trumpeted the running back’s return to football. And a pretty awesome cake.
Edwards signed a letter of intent to play football at Lenoir-Rhyne, a school that reached the Division II championship game just two months ago.
It’s vindication for a guy who hasn’t touched the field since East was knocked out of the playoffs by Concord in November, 2012.
“I was kind of shocked actually,” Edwards said of getting offered. “Not playing my senior year, I didn’t see it coming.”
But Jan. 1 marked a new year. Edwards was cleared to work out and train at full speed. A combine loomed at Lenoir-Rhyne where the opportunity that eluded him throughout the prep season presented itself.
“In that three weeks, he trained very hard,” East Rowan assistant Jason Barnes said. “He went from not being able to move very quick or lift much weight and he went to L-R and just showed out.”
Edwards did well enough to garner an offer and remembered what it felt like to feel good about football.
Two years ago, he ran for 1,501 yards and 21 touchdowns as East’s offensive stalwart. The year before, he was a bright spot on a 1-win team that struggled to generate offense. That player doesn’t just disappear overnight.
“In that one day he showed the coaches what they really needed to see,” Barnes said. “He went there and stood out among the rest.”
L-R reached the Division II title game for the first time in school history. The 5-foot-9, 175-pound Edwards was enticed watching the Bears, even comparing them to East with both running a run-orientented offense.
“I didn’t want to go to a school where they pass the ball a lot,” Edwards said. “Lenoir-Rhyne runs the ball quite a bit. It kind of reminded me of East Rowan out there.”
Reaching the title game exposed L-R to many who didn’t know about the private school in Hickory. New L-R coach Ian Shields utilizes a triple-option much like Georgia Tech or Army, where he was an assistant.
“They’ve got a very good chance to be contenders again this year,” Barnes said. “They’re going to come in and reload.”
First, Edwards was expected to miss the opener, then the second game came and he didn’t play. Before you knew it, half the season was over and Edwards was still sidelined. It was announced in October he wouldn’t play, but he still had an impact on the other running backs such as freshman Max Wall.
“Even though I couldn’t help on the field I tried my best to be a verbal leader and help in practice,” said Edwards after a downing a slice of cake drawn out of a bear and the Lenior-Rhyne logo.
Teammate and friend Dock Corpening committed to UNC Pembroke and jokingly tossed verbal jabs about a potential matchup between their respective schools. Edwards said Corpening and he considered playing at the same school before making final decisions.
Edwards noted he needs to gain muscle and quickness to be effective at the next level.
“I feel fortunate that I’m able to play in college,” he said.