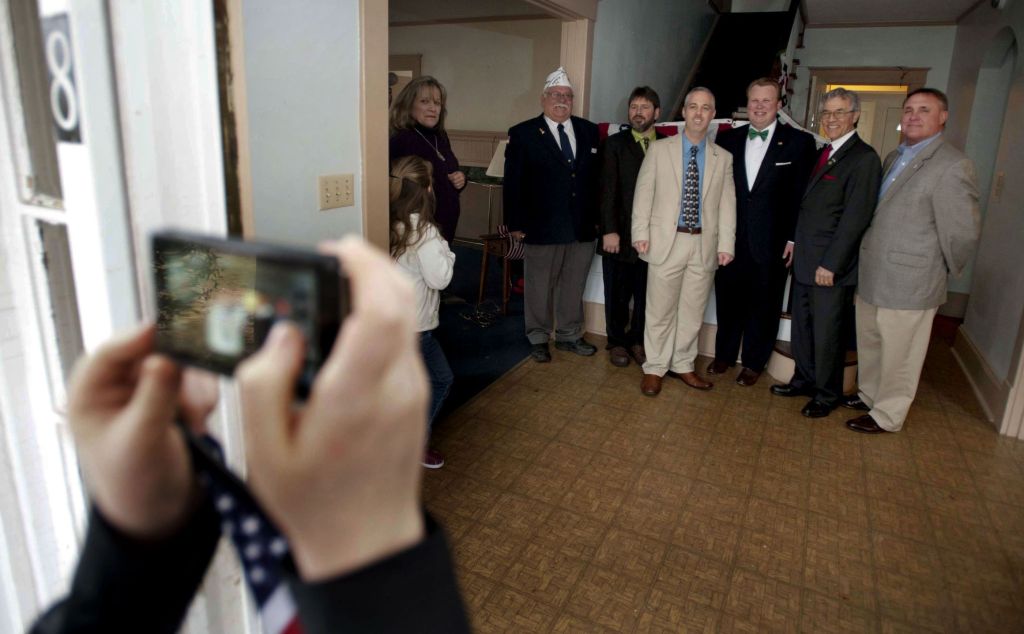 SPENCER — “May God bless this house and all who enter in” was the opening to a simple, yet poignant prayer marking the home where 28 homeless veterans will have a place to lay their heads.

The home, located at 418 South Carolina Ave., will be a transitional or permanent home for veterans suffering from mental illness and substance abuse. In about two months the home will be repaired and ready for veterans to make it their home.

State and local elected representatives joined officials with the Col. Abram Penn Veterans Foundation for a ribbon-cutting and blessing ceremony Monday afternoon. The Foundation closed on the property Friday and on Monday afternoon had a ribbon cutting to commemorate the milestone. The property was purchased for $50,000 and will be financed by the county over nine years.

Dr. Tim Heath, a mental health practitioner for Salisbury Psychiatric Associates, established the Foundation in 2012 and along with business partner, Mark Adams, also a licensed professional counselor, say the foundation will also provide veterans with case management services, such as medication management and transportation to and from the Hefner VA Medical Center. The foundation has worked in collaboration with the Hefner VA Medical Center and Health Institute Community Residential Care for Veterans.

The two-story, brick home is located a few blocks from downtown Spencer in a quiet neighborhood, which had sat unused for a number of years.

Heath said the home will need lots of repairs that will include painting, replacing carpets, repairing the ceiling and pipes in the basement. The foundation has beds and other basic furniture for the home, but will need kitchen appliances, Adams said.

Heath served in the Army Reserves and Adams specializes in working with patients who’ve suffered some sort of trauma including Post-Traumatic Stress Disorder.

The men credit Rowan County Commissioner Jon Barber with helping them acquire the home. Barber said he presented the request for the house to the rest of the board. Barber received information about the house abut 18 months ago.

Barber said he learned about how may homeless veterans there were and was concerned both as a citizen and an elected official who said his goal while in office is to see that citizens’ needs are met.

Barber said his goal is to look at other county-owned property to see if there is a similar use for it.

“North Carolina has the fifth highest veterans population. We’re doing as much as we can to help veterans. I’m happy to apart of it,” said Josh Ward, field representative for Sen. Richard Burr.

Burr’s office provided an American flag to the home that was flown over the United States Capitol.

“It’s a great effort to try to give back to those who have given so much to us in defense of our freedoms,” said Rep. Harry Warren, who also attended the ceremony.

“This is a well deserved endeavor,” said David Hand, president of the Rowan County Veterans Council.

Hand said it means so much to him and he’s glad the town of Spencer has supported the foundation in its efforts to get the housing.

“I’m so proud to see this happen. I hope to see many more,” Hand said.

Heath said the goal is to have more transitional housing throughout the county. The mission of the foundation is to have “no veteran left homeless.”

In addition to area and state dignitaries in attendance there was also members of the Rowan County Veterans Honor Guard who offered up a 21-gun salute. For more about how to volunteer for the Colonel Abram Penn Veteran’s Foundation, visit the website at www.goveteransgo.com or send donations to Col. Abram Penn Veteran’s Foundation, P.O. Box 3182, Salisbury, NC 28144.