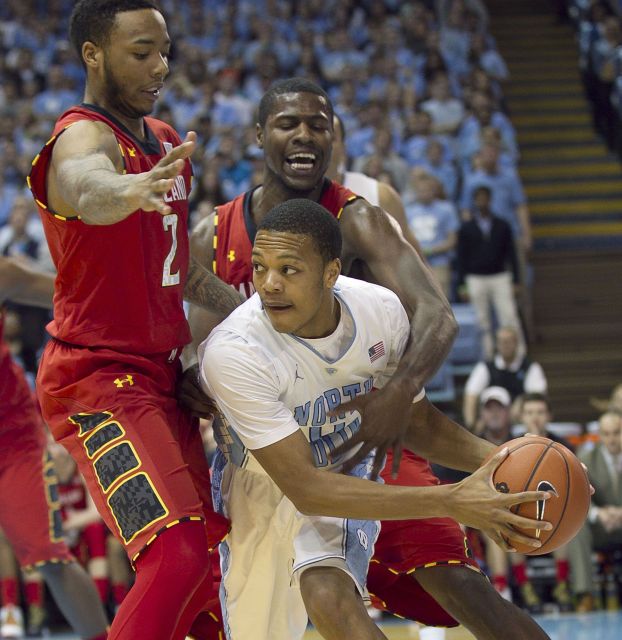 CHAPEL HILL — Marcus Paige was back to his high-scoring ways for North Carolina, while Brice Johnson provided the punch off the bench that helped the Tar Heels extend their winning streak to a season-long four games.
Paige scored 25 points to help UNC beat Maryland 75-63 on Tuesday night, while Johnson added 19 points on 8-for-8 shooting. It was the best scoring performance for either player in more than a month and comes as the Tar Heels (15-7, 5-4 Atlantic Coast Conference) enter a tough stretch of the schedule.
After an 0-3 start, the Tar Heels fought back to even their league record with last weekend’s win against North Carolina State. Now they head to Notre Dame on Saturday before returning home to host No. 11 Duke in the latest installment of the fierce rivalry followed by a visit from No. 25 Pittsburgh.
Having Paige and Johnson scoring like they did Tuesday — and earlier this season — would certainly help.
Paige scored 18 points after halftime in his best output since going for a career-high 32 points against Louisville in November. The team’s leading scorer had reached 20 points just once in the past 11 games.
“I’m just going to stay aggressive and keep attacking,” Paige said. “I always tend to attack a little more in the second half. I just wanted to be aggressive.”
Johnson, a 6-foot-9 sophomore, had scored in double figures in seven of the first eight games this year. But he had done it just once in the last seven — and that came with 10 points in Saturday’s win against the Wolfpack — while failing to shoot at least 50 percent in five of the past seven.
“I’ve just been doing in the same things, just trying to work on my shot with (assistant Hubert Davis),” Johnson said. “All those other games, it just wasn’t going in. But this game it was going in. I was very happy about that. I was sick of seeing the ball go in and out of the rim and not going in.”
“Me and him both,” Paige said later.
The Tar Heels scored the game’s first 12 points and jumped to a 19-3 lead, leading the entire night. They shot 49 percent and scored 19 points off turnovers while controlling the boards, though they struggled again at the line by making 19 of 37 free throws.
Still, North Carolina beat the Terrapins (13-10, 5-5) for the 14th time in 18 meetings. And UNC’s four wins during its current streak have all come by double-digit margins.
“Our confidence is building up as the games progress,” said freshman Kennedy Meeks, who had seven points. “We’re not getting a fat head. We’re really working hard in practice every day and just trying to focus on the next game.”
After Maryland rallied to within three following UNC’s early burst, the Tar Heels closed with an 11-2 run that pushed the margin to 39-27 at the break.
“To win, you can’t start a game that way,” Maryland coach Mark Turgeon said, “and you can’t finish a half that way.”
Maryland shot just 29 percent (8-for-28) in the opening half and 39 percent for the game. The Terrapins trailed by between six and 12 points throughout the final 171/2 minutes.
Dez Wells scored 18 points to lead the Terps, who couldn’t earn their first win in Chapel Hill since knocking off the then-No. 1 Tar Heels in 2008. It was Big Ten-bound Maryland’s final regular-season ACC game at the Smith Center, where the Len Bias-led Terps handed Dean Smith’s Tar Heels their first loss in the new building in 1986.
“We weren’t making shots, and we turned it over a couple of times and let North Carolina get out and run,” said Evan Smotrycz, who scored 14. “… We were battling (in the second half). We just didn’t capitalize on the chances that we had.”