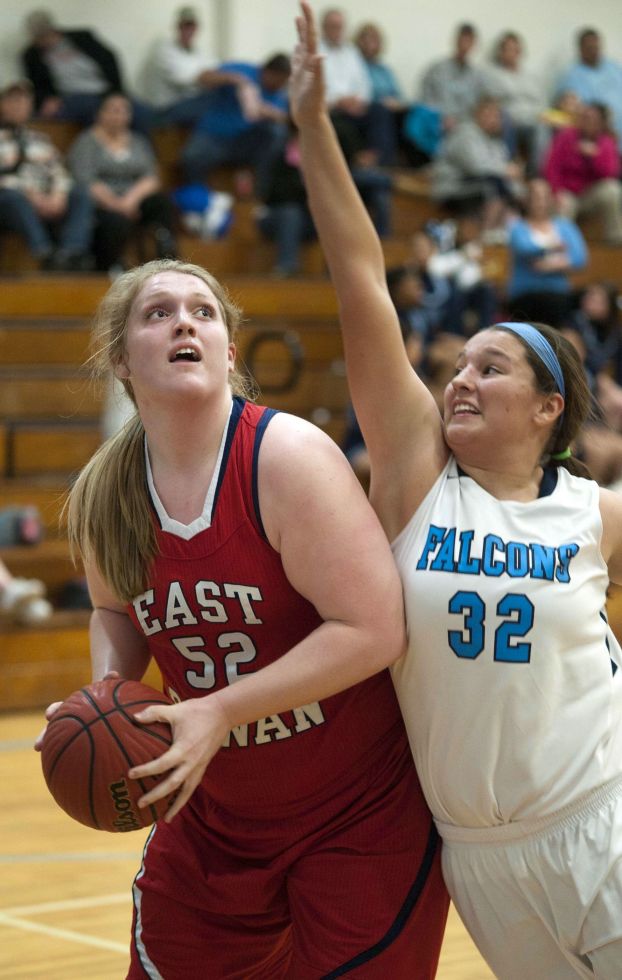 East girls on the verge of SPC title

MT. ULLA — East Rowan’s girls took another step toward a conference championship on Tuesday, shooting the lights out early and overwhelming West Rowan 79-36.
It was the most points East has scored in a conference game this season.
While East coach Danielle Porter can almost reach out and touch what would be the Mustangs’ first league title since 2004, she’s keeping her emotions harnessed.
East (16-3, 12-1) has a two-game lead, but its three remaining games are against its three closest challengers in the SPC – Hickory Ridge (tonight), Central Cabarrus and South Rowan, which handed the Mustangs their only league setback.
“We really need to hang some banners because it’s been a while,” Porter said. “But we definitely know it’s not over.”
East led 28-6 after a quarter and by 48-9 at halftime against a West team that is going through some stuff. Taylor Martin, the Falcons’ No. 2 scorer, was hurt Monday. Other Falcons (6-14, 4-10) who usually start didn’t start, a decision made by coach Ashley Poole.
“I think we learned some
“We learned some things tonight,” she said. “We probably learned more than we have in some of the close games we’ve lost.”
Lauren Thomas hit five 3-pointers and led the Mustangs with 18 points. Karleigh Wike had an average night for her — 12 points and 15 rebounds.
UNC Asheville and Coastal Carolina coaches were on hand to see Kelli Fisher, and the junior powered in 15 points on 6-for-9 shooting and grabbed eight boards.
The Pharr twins, Shenell and Shenique, who give East some quickness, teamed for another 15 points. Jocelyn Lowe ran things smoothly, and Amani Ajayi, Shelby Benge and Melonye McCree also were in the scorebook before halftime.
“Lowe doesn’t get a lot of attention, but she’s been a key for us,” Porter said. “She makes some physical errors, but she makes the right reads every time. She sees and understands the game.”
West sophomore Khaila Hall is talented enough to make things interesting almost by herself, but the Mustangs did a good job on her.
Hall scored 17, but she was 6-for-25 from the field.
“It’s been instilled in us at practice that defense is always the most important thing,” Thomas said. “We can hold teams down even when our shots don’t fall.”
This time they fell, and not just Thomas’ bombs. East shot 57 percent in the first half.
“I’ve been waiting for our offense to come to around and we showed some life tonight,” Porter said. “It’s fun to watch Lauren shoot and she was on, but everyone performed their roles well tonight.”
EAST ROWAN (79) — Thomas 18, Fisher 15, Wike 12, Shenell Pharr 9, Shenique Pharr 6, McCree 6, Lowe 5, Ajayi 4, Benge 4.
WEST ROWAN (36) — Hall 17, Q. Miller 6, Greene 4, Goddard 3, Alessandrini 3, S. Miller 2, Chambers, Lovell 1, Cowan, Yow.
East Rowan 28 20 12 19 — 79
West Rowan 6 3 14 13 — 36