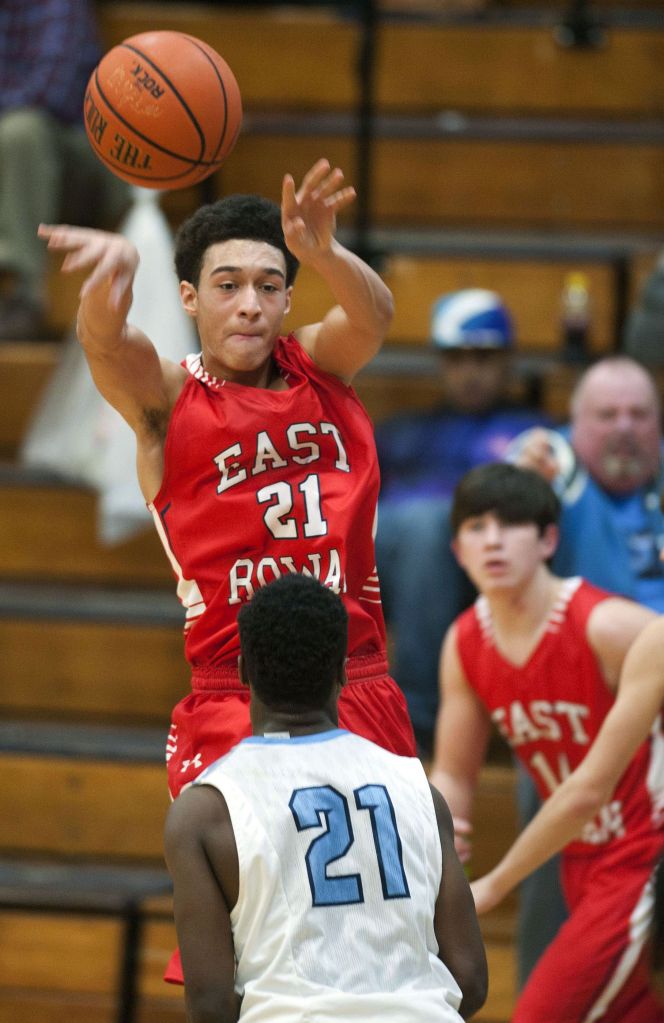 MT. ULLA — East Rowan coach Trey Ledbetter was tagged for an early frustration technical, and on a night when he wanted to stand up and cheer, he had to stay seated on the bench.
“I guess we play a lot better when I sit,” said Ledbetter, who has maintained his sense of humor through a difficult season.
East’s boys hadn’t won a game since they beat West Rowan on Dec. 19 in Granite Quarry, but they fed off a spree of swished jumpers from Austin Love and Donte Means and upset West Rowan 63-58 in Mount Ulla on Tuesday.
“It was just time for us to get a win,” Love said. “I was determined. We all were determined. We wanted to beat West. We wanted that sweep.”
Last-place East, which is almost certain to be the one team left out of the nine-team SPC’s league tournament, did sweep the middle-of-the-pack Falcons. It was East’s first sweep of West since the Justin Vanderford-Kenan McKenzie-Shawn Eagle team of 2008 accomplished the feat.
“You sweep West, you’ve done something,” Ledbetter said. “You beat a Mike Gurley-coached team at West, and you’ve done something. I’m very happy for our guys. They needed this.”
They needed it in the worst way, and some of the Mustangs were red-eyed with emotional tears as they emerged from the locker room.
It’s been a tough hoops season for East football heroes Seth Wyrick, Samuel Wyrick and Dock Corpening, but they were instrumental in the victory: Seth Wyrick for his fourth-quarter defense against West bomber Seth Martin, who was threatening to beat the Mustangs almost single-handedly, and Samuel Wyrick and Corpening for their work on the defensive board.
West (11-10, 6-7) missed an awful lot of jumpers, and there were an awful lot of one-and-dones because Corpening, Samuel Wyrick and Joshua Moses boxed out and grabbed the rebounds.
Martin hit two early 3s to put East (4-15, 2-11) in a hole, but then Love got hot. The Falcons needed a Najee Tucker jumper to close the quarter with a 14-12 lead.
Greg Joseph’s stickback gave West a 29-23 halftime lead, and the Falcons led 37-27 in the third quarter after Martin buried two more 3s.
But then the Mustangs began to climb back into it. East went to a triangle-and-two focused on stopping Martin and Daisean Reddick, and with Seth Wyrick faceguarding Martin, West’s offense stopped .
Two free throws by Means gave East a 39-39 tie as the fourth quarter started, and Seth Wyrick found Love open for the 3-pointer that gave East a 42-39 lead.
“We were really inspired tonight,” Seth Wyrick explained. “I focused on defense and shots were dropping for Donte and Austin. When the shots fall, we can play with most people.”
When East scored nine points in a hurry— two 3s by Love and one by Means — it suddenly led 51-42 with 2:50 left.
After that, it was a matter of making free throws, and the Wyricks made them.
“We wanted to play fast and physical and we did that,” Ledbetter said. “West had a tough game Monday. We thought West might wear down, and it looked like they didn’t have their legs on their shots at the end.”
Gurley took the loss calmly.
“After a heated game Monday (with Carson), we just ran out of gas,” he said. “ Give credit to East. Love made some big-time 3s.”