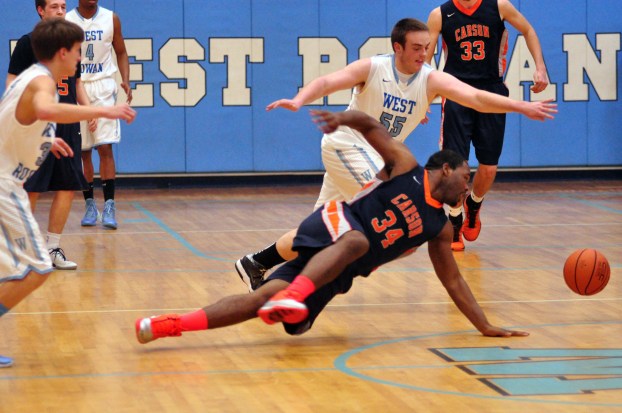 MT. ULLA — Carson coach Brian Perry looked up at the scoreboard at halftime, saw his team trailed West Rowan by seven and still felt good about things.
Perry was well aware Tre Williams hadn’t scored yet.
Williams, a 1,000-point scorer, came through with 17 in the second half to help out 1,000-point scorer Colton Laws, who finished with 23.
Carson’s dynamic senior duo accounted for 31 of the Cougars’ 37 second-half points and they stormed back to win 58-54 on the road against their county rival.
“West did a great job in the first half of hitting the boards, controlling the pace and shutting down our transition game,” Perry said. “They caused us all kinds of trouble, so we did feel very fortunate to be down only 29-22 at halftime.”
West’s student section saves its best for Carson and was in rare form on “Patriotic Night.”
Cross country champ Rebecca Parker appeared in full Miss Liberty costume and probably could’ve sold $2 million in savings bonds. Golf hero and cheer-igniter Jake Kennedy sported the star-spangled trousers he usually saves for The Fourth of July.
American flags waved, and a balanced bunch of Falcons matched the energy of their students in that first half, especially burly Chris Hassard and agile Najee Tucker. They held their own on the glass with the towering Laws and MyQyon Stout.
Carson needed eight points by Marquez McCain in the first half to keep from being blown away.
“We struggled in the first half,” Laws said. “We knew we had to make the first three minutes of the second half ours.”
West led 33-24 when Williams made a layup with 3:45 left in the third quarter. That was a turning point. He was dynamite the rest of the way.
“When Tre gets going, it’s really hard to stop him,” Laws said. “When he scored, we knew we might get on a roll, and we did.”
West (11-9, 6-6) collapsed late on Friday against Central Cabarrus, but there was no collapse in this one.
“With the kind of effort we had tonight, we’re usually going to be successful,” West coach Mike Gurley said. “We were getting good drives. We were executing our offense. But the ball just stopped going in the hole. I thought we played as a close team tonight — like 12 brothers — but we started having great possessions that ended with zero points.”
When Carson’s Darren Isom dunked early in the fourth quarter, it was 36-all.
That was the only second-half field goal by the Cougars that didn’t come from Laws or Williams.
When Jacob Raper found Williams for an open 3, Williams drilled it, and the Cougars charged in front 41-39 with 5:30 left.
Carson went up by four, but back-to-back 3s by Seth Martin and Daisean Reddick sent the Falcons ahead 45-43 with four minutes left.
Reddick, who fired from right in front of his student section, saluted the students like a soldier, and the crowd roared louder.
Tucker went coast-to-coast with a defensive board for a 51-48 West lead with 2:40 left, but after that it was all Carson.
Laws’ stickback cut West’s lead to 51-50, and when Hassard missed two free throws, Williams got the rebound and cruised end-to-end for a pivotal “and-one” with 2:10 left.
The backbreaker was a Laws stickback of a missed free throw with 1:29 left for a 55-52 Carson lead.
“We played hard,” Tucker said. “But they deserved to win this. We knew they’d make their run, but we didn’t make the plays that would’ve stopped them when we had the chance.”
Carson is 19-3 in its last 22 county games.
CARSON (58) — Laws 23, Williams 17, McCain 10, Raper 5, Isom 2, Stout 1, Rucker.
WEST ROWAN (54) — Martin 12, Reddick 10, Tucker 9, Hassard 8, Long 7, Weeks 4, Joseph 4, Phillips, Morris, Wood.
Carson 9 13 12 24 — 58
W. Rowan 13 16 7 18 — 54