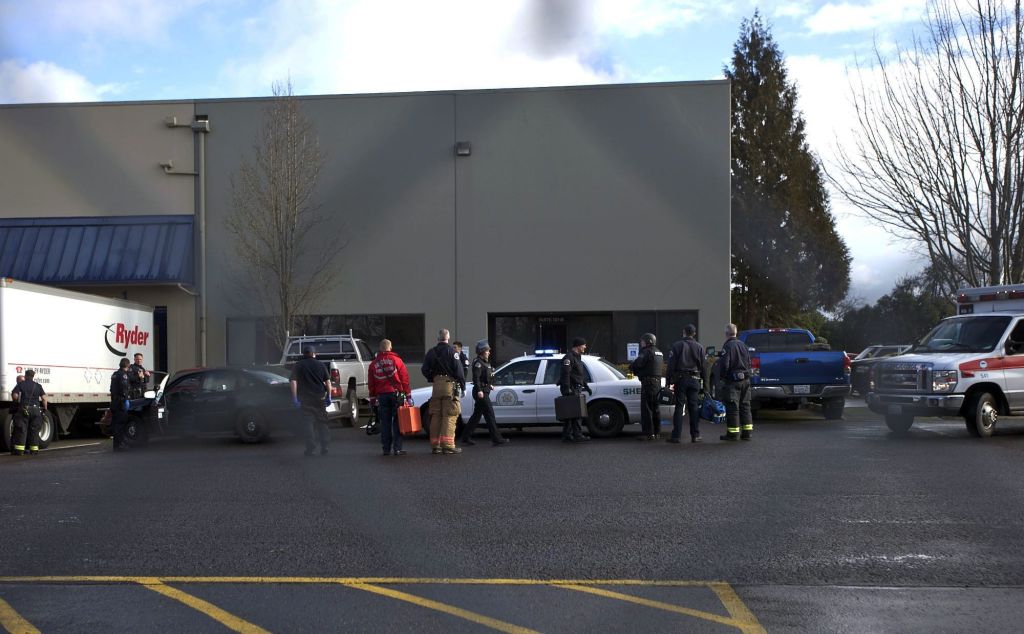 VANCOUVER, Wash. (AP) — A paint company driver fatally shot a company manager and then killed himself Monday at a business park in this southwest Washington city.
Police found the manager, Ryan E. Momeny, 45, lying dead in front of the Benjamin Moore Paint distribution center, police spokeswoman Kim Kapp said. Robert R. Brown, 64, a company driver, was found inside a vehicle in the parking lot, dead from what appeared to be a self-inflicted gunshot wound, Kapp said.
Police continue to investigate but are not looking for anyone else in the shootings, Kapp said in a statement late Monday. She did not discuss a motive.
No one else was injured in the gunfire just before noon, Kapp said.
A nearby school was briefly locked down as a precaution when shots were first reported.
The business is in an industrial park next to a state highway. At least four police cars were at the scene hours after the shooting.
In a statement, Benjamin Moore said it was “deeply saddened” by the shooting.
“We continue to gather details of what happened, and are working with law enforcement as they conduct their investigation,” spokeswoman Kimberlee M. Bradshaw said.
Momeny, of nearby Camas, was a Seattle Seahawks fan who was wearing a Seahawks football jersey on Monday, the day after the team’s Super Bowl victory, The Oregonian reported.
Brian Cote said Momeny gave him a job at the warehouse after he left the Marine Corps in 2007.
“He was a great guy — a family man, never swore, clean-cut, respectful of everybody,” Cote told The Oregonian. “I can’t imagine anyone hurting that guy. He was nice to the point where you wanted to ask him, ‘Don’t you ever have a bad day, bro?”’
Cote said he left the company after about six months to study sports medicine.
Another Benjamin Moore Paint truck driver, Sergey Sizmin, told The Columbian newspaper he has worked for the company for seven years.
“I’m so shocked,” Sizmin said. “Everybody’s friendly, everybody here works nicely together.”
Vancouver is near Portland, Ore., on the north bank of the Columbia River. It’s the fourth-largest city in Washington, with a population of more than 161,000.
Kendra Abdich, 24, said she heard two loud bangs at about 11:30 a.m.
Abdich, who lives one block from the office park, said workers often load and unload trucks at the businesses, and sudden, loud noises aren’t unusual.
But Abdich said she soon saw several police cars “flying by,” and checked her computer. She saw news reports and realized she lived about 100 yards from the scene.
“It’s not normal out here,” Abdich said. “It’s a little scary.”