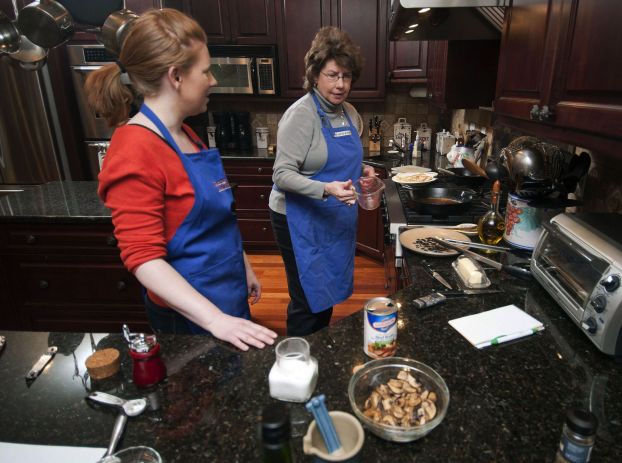 The secret’s in the sauce for chicken marsala

The day I visited her Salisbury home, she kept it simple, showing me how to make chicken marsala with a unique twist. The recipe typically calls for chicken stock, but she uses beef stock – a trick she learned from a cooking class at The Stocked Pot in Winston-Salem.

“It makes the flavors richer,” she said.

Mills has taken about 65 such classes since she got interested in the culinary arts more than 30 years ago.

“I helped my mom a little growing up, but didn’t start to cook in a serious way until a couple years after I got married,” she said.

Mills taught me how to make chicken marsala because not only is it easy, it’s also quick and can be made in advance and frozen.

“It heats up really well,” she said. “You can make it with chicken, pork or veal; you can just look in the freezer and use what you’ve got on hand.”

We started off by sautéing fresh mushrooms in a cast iron skillet. Mills added about a teaspoon of butter to the pan along with a little olive oil.

“If you need more you can always add it, but you can’t take it out,” she said.

Some people might just use one or the other, but she’s found a combination of the two is a good option.

After the butter starts foaming, it’s time to add the mushrooms. Within a few minutes, they were done, so we scooped them in a bowl and set them to the side.

Prepping the chicken was simple. The only seasonings needed are salt and pepper.

Mills buys thin cut chicken to avoid having to pound large pieces down, but either is fine.

It took less than four minutes per side to brown the chicken. We added more butter and olive oil to the pan before sautéing a minced shallot.

The marsala wine and herbs went in next.

Mills ground the spices after measuring them, a trick I plan to use in the future. No fancy tools are required.

“You can just rub them between your hands to release the oil, so you have more flavor,” she said.

“If it calls for a tablespoon (of fresh herbs) just use a teaspoon because dried herbs are much more concentrated.”

After adding the beef stock and cornstarch, used to thicken the sauce, we let it simmer for about two minutes before removing it from the burner.

The final step is easy, simply pour the mushrooms and sauce on top of the chicken.

Mills said she often serves the chicken marsala with rice pilaf, orzo, a mashed potato casserole or some type of pasta.

The end result was fantastic. I’ve had my fair share of chicken marsala, but this was above and beyond. It had a savory taste that seemed to linger in my mouth longer after I was finished. The beef broth punched up the taste quite a bit.

Mills pointed out it’s easy to cut the recipe in half or multiply it for dinner parties.

It was quiet in Mills’ kitchen the day I visited, but she often likes to have people there talking.

“I love cooking, it’s relaxing,” she said. “It’s part of a creative process, I enjoy anything where you’re creating something whether it’s knitting, sewing or cooking.”

Mills said she can sit down with a cookbook and read it like a novel.

“I like learning new things,” she said. “I’ve got a fairly big cookbook collection.”

But Mills admits things don’t always turn out quite right.

“Right after we got married, I pulled out a recipe from Southern Living for chicken enchiladas,” she said. “It sounded great, so I decided to make them for company.”

Mills said she tasted the sauce and filling separately and both were pretty good.

“I put it all together and we couldn’t even eat it,” she said. “It was awful.

“Yes, I did try the dish again and yes, it was just as bad the second time; I never made it again.”

Sarah Campbell is the former lifestyle editor of the Salisbury Post.