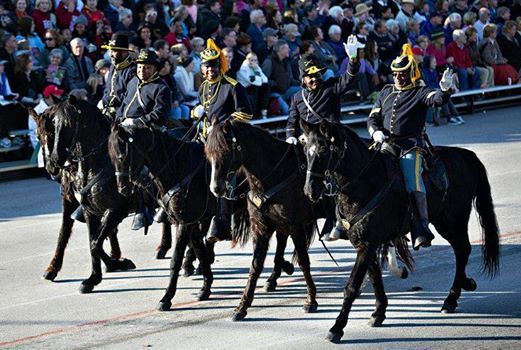 SALISBURY — A lot of Willie Edley Jr.’s friends looked twice at their television screens on New Year’s Day as they were watching the Tournament of Roses Parade.

Was that Willie, riding with the Buffalo Soldiers?

Yes, that was Edley on top of a borrowed horse named Trouble and trotting down the parade’s “Camera Alley,” where the bleachers on both sides of the street are filled with so many spectators it could pass for a football stadium.

Those lights, the huge crowds and the pageantry behind all the floats, bands and other parade entries seem to hit you all at once.

It sort of takes your breath away, says Edley, a Salisbury resident and, for the past four years, national president of the 1,200-member Ninth & Tenth (Horse) Cavalry Association, also called “The Buffalo Soldiers.”

“I have been in a lot of parades and done a lot of activities,” Edley says, “but I had no idea what it took to organize and orchestrate that Rose Parade.”

Edley’s wife, Velma, sent him a text telling him of all the calls she had received from friends, family and fellow Buffalo Soldiers who spied him on television.

“Some of them weren’t sure it was me,” Edley says. “My phone was just blowing up right after the parade and through the rest of the evening.”

The Tournament of Roses Parade in Pasadena, Calif., was the most recent Buffalo Soldier adventure for Edley, who presides over 40 chapters from coast to coast and also belongs to the association’s Greater North Carolina Chapter, which includes president Clinton Browne of Salisbury.

Edley appeared in the Rose Parade at the invitation of Larry Thorton in Los Angeles and the New Buffalo Soldiers, who are regular participants.

In his presidential duties for the Ninth & Tenth (Horse) Cavalry Association, Edley attends a lot of banquets, officer installation services, color guard presentations and parades. On a local level, he has participated in educational programs at many schools.

But the Rose Parade was something Edley had wanted to participate in for a long time, even though his 14-year-old gaited horse, Gent, couldn’t make the long trip.

“I have a pretty good mount,” Edley says proudly.

As a young man, Edley served as a paratrooper in the 82nd Airborne, and he laughs when he says he had “the big head to go along with that.”

It was back then, he and some fellow African-American buddies referred to themselves as Buffalo Soldiers, and it was after he left the Army and joined the N.C. National Guard that Edley became interested in the history behind the black cavalrymen.

The 9th and 10th Calvary Regiments of “colored” men, authorized by Congress, date back to 1866. The 9th Cavalry Regiment took root in Greenville, La., and the 10th Cavalry was activated at Fort Leavenworth, Kan.

Later, two other African-American regiments of foot soldiers also were formed — the 24th and 25th Infantry.

For more than 20 years, the 9th and 10th Cavalry Regiments fought against Native American tribes on the western frontier, from Montana to territories in the Southwest.

Indians of the Plains are believed to have given the black regiments the “Buffalo Soldier” name, because they saw a resemblance between the black men’s hair and the manes of buffalo.

“Another reason,” a chapter history says, “was when a buffalo was cornered or wounded, he fought ferociously, showing unusual courage and stamina, a quality the Indians also saw in the fighting spirit of the black cavalrymen.

“The buffalo was sacred to the American Indians; … therefore, the Buffalo Soldiers were found worthy of tribute.”

As the military remained segregated, Buffalo Soldiers fought in every major conflict, through World War II.

To keep the history of Buffalo Soldiers alive, the association was formed with the idea of holding annual reunions — the first occurred in 1967 in Fort Riley, Kan.

At first membership was limited to men who had served in the all-black regiments.

Edley has belonged to the association about 17 years.

For the Rose parade, Edley traveled to Los Angeles Friday, Dec. 27, in advance of the Wednesday event.

He attended a gala the night of Dec. 28 for all the equestrian groups. It was a great chance to meet old Western movie stars and other horsemen in the parade, he said.

As part of the Buffalo Soldiers entry, Edley was one of 16 troopers in the cavalry’s dress uniforms. There also was a Western wagon carrying some of the wives of troopers. They all had to be in a staging area by 11 p.m. the night before.

Organizers shut down a major highway in Anaheim in advance of the parade, and the Buffalo Soldiers spent their night under a bridge.

Edley was surprised at how cold it was that particular night. The wives made chili, and everyone grabbed what sleep they could before a 4 a.m. wake-up call to start getting their horses ready.

The parade itself began at 8 a.m., and Edley rode the route for two hours.

The parade organizers provided a lunch later. Edley and his group had a debriefing on site, loaded up the horses and wagon and went on to a social. But all the parade participants were so tired they didn’t stay long.

Edley flew home to North Carolina the next day.

Edley has been riding horses his whole life. He grew up in Union Springs, Ala., and first enrolled at Miles College in Birmingham before joining the Army.

He later attended Pembroke University and the University of North Carolina at Charlotte to earn a degree in business administration.

Edley, 61, is retired now after a 30-year career as a prison administrator with the N.C. Department of Corrections, finishing with the Piedmont Correctional Center in Salisbury.

He also served 20 years in the N.C. National Guard and was deployed to the Persian Gulf as part of Operation Desert Storm in the early 1990s.

Edley says the N.C. chapter and national association give out annual scholarships to students who submit essays.

Some of the things on his agenda as president include establishing a national headquarters in Houston to go along with that city’s Buffalo Soldiers National Museum.

The association also is looking to form a partnership with the National Parks Service to provide an outreach program for under-served youth.

“This marriage with the Park Service is a natural fit,” Edley says.

In the late 1800s, troops from the 9th Cavalry Regiment and a company of the 24th Infantry Regiment served in California’s Sierra Nevada as some of the first national park rangers.

Capt. Charles Young of the 9th Cavalry became the first black superintendent of a national park (Sequoia and General Grant parks) in 1903.

Members of the 9th Cavalry also built the first trail to the top of Mount Whitney, the highest mountain in the contiguous United States.

Edley will be going west again later this year to the association’s annual reunion in Denver.

“Wherever we go, we try to make a historical connection,” Edley says.

Association members plan to travel to a town outside of Denver where a historic marker notes the grave of Cathy Williams.

Somehow, during the first three years Buffalo Soldiers were in existence from 1866-68, Williams went by the name of William Cathey and hid the fact she was female.

Today’s Buffalo Soldiers have much more to their rich history — a legacy Edley and others won’t let people forget.