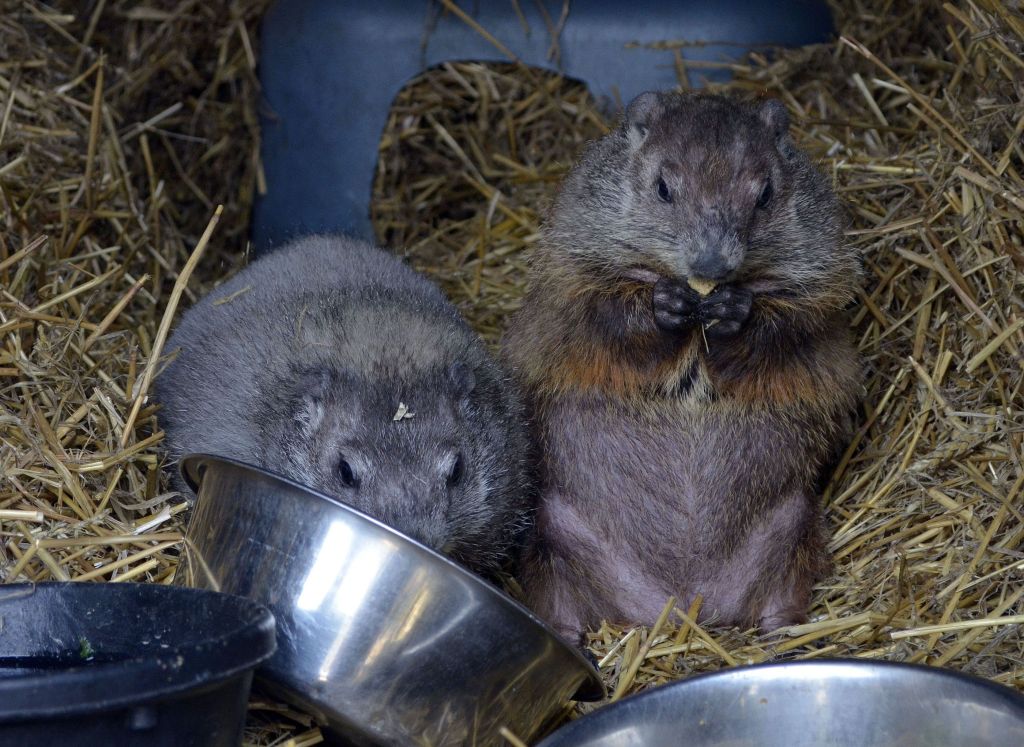 SALISBURY — After all the cold weather we’ve been having, Sunday probably felt like spring to many people in Rowan County.
As luck would have it, the warm weather here coincided with Groundhog Day.
Punxsutawney Phil, the groundhog whose predictions were made famous in the film “Groundhog Day,” was said to have seen his shadow in a Sunday morning ceremony in the Pennsylvania town for which he’s named.
According to folklore, that means six more weeks of winter weather.
But at Dan Nicholas Park, the two groundhogs kept there, Shadow and Tribble, emerged from their burrow of straw and looked nonchalantly out at the blue skies and sun.
David Jones, a naturalist at Dan Nicholas Park, didn’t do any coaxing.
As a staff member brought food bowls and set them in the front of the large, straw-filled hutch where the groundhogs spend the winter, there was no sign of activity.
About 20 minutes later, a gray nose poked out from the hay.
Shadow appeared, looked around, poked at the food, and then retreated long enough for his brother to emerge from the burrow.
They then took to the bowls and calmly ate their lunch of carrots, celery, greens and nuts without any visible signs of worry from the sunlight.
Looking on, Jones said he didn’t want to make any weather predictions based on what he’d seen.
But he did say he wasn’t surprised they came out Sunday, “just because it’s as warm as it is.”
Bob Pendergrass, Nature Center supervisor, said Tribble and Shadow were brought to the park after having been rescued following a landscaping accident that destroyed their mother’s burrow.
They’re less than a year old. “We use them in programs some, with schoolkids and people in general,” Pendergrass said.
“Groundhogs have more personality than other animals we have,” Pendergrass said. “They’re not very popular with gardeners who have bulbs, because that’s what they eat in the wild. But they are very interesting animals.”
But, can they predict the weather?
“Well, I think they’re probably like the other weather forecasters out there,” Pendergrass said. “It seems to swing pretty far these days. I mean, we were dealing with snow and ice last week, and I’m not wearing a jacket today.”
Still, Pendergrass said, the groundhogs are probably better at predicting the weather than people are.
Legend has it that the traditional Christian feast day of Candlemas, on Feb. 2, was a day on which groundhogs’ actions predicted the rest of the winter to come.
If a groundhog sees its shadow on that day, the folk tale says there’s more snow and ice to come.
In Punxsutawney, Pa., Groundhog Day celebrations have been going on since 1886.
Jones said groundhogs do typically sleep away the winter months, although the pair of males at Dan Nicholas Park have been rehabilitated and are handled regularly.
In the wild, Jones said, “they’re obligate hibernators, whose temperature drops dramatically. They sleep through the wintertime.”
Groundhogs, also known as woodchucks, hibernate for the same reason as black bears do. In the winter months, their food sources tend to disappear.
When park staff member Sabrinah Hartsell brought lunch out to Tribble and Shadow, she said the pair are “like little babies,” loving to be handled.
But Jones advised against trying to approach groundhogs, or any wild animals, as they have been known to bite.
Elsewhere in the park, some animals were seen enjoying the afternoon sun.
One of the black bears was sunning himself on a granite rock not far away, while foxes, a bobcat and a red wolf were also out in their respective habitats.
Unlike the hibernators, Jones said, wolves are very active this time of year. “February is their typical breeding season,” Jones said.
But they’re not known to predict the weather.
And, truth be told, groundhogs aren’t very good at it, either.
According to published reports, groundhog predictions since the 1880’s have been accurate less than 40 percent of the time.
Not to mention, as was seen Sunday, the groundhogs themselves don’t agree all the time.
“My mind tells me it (winter) ain’t through with us yet,” said Shirley Nance, of Albemarle.
She and her family were out at Dan Nicholas Park on Sunday, enjoying the warmer weather and visiting the Nature Center.
“The groundhog’s usually right,” said Gary Allen, who was with his wife, a member of the Nance family.
“No, they ain’t half right half the time!” Nance said. “I’m 73 years old.”
But, she said, the groundhog’s track record was “about as good as the weatherman” at predicting winter weather.
Over at the nearby barnyard, park staff member Angela VonCannon, said she thinks there’ll be six more weeks of winter.
After all, she said, there’s a winter storm forming to the west that will bring more snow and ice to the northeast, although the National Weather Service is predicting cold rain here in Salisbury.
Asked if she wanted the cold to continue, VonCannon’s answer was an emphatic “No!”
Like many local residents, she’d be just as happy for spring to get here sooner, no matter what the groundhogs say.

Scouting for food: Thousands of pounds collected for locals…