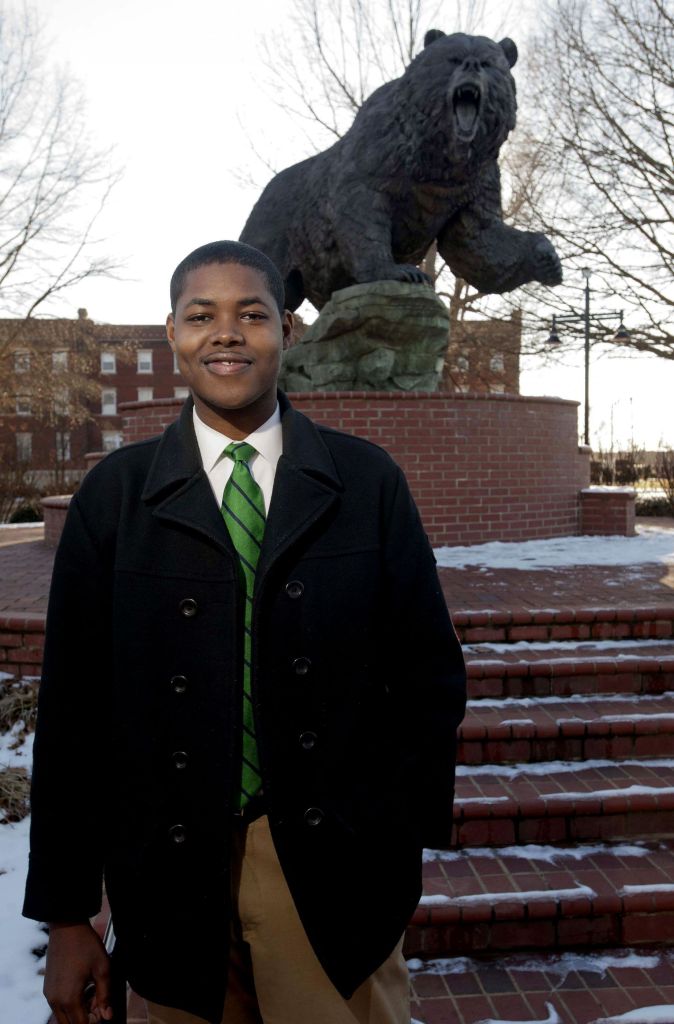 Christopher Pierre is an impressive young man. A senior at Livingstone College, he’s headed to law school in the fall.

Christopher, 21, grew up in a mostly white neighborhood, and graduated from a mostly white school. His mother encouraged him to attend a historically black college.

“I felt it was a missing piece in my education,” Christopher says. “I couldn’t be more thankful that Livingstone gave me that.”

The son of Wilner and Cecelia Pierre, Christopher is from Weddington, near Monroe. Christopher and his parents moved from Virginia to North Carolina a decade ago. His father, a retired physician, now works a second-career as pastor at their church. His mom, who has been a guidance counselor and served as her husband’s office manager, now works with him at church.

“It was good for Christopher to have that balance,” his mom says of his time at Livingstone. “It’s been a positive experience for him. It’s important to respect all people and look at people as individuals You have to be able to work with all different kinds of people.”

Christopher says that his high school, Marvin Ridge, is totally different from Livingstone.

“It was a great place to go to high school,” he says. “Both schools have molded my education, giving me different perspectives.”

Out of 300 students in his graduating class, Christopher was one of 17 black students. He says it wasn’t unusual for him to be the only black student in an AP class.

At Livingstone, however, his first class was an English class with Dr. Da’Tarvia Parrish. The first day, they read a slave narrative. The material made an immediate impression on Christopher.

“It was what I was missing being at Marvin Ridge,” he says. “There’s profound literature from your culture that’s promoted. That’s what made coming to Livingstone so beautiful.”

When President Obama was elected, there was discussion that America had entered a post-racial society.

“We definitely aren’t in a post-racial society,” Christopher notes. “Racial discrimination is more clandestine and covert. It’s still there, but it’s not politically correct to discuss it. We’ve made huge strides. There are people who truly care and truly try to make things better. We have come a long way, but I feel like there’s still work that needs to be done.”

At Livingstone, Christopher has immersed himself in college life. He attended the National African-American Honor Society Conference competition his freshman year. Sophomore year, he went to Los Angeles to compete in the Honda Campus All-Star Challenge. He served as sophomore class president and is president of his senior class and the Political Science Club. He’s a political science major, but he’s widely read. He likes reading about people who do not share his political views, so he can understand their motivations and why they believe the way they do.

He’s taken the LSAT, which he calls a “grueling test,” and is in the process of applying to law school. One school, Howard University, is historically black; the other two, the University of Miami and the University of Florida, are not.

“I wanted to branch out and meet different people,” he says of his decision to apply to these schools.

Christopher at first thought he’d study corporate law, but then spent this past summer in Chicago, at the Illinois Institute of Technology’s pre-law scholars’ program. There, he found other areas of law that interested him, so he’s keeping it open for now, he says.

At Livingstone, he cites Parrish as his favorite instructor.

“She got me active, and she’s been that guiding hand,” he says. “She’s definitely been part of my success.”

“As a student at Livingstone College, Christopher has distinguished himself as a leader of leaders,” Parrish says. “His leadership is innate and his civility is second to none.”

She adds, “As a student in my History of American Minority course, Christopher excelled beyond my expectations. His ability to grasp and convey historical and political concepts are commendable. This analytical thinker consistently applied his classroom education with his daily life, a satisfactory feeling for all educators.”

Christopher says he hasn’t nailed down his summer plans yet, but plans to go to law school right away.

“I’m the kind of person who feels like I always have to be doing something,” he says. “If I could start school early, I would.”