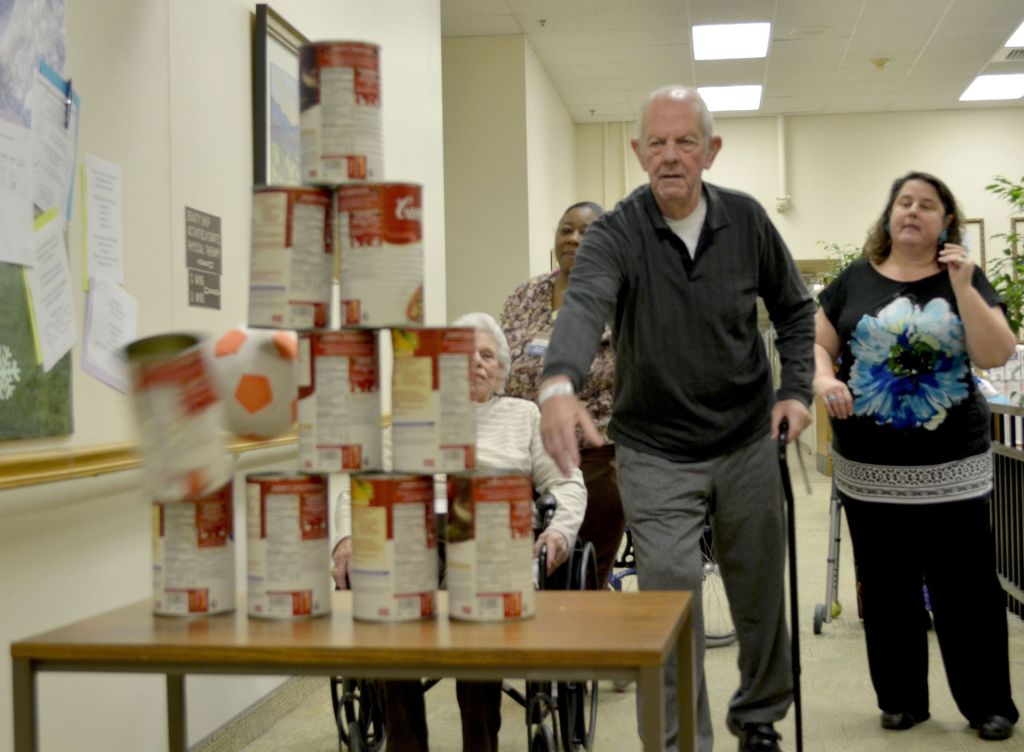 This year, the final evening of the event coincided with Super Bowl Sunday.

And, just as fans of the Broncos and Seahawks can get a little competitive,

Teams pitted staff, volunteers, residents and family members on teams against one another in friendly competition.

“But then, it snowballed,” Zimmerman said.

Sunday evening, she stood by a bulletin board with tallies of food, week by week.

From just over 200 pounds at the first weigh-in, the totals skyrocketed as more family members and staff got involved.

As Zimmerman was giving her interview, members of one team rolled up a cart with boxes of canned food.

Allison Eanes, member of the “Pink Team,” said it wasn’t enough to win over their rivals, the “Green Team.”

“You didn’t lose,” Zimmerman told her. “You put food on somebody’s table.”

All told, Trinity Oaks Health & Rehab had collected some 3,865 pounds of food by the time the Super Bowl kicked off.

“I was just really pleased with the competition,” said Steve Drinkard, admission coordinator at Trinity Oaks and member of the Rowan Helping Ministries board.

In a phone interview, Drinkard said the competition between teams had been fun.

“In the end, we all won, and Team Rowan Helping Ministries won,” Drinkard said.

The demand on the local charity’s food pantry has been severe in recent weeks, but Drinkard said these donations, coupled with food drives by local Scouting groups and churches, would help relieve the strain.

“The needs are as great as they’ve ever been,” Drinkard said. “People are still out of work, plus the weather has been brutal.”

When it comes to needing food aid, staffer Lillian Thompson said, “it could be any of us, and you’d want someone to reach out to you. So, it’s easy to give.”

While others prepared for their own “big game, part of the night’s festivities included the “Souper Bowl.”

Each can knocked over scored a point for the thrower’s favorite team, the Broncos or the Seahawks.

Ray Beattie knocked down four cans for the Broncos.

The Broncos were leading, 9 to 4, when Maxine Casper stepped up to throw.

Her first ball missed wide. With her next throw, she knocked over four cans and doubled the score for her team, the Seahawks.

Smiling, Casper said her boy had worked for Microsoft, which was based in Seattle.

“Bill Gates was so good to my son,” Casper said. “I have to pull for the Seahawks.”

After the final weigh-in for the food drive, a group gathered in the activity room to watch the Super Bowl on the big screen.

Meanwhile, the food collected will be delivered to the Rowan Helping Ministries pantry Tuesday.