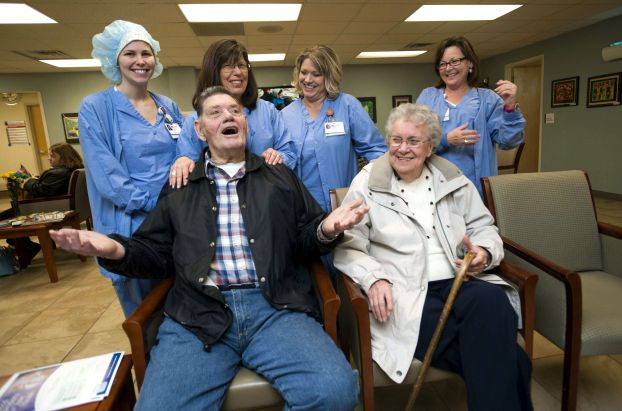 If you’re going to have a heart attack, hospital is the place to be

Statistics tell us that if you go into cardiac arrest, the best place to be is in a hospital.
Ed Wilson can tell you that’s absolutely true. On the morning of Feb. 12, 2013, Ed’s wife, Nada, was at Novant Health Rowan Medical Center, about to undergo a left knee replacement. Her nurse, Ann Hatchett, was helping her get prepared for surgery.
Suddenly, Ann heard “code blue” for the outpatient waiting area.
“Something just told me to go,” Ann says.
Ann ran from Nada’s bedside into the lobby. A visitor and nurse Karen Collins, Ann’s co-worker in surgical services, had Ed down on the floor. Nurses Robbin Shinn and Donnie Canup also came to assist, as did Shawna Gray, a nurse anesthetist.
One look and they all knew Ed was in full cardiac arrest. His heart had stopped.
Ann started doing chest compressions as other staff members poured into the room.
“The lobby was full of people,” Karen says, “but we didn’t see anybody else. We were focused on Ed. It was so obvious he was in cardiac arrest.”
Karen turned on the defibrillator, placed the monitoring pads on Ed’s chest. The machine read “shock advised.” Karen shocked Ed’s chest and his heart restarted. Ed was then taken to the emergency department and later the ICU.
It was all over in a matter of minutes.
“Oh! It was just amazing,” Karen remembers. “It’s rare that you find somebody whose heart is in shockable rhythm.”
That means they could restart Ed’s heart. And they did.
Ed Wilson can’t say “thank you” enough.
ggg

Nada, 85, had almost decided not to have surgery that morning, but Ed, 77, pushed her to go ahead. “She’s been hurting with that knee so long, I said, ‘Let’s go and get it done,’ ” Ed says. “People don’t believe in divine intervention, but that was it.”
“I let him have his way,” Nada says. Looking back, she’s glad she did.
When Nada heard the “code blue,” she felt like it was her husband. Ed developed heart problems in 1979, and is on his third pacemaker.
When Ann came back to her, Nada asked, “Is he dead?”
Ann did not immediately realize she was working on Ed.
Ed was sent to ICU, where he had another heart attack early the next morning. Again, he was resuscitated, then placed in a coma for several days. He also had a heart catheterization, which revealed a blockage in one artery, and he received a stent.
When he finally woke up, Nada said to him, “I see you’re back in the world of the living.”
Ed replied, “These women said I have died twice.”
Nada had to explain everything that had happened. Ed didn’t remember anything.
On the morning Nada was to have surgery, he says, “I wasn’t tired, I wasn’t dizzy, I wasn’t sleepy, I felt no pain. If that’s death, that’s the way to go. But I won’t go that way yet. I won’t press nothing.”
ggg

Ed never misses a chance to stop by and see the nurses who saved his life. He visits members of his church, Oakdale Baptist Church, in the nursing homes and in the hospital, so he’s around fairly often.
He just likes to stick his head in the door to say hello, and then he’s on his way.
The staff loves seeing him.
“It was such a rewarding experience for us,” Karen says.
“It was for me, too!” Ed says, grinning.
He and Nada took the surgical services nursing staff a basket of goodies at Christmastime.
“That’s such a little thing for such a big thing,” he says. “I saw one nurse who said, ‘I am glad to see you!’ She put a hug on me like you wouldn’t believe. I figured she was one of the ones who helped me.”
It worries him that he can’t thank each staff member personally. The hospital is trying to track down staff members who also helped him early the next morning. He wants to be sure and thank them, too. He doesn’t want to leave anyone out.
ggg

One person he did make a point to visit and thank was Dr. Doug Shellhorn. Doug is a family medicine physician at Rowan Diagnostic Clinic.
He was on duty as a hospitalist the morning Ed fell ill.
Faith Poole and Dequata Hollis are part of the outpatient center’s welcoming and registration staff. They called for a code blue.
“When there is a code blue, we respond as soon as we hear,” Doug says. “Everybody comes running.”
When Doug arrived on the scene, Ed was lying on the floor, receiving CPR. He was intubated and after the use of the defibrillator, his heart returned to a normal rhythm.
“As soon as we got him breathing, he was fine,” Doug says. “What a blessing it happened here. The sooner you can re-establish blood flow, the better off a patient is. Ed has done beautifully.”
Ed met with Doug at his office, just to thank him.
“So often, we don’t see patients in a follow-up experience,” Doug notes. “Ed is just a prince of a fellow. I can’t say I remember a patient coming back before. It was awesome. To see that someone is doing well tells us we are doing something right. Just seeing him healthy is what makes it special for all of us.
“It really is humbling. Those are the people you want to emulate.”
ggg

Just in case you’re wondering, Nada had her knee surgery in April 2013.
“It’s still hurting, but it’s tolerable,” she says. She says they’ll have to catch her to do surgery on her other knee. Meanwhile, she accompanies Ed on his visits from time to time, and goes to exercise class at her church twice a week.
Ed has become a celebrity of sorts around the hospital. People ask him a lot about his experience.
“Novant was a good place to be,” he says. “The Good Lord lined up everything.”
“You hear all the clichés but it’s true,” Ann says. “God put him in the right place at the right time.”
Ed is happy to be alive, of course, and happy he can continue making his visits.
“When somebody gives you a big smile and lets you know they appreciate you coming,” Ed says, “it gives you the blessing.”
But Ed continues to be a blessing to those people who saved his life.
“We’ll always remember you,” Karen tells him during a recent visit. “It’s such a good story with a good ending. We don’t always see that.”
Freelance writer Susan Shinn lives in Salisbury.

Drivers who use West Innes Street between Catawba College and the Crescent subdivision will need to plan for a little... read more