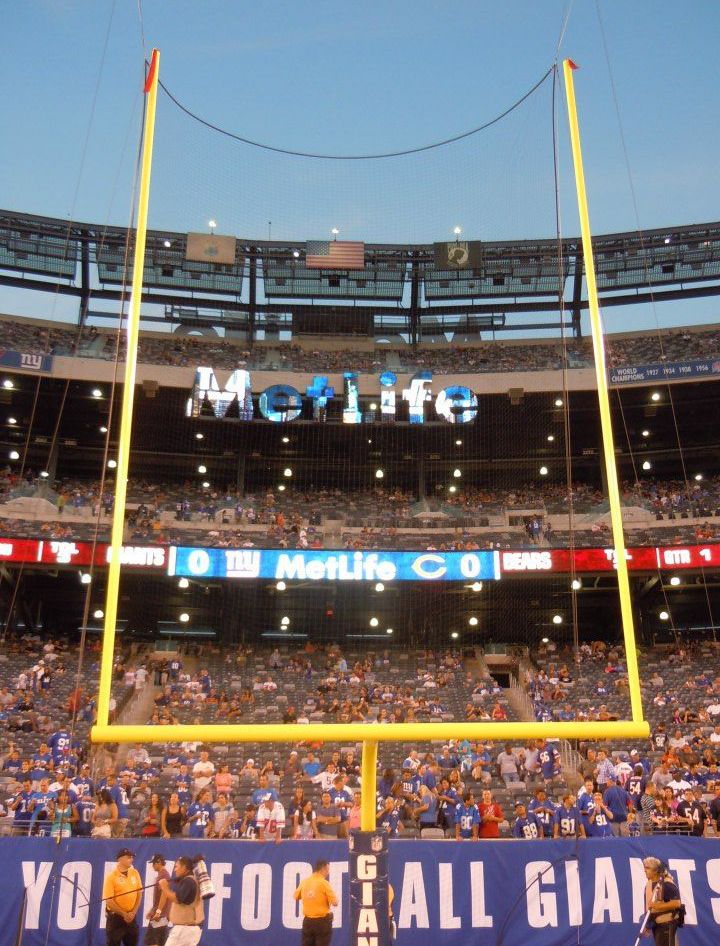 SALISBURY — Salisbury has Super Bowl connections.
If you watch the big game Sunday, you’ll see protective padding on the walls around the field at Met Life Stadium. That end zone padding came out of Promats’ manufacturing plant on Harrison Road, just like the stadium’s goal post padding.
And if you caught the Colbert Report on Tuesday night, you saw host Stephen Colbert and guest Hall of Fame wide receiver Cris Carter flanked by protective padding made by Fisher Athletic on Cauble Road as they discussed the upcoming showdown between the Denver Broncos and Seattle Seahawks.
“It’s exciting for our company to be recognized on a worldwide stage,” said Matt Cross, director of sales and operation for Promats. “We do a lot with local and state high schools and colleges, but when you get your products out there for the whole world to see it, it’s pretty amazing.”
Promats installed the custom padding in Met Life Stadium in 2012. Sister company Sportsfield Specialties in Delhi, N.Y., made the goal posts.
The padding that will protect the players is the best in the industry, Cross said.
“Our product is not the most economical, but we want it to provide the ultimate safety to players,” he said. “The last thing we want to see is a player run into a wall and get hurt.”
The Promats padding at the Super Bowl is more dense than most and passes specific impact standards to limit injuries, he said.
Promats, which employs 35 people in Salisbury and rang up between $6.5 million and $7 million in sales last year, pads seven National Football League stadiums and just won the contract to pad the new stadium for the San Francisco 49ers.
With the new Minnesota Vikings and Atlanta Falcons stadiums on the horizon, Promats will have about a quarter of the NFL market, Cross said.
Promats sends a team of employees to each stadium before manufacturing padding.
“No two end zone walls are the same,” Cross said. “We take custom measurements and come back and build the product for each specific case.”
Images of Promats’ padding have been broadcast across the globe from other stadiums during previous Super Bowls. They were all good advertising for the company, Cross said.
“When our projects perform at the highest level on the largest stage, we can go to other teams and say our projects lasted for the Super Bowl,” he said. “Word of mouth travels fast.”
Promats has a roughly 40 percent market share in Major League Baseball stadiums and recently developed an environmentally friendly padding that can be recycled rather than pitched in the landfill, Cross said. The Cleveland Indians have placed an order, he said.
Last year was the best ever for Promats, a company with a 30-year history, Cross said. The business has invested $350,000 in new equipment during the past two years, including a large format digital printer that can print on color vinyl.
Promats has been converting temporary workers to full-time employees with benefits and has one temp left to make the transition, Cross said.
“It’s important to us,” he said. “We think full-time Promats employees take more pride in their work.”
Hometown pride was on display during Tuesday’s Colbert Report on Comedy Central, when several red stand-up dummies decorated the set for Colbert’s interview with Carter.
Plant manager Gary Elmore said he didn’t know Fisher pads had made an appearance on the show until several fans told him. Fisher sporting equipment often makes cameo appearances in TV shows and movies and during high-profile games, Elmore said. Employees regularly spot the padding and gear they manufacture.
“We get so many requests for orders that we often don’t know where the end product is going,” he said.
Fisher, which has 55 employees in Salisbury and does about $8 million in annual sales, created special stand-up dummies for the movie “The Blind Side.” The movie versions were made with lightweight foam so the star could hoist one under each arm.
The company recently filled a special order, and employees wondered who in the Hamptons needed football gear. The Fisher equipment ended up appearing on the USA Network show “Necessary Roughness.”
Fisher has a distribution facility in Illinois with 12 employees, but about 80 percent of what the company produces is made in Salisbury, Elmore said.
Roughly 65 percent of the company’s annual sales are tied to football, followed by baseball and track and field. Collapsible stadium seats to use on bleachers have taken off, Elmore said.
Overall, sales were up last year, he said, and 2014 already is ahead of 2013.
“We’re proud of our products, and it’s nice to see them displayed in a national setting,” Elmore said. “It’s very satisfying.”