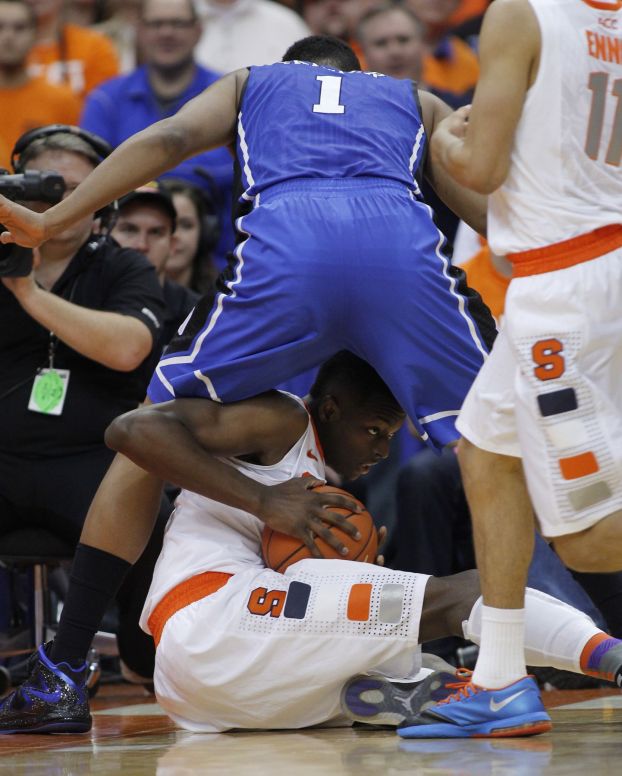 SYRACUSE, N.Y. — Coach K said he hoped this game would live up to its billing. It did, and then some.
Jerami Grant scored eight points in overtime to finish with a career-high 24 and Jim Boeheim’s No. 2 Syracuse stayed unbeaten, topping Mike Krzyzewski’s No. 17 Duke 91-89 on Saturday in a matchup of the two winningest coaches in Division I history.
The Orange withstood a tying 3-pointer in regulation and won before a Carrier Dome record crowd of 35,446.
“It was just a great game,” Boeheim said after career victory No. 941. “I don’t think I’ve ever been involved in a better game in here where both teams played at such a high level. Both teams just went after it. We’ve had a lot of games that have been here that are great. There’s never been one as good as this one.”
C.J. Fair scored a career-best 28 points as Syracuse (21-0, 8-0 Atlantic Coast Conference) set a school record for consecutive wins to start a season. The Orange remained one of three undefeated teams in the nation, along with No. 1 Arizona and No. 4 Wichita State.
“I knew for us to win I would have to contribute offensively,” said Fair, who shot 12 of 20. “I was able to not force things once I got going. I felt I was the hot hand and my teammates kept giving me the ball.”
Grant took over in the extra period, slamming home three dunks as Duke was forced to downsize after Jabari Parker and Amile Jefferson fouled out in the final two minutes of regulation.
“They were playing small. We knew we had a lot of mismatches around the court,” Grant said. “After I got the first dunk, they just kept feeding me.”
Duke’s Rasheed Sulaimon beat the buzzer in regulation with an off-balance 3-pointer that tied it at 78. The Blue Devils led 87-84 with 80 seconds left in overtime before Syracuse rallied.
“Both teams played with so much heart,” Krzyzewski said. “We were scrambling a lot because of our foul trouble and our kids scrambled well. They scrambled well enough to put us in a position to win … Just a tough loss.”
Syracuse students camped out in the bitter cold for nearly two weeks and were part of a crowd that was charged up from the start for the first ACC meeting between these longtime powers. It was Duke’s first game against the Orange in the Carrier Dome.
Parker had 15 points and nine rebounds for Duke (17-5, 6-3). The Blue Devils, who had won five in a row, get their chance to avenge the loss in three weeks when the teams meet again at Cameron Indoor Stadium.
“We just needed one more play, whether it was a rebound or a shot going in,” said Andre Dawkins, who scored five points in overtime before fouling out in the final minute. “We just needed one play.”
From the moment Boeheim and Krzyzewski walked onto Jim Boeheim Court to a deafening roar and hugged at midcourt surrounded by a sea of orange, the atmosphere was electric. Singing and acting star Vanessa Williams, a Syracuse alum and former Miss America, performed the national anthem.
The game was chock full of story lines, well before the tipoff.
Two Hall of Fame coaches and good friends with a combined 1,914 wins who had only met twice before on opposing benches, each winning once. Boeheim’s signature 2-3 zone defense vs. Krzyzewski’s intense man-to-man.
Fair, Syracuse’s leading scorer, vs. Dawkins, a fifth-year senior who leads the ACC in 3-point shooting. Parker vs. Syracuse point guard Tyler Ennis, two of the most accomplished freshmen in the country.
The game was tied at 78 after regulation, and there were two more ties in the extra session. Grant had three straight slams for the Orange, while Dawkins hit a follow and a 3 from the top of the key as Duke took a three-point lead with 1:20 left.