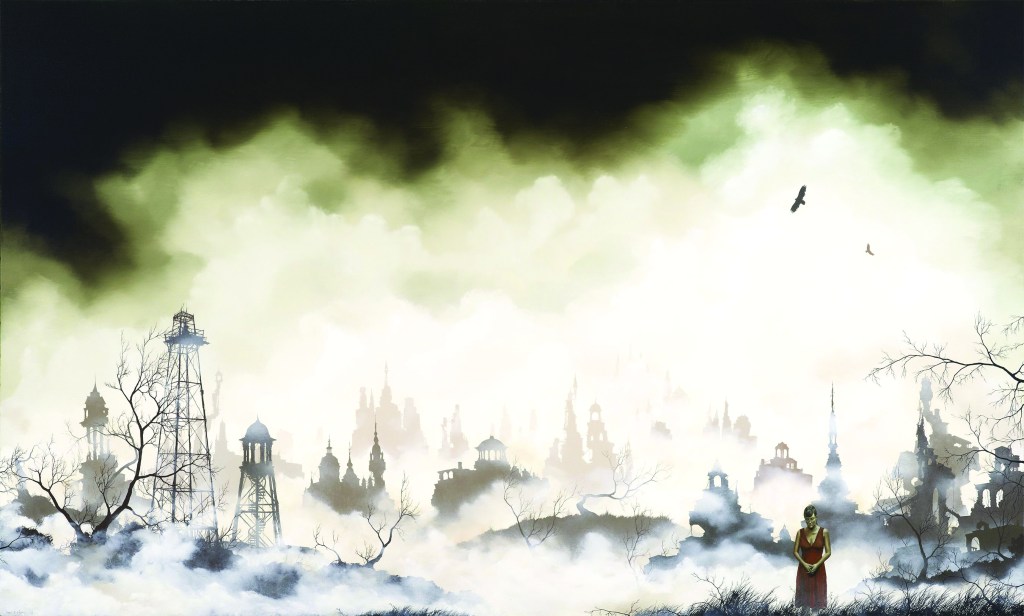 Three artists investigate the relationship of the human condition and its effects on the environment. Each work expresses the subject in the context of human values, contemporary culture and events of a specific space, both physical and psychological.
The exhibition takes a fresh look at conventional representations of nature to push boundaries and offer interesting ways to evoke emotional responses. The art may seem whimsical, colorful, or challenging, yet each elicits contemplation and empathy toward the artist’s view. Texture, color, and value contrast express personal statements about the human condition.

Ken Hoffman of Peoria, Ill., uses a surreal approach to the human form in his exhibition, Animals Great and Small.
“For the past 20 years, the anthropomorphic subject matter of my animal portrait paintings has been the centra focus of my artistic endeavors. My main objective has been to pursue this vigorous and quasi-surreal approach to the human head. It is my intention to convey to the viewer animal-people expressions and to show how close humans are to animal counterparts. The impact of the imagery parallels certain kinds of modern literature such as ‘Animal Farm,’ ‘Metamorphosis’ and ‘Waiting for Godot.’”
Hoffman uses a complex method of coloration and a buildup of oil paint as part of an elaborate method to achieve surface texture, as well as experimenting with the use of new materials including sand, glitter and acrylic paint.
Hoffman is professor of art emeritus at Bradley University in Peoria, Ill. He earned his BFA and MFA at the San Francisco Art Institute. His work has been exhibited nationally and is held in such public collections as the Rockford Art Museum in Rockford, Ill.; the Lakeview Museum in Peoria; and private collections including the Administrative Director of the Museum of Contemporary Art, Chicago; and the President of the Chicago International Art Expo. He has also shown his work internationally in Paris, Poland, Germany, Australia, Ireland, and Argentina.
Known for darker, chaotic landscapes, Brian Mashburn of Asheville paints a series of work, titled “Maisma,” that centers on the unrestrained sprawl of cities, pollution of industry, and urban over-population. His scenes would seem to be from a post-apocalyptic world where nature, culture, and industry are engaged in conflict.
“I am interested in the interaction between man and nature. Cause, effect and the accumulation of actions are explored in my work. My paintings are observations, not prophecy. My paintings are, in large part, inspired by the landscapes I see everyday in the South as well as those I encountered in China a few years back. In these landscapes, the viewer can find narrative as well as social and environmental commentary. I am drawn to the juxtaposition of hard lines and soft forms. A bare tree branch in front of a cloud creates an exquisite drama, one which I endeavor to represent on canvas. The growth of cities, industry, and urban populations has entered a state of perpetual velocity, with untold implications for both natural and social geographies.”
With a delicate touch, he creates complex but exquisitely rendered spaces where trees, clouds, buildings and solemn figures are incorporated into a maze of remnants from the Industrial Age. Mashburn paints in oils, applying the paint in thin layers. He often works on several canvases at once. Details are painstakingly rendered and often covered up by subsequent layering.
He graduated from UNC Chapel Hill with a BFA in painting and drawing and has shown his work across the United States.

The work of contemporary artist Kevin Palme of Asheville is an ongoing study derived from his interest in places, landscapes, and the abstraction of memories.
Born and raised in New Jersey, Palme’s time spent traveling throughout the country has had a dramatic impact on his work and philosophy about making art. His recent series, “On the Precipice,” are visual meditations on memories of times and places undergoing transitions. At times depicting a dramatic change and at times a subtle shift, the works in this series offer abstractions of moments leading up to or immediately following a profound metamorphosis. Viewers are invited to create personal narratives of the works based on individual experiences.
“We are surrounded by impermanence,” Kevin says. “Fleeting moments, shifting perspectives, and change all illuminate the fact that nothing in life is permanent. Daily and seasonal transitions, birth, growth, and death all remind us of the inevitability of impermanence. Even the most seemingly eternal landscapes will eventually succumb to time. We are left with memories. Abstract and residual, our memories are a means by which we can honor the past and recall experiences, relationships, and parts of our histories.”
Palme received his BA in studio art from Wake Forest University and his MFA in painting from Savannah College of Art and Design. His work has been nationally exhibited and is held in public collections including the Creative Arts Guild, Dalton, Ga.; Mohawk Industries, Dalton, Ga.; Parsec Financial Management, Asheville; and Savannah College of Art and Design, Savannah, Ga. His works are also held in private collections nationally.