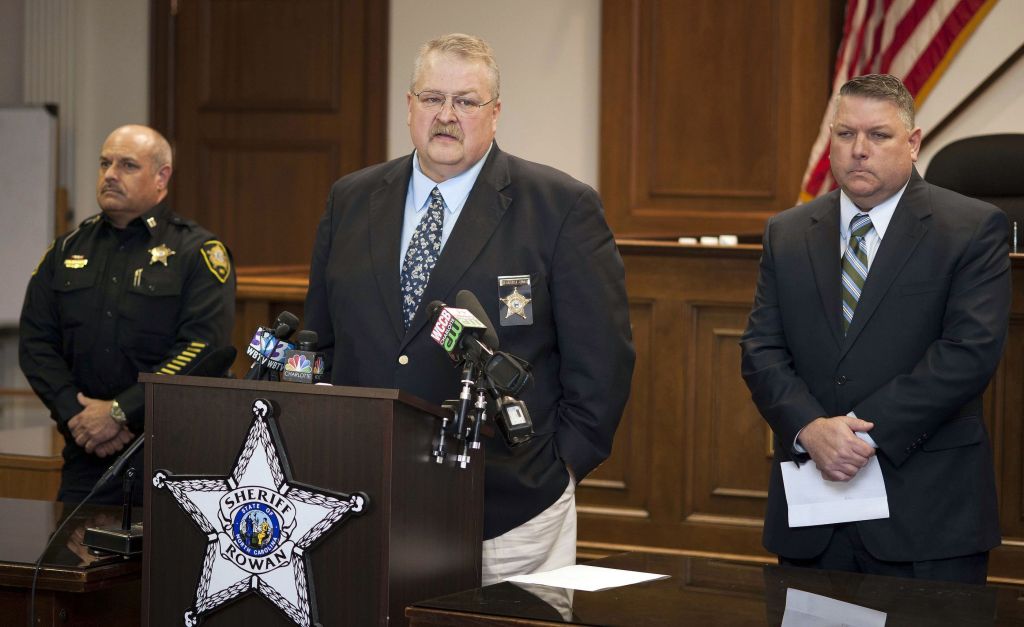 SALISBURY — Six months after teenager Erica Parsons was reported missing by her adoptive brother, authorities are offering an additional $25,000 reward for information that helps them find her.
Deron Roberts, the FBI’s assistant special agent in charge, said during a press conference Thursday the agency is now offering a $25,000 reward in addition to the $10,000 already offered by the Rowan County Sheriff’s Office.
Erica, 15, was reported missing July 30 by her adoptive brother, James “Jamie” Parsons. Her adoptive parents, Casey and Sandy Parsons, maintain they let Erica travel to Asheville to live with her biological grandmother Irene Goodman. The couple say Erica visited Goodman, whom they knew as “Nan,” three times before they allowed her to live with the woman.
Roberts repeated what local law enforcement officials have said: Goodman does not exist.
“We know that Erica did not go to live with Irene Goodman, which had previously been reported. I can tell you Nan just does not exist,” Roberts said.
Sheriff Kevin Auten said investigators need information.
“It is clear that Casey and Sandy Parsons have not been truthful and provided the information that would lead to the whereabouts to find Erica,” Auten said. “We know that there’s someone out there who can help us, and now’s the time to come forward.”
Auten said investigators would also like to hear from anyone who dealt with the Parsons family in November of 2011, the last time Erica was seen. Jamie Parsons told investigators he had not seen his sister since Nov. 19, 2011.
Officials released an updated flyer about Erica, including a photo of her from 2011 and the age progression photo created in 2013 by the National Center for Missing and Exploited Children. The new flyer also includes a few details of the investigation — when the teen was last seen and where she was said to have gone.
Auten implored family, friends, medical providers, store employees — anyone who may have seen Erica or had any interaction with the Parsons family who “could provide clues we need to locate her,” he said.
“No one wants to find her more than the law enforcement agencies you see here represented today,” the sheriff said.
He said there’s been a lot of speculation about the investigation and some media outlets had reported investigators found human remains during a search.
“That is simply false. Rumors and speculation at this time will not help us find Erica,” he said.
Officials allowed no questions following the announcement, citing the nature of the ongoing investigation.
A reporter asked Auten if he would clarify his comments regarding human remains. He did not.
Investigators returned a search warrant in December to the Rowan Clerk of Court regarding two separate searches that took place in November of a storage building on the property of Sandy Parsons’ father, William Parsons. The warrant said a cadaver dog alerted on the “possible presence of human remains.”
He said investigators have provided information to media outlets from the beginning of the investigation that they believed would help them find Erica.
“We truly appreciate the outpouring of community support. We are also very appreciative of the response we’ve gotten from the media by putting her pictures out there and keeping Erica’s disappearance in the public eye,” Auten said.
Casey Parsons told a Post reporter she’s thrilled the reward has been increased.
“Maybe this will be the thing that will make someone come forward. We have done everything they’ve asked us to do. They have not contacted us in months. I don’t know how we were not cooperating,” she said.
“I think they are trying to keep the word out, which is excellent,” Casey said.
Casey said she and her husband were asked in November to do a composite of Irene Goodman, which she said they were willing to do, but no one has ever contacted them again about it.
She said she and her husband found out when the whole world did that Erica was missing and that there was no Irene Goodman.
“We felt horrible. We are not lying. We are telling the truth,” she said.
Investigators have said the couple have not provided credible information throughout this case.
As to the storage building, Casey said, she and her husband had not been there in three years.
She said it’s upsetting to think Erica could be held somewhere against her will. Instead, Casey said she and her husband think Erica doesn’t want to return home.
Anyone with information on the whereabouts of Erica Lynn Parsons is to call the Rowan County Sheriffs Office at 704-216-8700 or the FBI Charlotte Office at 704-672-6100.
People can also contact the nearest American Embassy or Consulate, or submit a tip on the FBI’s website https://fbi.tips.gov