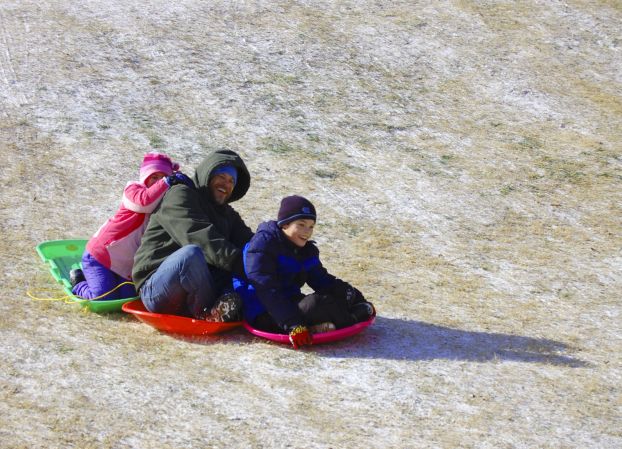 Winter weather is fun for some, headache for others

When early morning temperatures dipped to the low teens and little traffic was on the roads, some Rowan County children took to the hills, literally.

It was a snow day for students after Rowan-Salisbury School officials decided Tuesday night the roads would be too dangerous to travel Wednesday morning.

The Rowan-Salisbury School System canceled classes and after-school activities for students and 10-month staff again today. All other staff will operate on an hour delay.

Kannapolis City Schools will also be closed for students. However, staff will have an optional work day.

Snow blanketed roads and cars, and although there was just a little powder in some areas to play in, children across the county headed outside to enjoy whatever was there before it melted.

The crowd that gathered at Centennial Park in Salisbury’s Fulton Heights neighborhood was no exception. Children and some fun-loving parents took to the hill at the edge of the park with saucers, sleds, snowboards and even a bodyboard, typically used to ride waves at the beach.

Devon Mitchell, a sixth-grader at North Hills Christian School said the favorite part of his day off was sledding and crashing.

“It only comes around once a year. You have to make the best of it,” he said.

Salisbury Academy second-grader Eva Carter said she loved the snow and the day off school. “When I woke up, I put on my snow clothes and came out,” she said.

Parents bundled their children up in coats, hats, scarves and gloves before letting them play outside.

“My mommy and daddy put three layers on me,” exclaimed Nicholas Eppehimer, a preschooler who attends school at First United Methodist, as he showed off his turtleneck, sweater and coat.

As temperatures rose above freezing and children played hard, many began shedding their layers.

Cross was especially excited to miss a day of school.

“I’ll miss a field trip,” he said, but added that it was OK because he didn’t really want to go to the symphony.

The Rowan-Salisbury School System originally set a make-up day for Saturday, but later changed it to Friday, Feb. 14.

Grace Eppehimer, who is a second-grader at Koontz Elementary was relieved that the make-up day was changed.

“The weekends are supposed to always be at home,” she said.

Meteorologists with the National Weather Service in Greenville, S.C., say the low was 16 in Salisbury around 8 a.m. on Wednesday, but it rose to a high of 26 between 4 p.m. and 4:30 p.m.

The temperature reached as low as 10 degrees in Salisbury on Wednesday night and is expected to be above the freezing mark in the mid-to-upper 30s today.

“Temperatures will probably stay close to freezing close to noon when the high is expected to be 36,” said Meteorologist Harry Geratetritis.

Geratetritis said it will continue to warm on Friday and the conditions will be dry. The temperature will be in the low 50s by the afternoon.

“It will be the beginning of the warming trend,” he said.

The temperature on Saturday will reach 56 degrees and 57 on Sunday. There will be a cold front coming in Saturday night to Sunday, he said.

In a 26-hour period, beginning around 3 a.m. Tuesday and ending Wednesday afternoon just before 5 p.m., Rowan County 911 Communications reported 61 accidents that included property damage and 21 accidents that resulted in someone being injured.

Capt. Shelia Lingle urged drivers to slow down and take time to navigate the roadway. She also advised motorists to not “slam” on their brakes when driving. Lingle also said drivers should keep a safe distance from the vehicle in front of them in the event the driver stops suddenly.