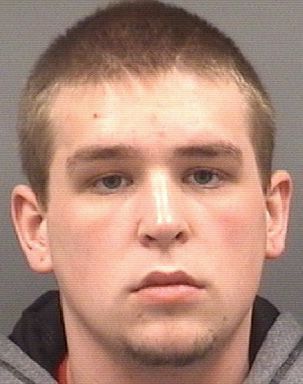 Authorities charged a Salisbury man after they say he engaged in an inappropriate sexual relationship with two 15-year-old girls. The relationship was discovered during a traffic stop.
The Rowan County Sheriff’s Office charged David James Garland, 21, of the 400 block of Union Heights Boulevard, with two counts indecent liberties with children, four counts statutory rape, two counts sexual exploitation/permit minor to engage in sex and one count dissemination to minors under the age of 16, all of which are felonies.
Officials say the victims met Garland through social networking site Facebook, and began a relationship. The Rowan County Sheriff’s Office became aware of the crimes, a statement said, after Deputy Jagger Naves, who is a member of the Aggressive Criminal Enforcement Team (ACE) made a traffic stop of David Garland on Jan. 6.
Deputy Naves seized a small amount of marijuana and drug paraphernalia from Garland and became suspicious after determining Garland’s passenger was a 15-year-old girl. Naves obtained permission to check Garland’s cell phone for possible drug information, but instead found disturbing pictures and texts involving underage females, a report said.
Garland was asked to show up at the Sheriff’s Office for an interview with Detective Sara Benfield, who then initiated an investigation that resulted in the above charges.
Garland remains in the Rowan County Detention Center under a $75,000 secured bond.