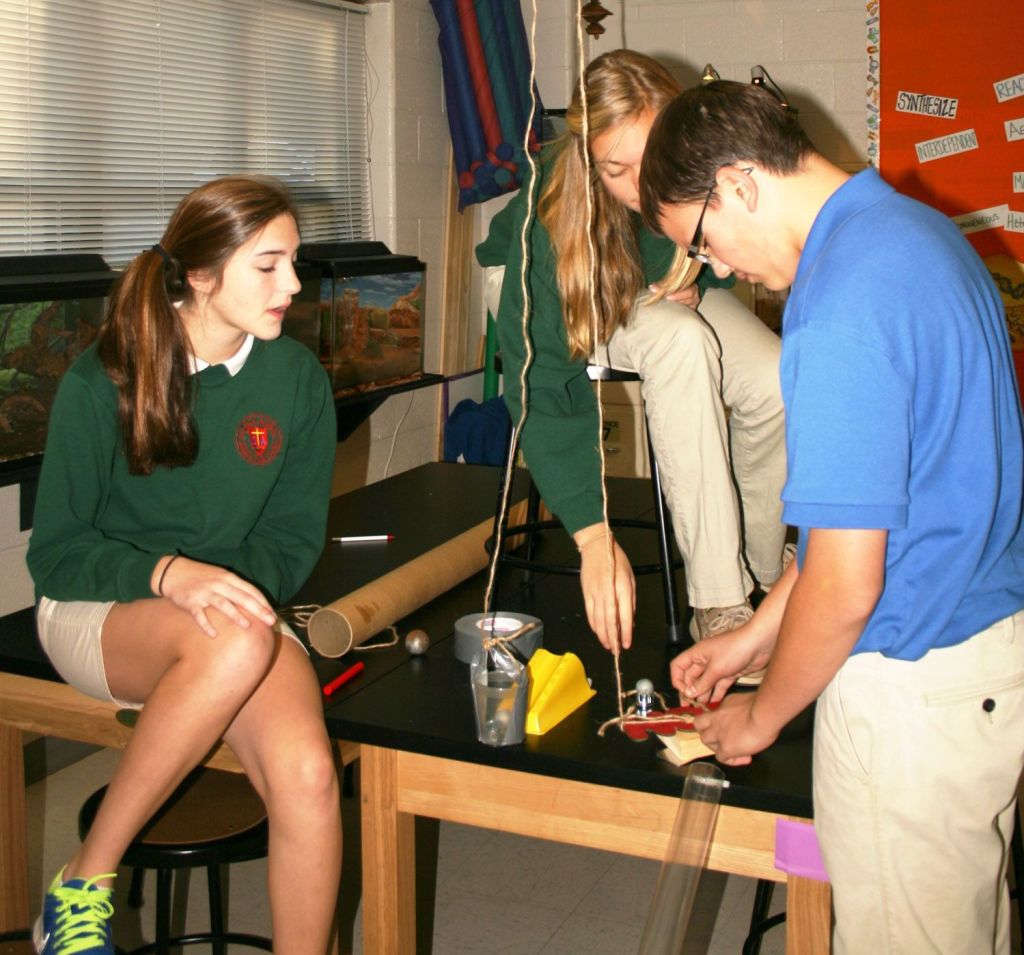 Middle school students sometimes complicate things, which can come in handy during physics class.
Eighth-grade students at Salisbury Academy recently studied force and motion and simple machines as part of their physics class. Teacher Katie Reefe challenged the students to build a contraption that watered a plant using several Rube Goldberg machines. Goldberg was a Pulitzer Prize-winning cartoonist, sculptor and author who was best known for his inventions that were complex.
Reefe said during this unit, students not only learned the concepts of the lesson, but also were able to put problem-solving skills into action. “When you can practice solving authentic problems, real world problems seem less intimidating,” Reefe said. “In a world where machines are taking over all the simple tasks, we need to produce a work force that is comfortable problem-solving and collaborating. This is the type of experience students have every day at Salisbury Academy.”
During the unit, students participated in several mini lessons on the concepts of force and motion and the study of the six simple machines. These lessons included short lectures with independent reading and small group discussion. Once students became familiar with the content, they divided into six groups and prepared and presented their own lessons to the class on each machine, including lecture, reading, demonstration and a question and answer session. “Students learn best by teaching. It is a higher order of thinking to have to explain material to an audience. They have to fully understand a concept to be able to explain it to someone else,” Reefe said. “We value the ability to present in front of an audience as a 21st century skill of communication in the work place.”
“The presentations really deepened our understanding,” said student Ivy Overcash.
After the presentations were complete, students were tasked with building a contraption that would water a plant, with the rules that it had to start with the dropping of a ball and had to include at least three simple machines.
“This project was neat because we could just create anything,” said student Drew Shelby. “We got to choose how it worked, and it was fun to over complicate stuff. It didn’t get boring because we got to be creative and try new ideas.”
“The more time we had, the more things we added in to complicate the process,” said Overcash. Students used a wide variety of materials including marbles, steel balls, rope, pulleys, wheels, axles and even a Brita water filter system.
Reefe said watching the students work on this project was the most rewarding part. “There were moments where I realized they were putting the concepts into action; they understood the material on a deep level and were putting problem-solving skills into action,” she said. “It all comes down to experience. Sometimes you have to play with something to understand it.”
“Learning this way means you actually get to be a part of the learning process, which makes it fun and easier to learn,” said student Anna Louise Lewis.