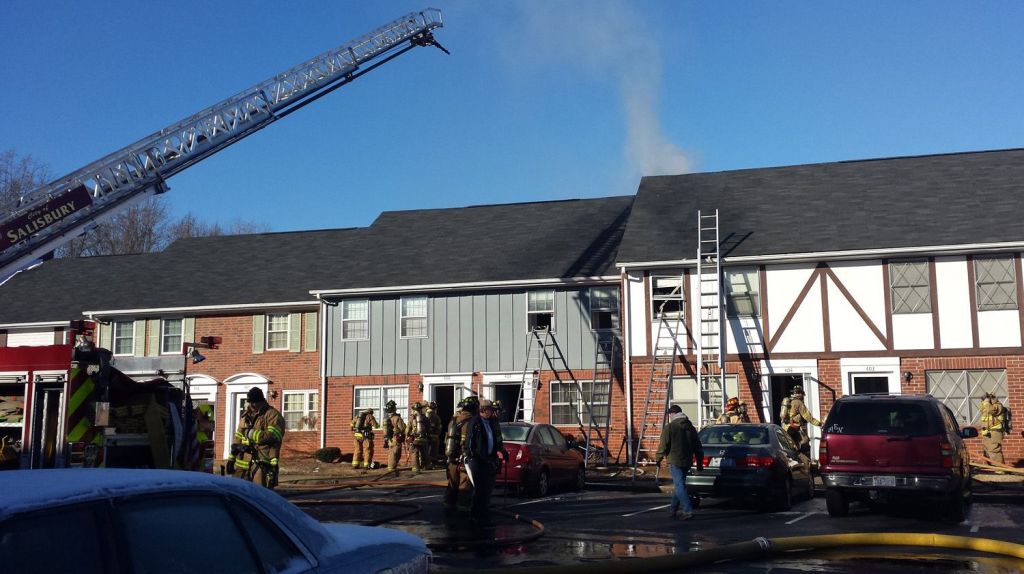 Tami Beaver was home early Thursday morning when she saw flames coming from her kitchen cabinet at her Wiltshire Village apartment, 1300 Larchmont Place in Salisbury. The fire began shortly before 9 a.m. at the complex, located just off East Colonial Drive.

A second alarm was called out for a structure fire at Wiltshire Village .

At first, one apartment was involved; three other apartments appeared to be affected. The fire spread to the attic of the apartment building. The second alarm included a call for additional personnel. Firefighters were working in bitter cold as the temperature was 4 degrees.

Beaver and her husband, Dennis, were both standing outside as firefighters worked to contain the fire. The couple say they’ve lived in the apartment for more than 10 years. Their smoke and fire spread to three other apartments beside them. Firefighters could be seen going in and out of the apartments that flanked the Beavers’. Firefighters had to break the door of one apartment to gain entry.

The weather was so cold the water from the hoses began to ice over and fire crews placed a cat litter-like substance onto the frozen water.

Dorvail Cue said he was watching television when one of his neighbors knocked on his door to tell him to evacuate. He said they told him the fire was a couple doors down, but was spreading.

He just moved into the neighborhood and hasn’t gotten the chance to meet all of his neighbors, but says he’s grateful they let him know about the fire.