Wineka column: After 50 years, Milford Hills Methodist’s barbecue is like an old friend 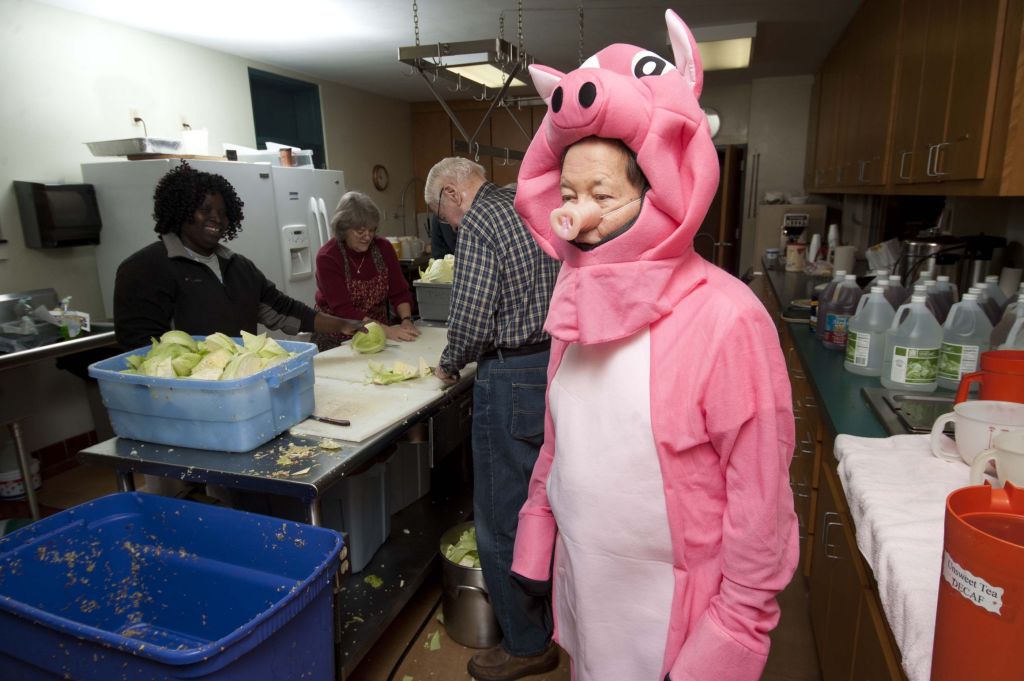 The men worked fast, with their chain saws and splitters. Within two hours they had three cords of wood — two trailer loads of oak and hickory that will fuel the fires for the church’s 50th annual “Bar-B-Que” Friday.

That’s right — 50th. And you thought only the Beatles were old.

The annual barbecue is a major production, involving most members of Milford Hills Methodist. The preparation starts early — from the wood-cutting, to the ordering of supplies, to the selling of tickets.

Like an expected visit from an old friend, the event always comes to fruition the last Friday in January, and that often happens to be the Friday before the Super Bowl.

The church prepares between 1,800 and 2,000 dinners for people who dine in at the fellowship hall for lunch or supper, come by for takeout or have it delivered free to their places of business.

The takeout/delivery side of the barbecue is actually the most popular. Last year, carry-outs and deliveries accounted for 1,418 dinners by themselves.

Judy Yeater said 10 drivers will be fanning out across the city Friday to locations where there are five or more orders.

An additional 20 church members form an assembly line of people packing meals for takeout and delivery. “We do get busy,” Yeater said.

Kirkpatrick is a wily veteran of many of these barbecues. He has worked each one since the mid 1970s. “It takes a lot of people,” he said.

The key to seeing it work, Kirkpatrick added, is repetition. By now, the congregation knows what has to happen and when, and experience gives the organizers — Paul Hoben and Rob Beecham coordinate a lot of things — a good grasp of how much food, drink and paper products they need.

“Fifty years, you kind of get it down, don’t you, Willie?” Joyce Powel said Tuesday.

Every day leading up to the barbecue seems to hold a task. Monday, tables were set up, and the outside tent for takeouts was erected between Brandon Street and a side door of the fellowship hall.

Tuesday was dedicated to making slaw. The fellowship hall’s kitchen was full of people slicing and grinding cabbage — more than 600 pounds — and mixing in the key ingredients of warm water, vinegar, pepper, salt, tomatoes and sugar.

“We’re be smelling like vinegar, sugar and pepper for days,” said Jane Cooper. She and Sarah Presson were elbow-deep in their mixing of the slaw and filling big plastic containers.

Wednesday will be the barbecue sauce or dip-making day. The church relies on time-tested slaw and dip recipes, handed down from church member Margaret Wansley of Wink’s Barbecue fame.

Back at the church, Thursday is bread-packing day, but the men also take to the barbecue pits Thursday morning.

They will do two cooks — 147 pork shoulders in all — over 24 hours. Four guys spend the whole night, tending to the meat.

“You have to stay with it,” Kirkpatrick said.

Kirkpatrick will be working takeouts Friday and before that, making sure the wood for the pits is dry. But the wood shouldn’t be too dry, or it won’t make good coals, Kirkpatrick explained.

For many years now, the church has cooked its shoulders in pits along N.C. 150, near the Locke Fire Department substation.

“There’s a lot of comments and a lot of fellowship going on at the pits,” Kirkpatrick said.

“It’s a lot of work, but a lot of fellowship takes place, too.”

Bob Hundley serves as one of the chief cooks. Daryl Presson, who was a teenager at the first barbecue 50 years ago, says the meat is pulled off the bone before going through a breakdown machine, with some chopping by hand to follow.

The meat is kept warm and fresh in stainless steel boxes Kirkpatrick made years ago.

Women of the church make 175 to 200 cakes for dessert, and there’s a separate cake-packing room set aside in the fellowship hall. Many of the cake-baking assignments are handed out in women’s circle groups.

Church members sell tickets for the barbecue, but dinner also can be purchased the day of the event.

Some years back, someone had the bright idea to cover the kitchen floor in the fellowship hall with plastic and cardboard.

When all the food preparation is over, this temporary floor covering is rolled up and thrown away, leaving a clean floor in its wake.

People who swing by Milford Hills Methodist Friday have a good chance of seeing Danny Cooper.

Danny usually serves as the church Easter bunny and Santa Claus. Friday he will be wearing a new pig costume in honor of this 50th barbecue.