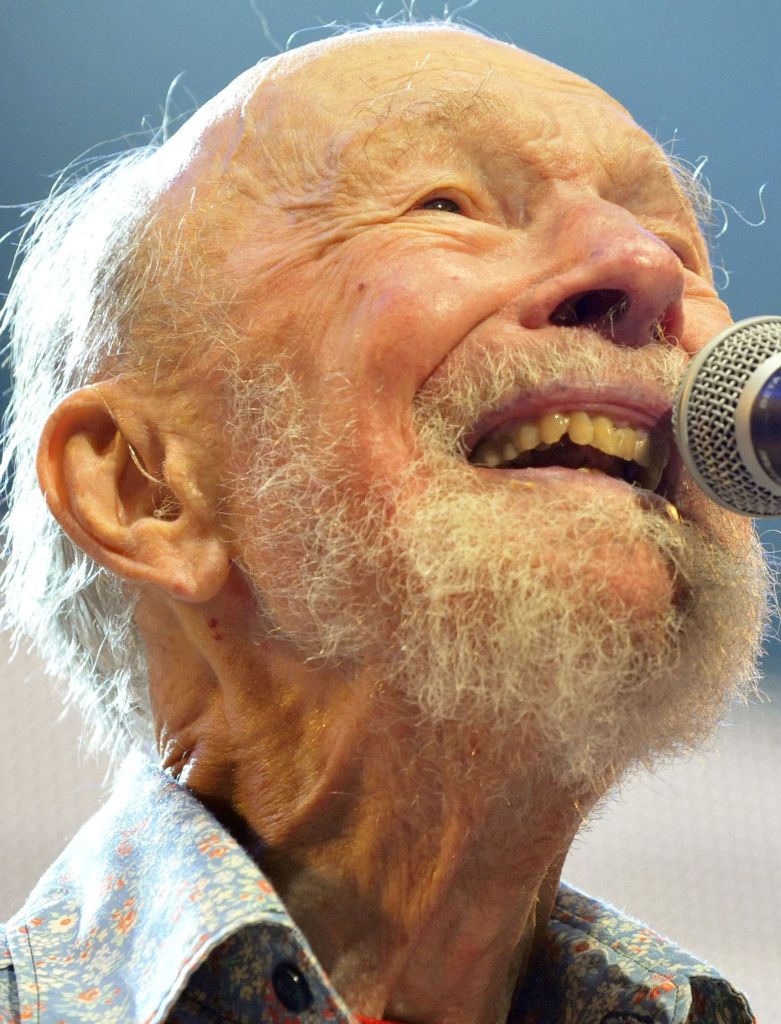 ALBANY, N.Y. (AP) — Unable to carry his beloved banjo, Pete Seeger used a different but equally formidable instrument, his mere presence, to instruct yet another generation of young people how to effect change through song and determination two years ago.
A surging crowd, two canes and seven decades as a history-sifting singer and rabble-rouser buoyed him as he led an Occupy Wall Street protest through Manhattan in 2011.
“Be wary of great leaders,” he told The Associated Press two days after the march. “Hope that there are many, many small leaders.”
The banjo-picking troubadour who sang for migrant workers, college students and star-struck presidents in a career that introduced generations of Americans to their folk music heritage died Monday at age 94. Seeger’s grandson, Kitama Cahill-Jackson, said his grandfather died peacefully in his sleep around 9:30 p.m. at New York-Presbyterian Hospital, where he had been for six days. Family members were with him.
“He was chopping wood 10 days ago,” Cahill-Jackson recalled.
With his lanky frame, use-worn banjo and full white beard, Seeger was an iconic figure in folk music who outlived his peers. He performed with the great minstrel Woody Guthrie in his younger days and wrote or co-wrote “If I Had a Hammer,” “Turn, Turn, Turn,” “Where Have All the Flowers Gone” and “Kisses Sweeter Than Wine.” He lent his voice against Hitler and nuclear power. A cheerful warrior, he typically delivered his broadsides with an affable air and his fingers poised over the strings of his banjo.
In 2011, he walked nearly 2 miles with hundreds of protesters swirling around him holding signs and guitars, later admitting the attention embarrassed him. But with a simple gesture — extending his friendship — Seeger gave the protesters and even their opponents a moment of brotherhood the short-lived Occupy movement sorely needed.
When a policeman approached, Tao Rodriguez-Seeger said at the time he feared his grandfather would be hassled.
“He reached out and shook my hand and said, ‘Thank you, thank you, this is beautiful,”’ Rodriguez-Seeger said. “That really did it for me. The cops recognized what we were about. They wanted to help our march. They actually wanted to protect our march because they saw something beautiful. It’s very hard to be anti-something beautiful.”
That was a message Seeger spread his entire life.