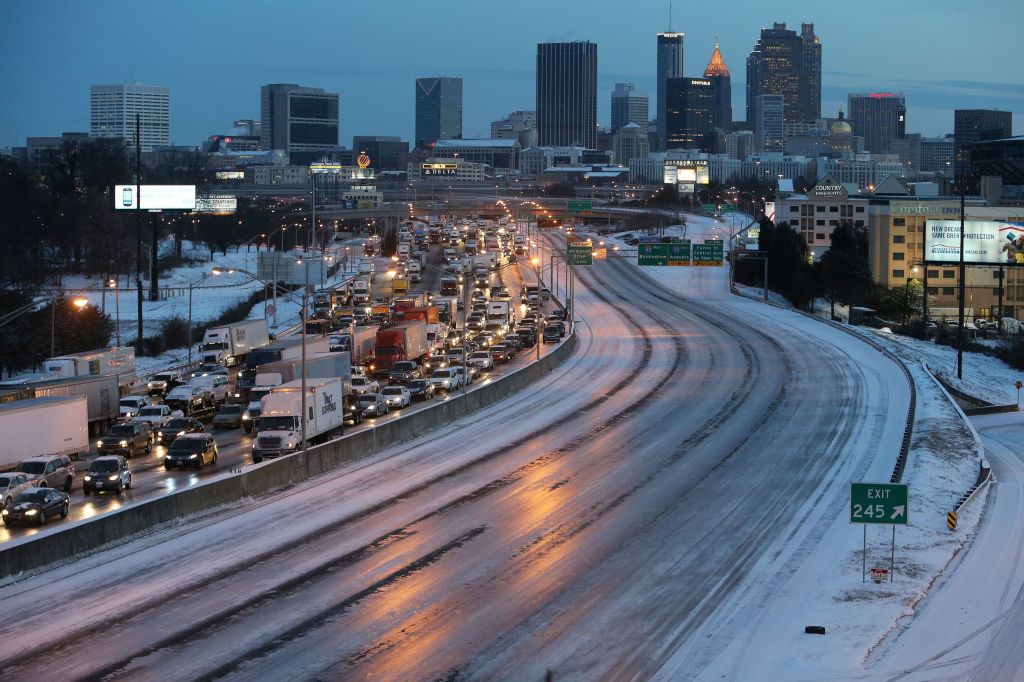 ATLANTA (AP) — Students spent the night on buses or at schools, commuters abandoned their cars or idled in them all night and the highways-turned-parking lots iced over when a winter storm slammed the city, creating a treacherous traffic jam that lasted into Wednesday.
It wasn’t clear exactly how many people were still stranded on the roads, a day after the storm hit the Deep South on Tuesday, paralyzing the region. And the timing of when things would clear and the highways would thaw was also uncertain because temperatures were not expected to be above freezing for very long.
Authorities worked to get food, water, gas and blankets to people still stranded in their cars and National Guard vehicles and police were to escort home the thousands of children who were still at schools. Hundreds of children spent the night on school buses, officials said.
The rare snowstorm deposited mere inches of snow, but the South saw fatal crashes and more than 1,000 fender-benders. At least six people died in traffic accidents, including five in Alabama, and four people who were killed early Tuesday in a Mississippi mobile home fire blamed on a faulty space heater.
In Atlanta and Birmingham, highways were clogged by jackknifed 18-wheelers. Ice shut down bridges on Florida’s panhandle and the Lake Pontchartrain Causeway, one of the world’s longest spans, in Louisiana. Some commuters pleaded for help via cellphones while still holed up in their cars, while others trudged miles home, abandoning their vehicles outright.
Linda Moore spent 12 hours stuck in her car on Interstate 65 south of Birmingham before a firefighter used a ladder to help her cross the median wall and a shuttle bus took her to a hotel where about 20 other stranded motorists spent the night in a conference room.
“I boohooed a lot,” she said. “It was traumatic. I’m just glad I didn’t have to stay on that Interstate all night, but there are still people out there.”
Some employers such as Blue Cross Blue Shield in Alabama had hundreds of people sleeping in offices overnight. Workers watched movies on their laptops, and office cafeterias gave away food.
Alabama Gov. Robert Bentley’s office said rescue personnel and medics in state aircraft were flying over Jefferson and Shelby counties conducting search and rescue missions for stranded motorists.
On the coast, snow covered grass and sidewalks in Orange Beach. Ice-covered roads forced mass closings even in Mobile, where ice coated ornate iron balconies.
Atlanta, hub to major corporations and the world’s busiest airport, once again found itself unprepared to deal with the chaos — despite assurances that city officials had learned their lessons from a 2011 ice storm that brought the city to its knees. Some residents were outraged that more precautions weren’t taken this time around and schools and other facilities weren’t closed ahead of time. But officials from schools and that state said weather forecasts indicated the area would not see more than a dusting of snow and that it didn’t become clear until late Tuesday morning that those were wrong.
Still, Georgia leaders were aware of public angst and tried to mitigate it.
Atlanta Mayor Kasim Reed took some of the blame for schools, businesses and government all letting out at the same time, and he said they should have staggered their closings.
“I’m not thinking about a grade right now,” Reed said when asked about the city’s response. “I’m thinking about getting people out of their cars.”
Georgia Gov. Nathan Deal said the National Guard was sending military Humvees onto Atlanta’s snarled freeways to try to move stranded school buses and get food and water to people. Georgia State Patrol troopers headed to schools where children were hunkered down, and transportation crews continued to treat roads and bring gas to motorists, Deal said.
If there was a bright spot in the epic gridlock, it was the Southern-style graciousness. Strangers opened up their homes, volunteers served coffee and snacks to the traffic-bound, and schoolbound principals played bingo and other games with stranded students to while away the time.
Debbie Hartwig, a waitress at an Atlanta-area Waffle House, said she managed to keep her cool thanks in part to the kindness of strangers after 10 hours on the road.
“I’m calm,” she said. “That’s all you can be. People are helping each other out, people are moving cars that have spun out or had become disabled. It’s been really nice. I even saw people passing out hot coffee and granola bars.”
At the non-denominational Action Church in Canton, Ga., church members kept the lights on for stranded motorists. Tommy Simmons, a church member, said the church parking lot was filling overnight with cars of stranded motorists.
“I’ve got 12 to 18 people right now. They’re getting warmed up,” Simmons said. His guests included a family that got stuck in the Atlanta area en route to Texas, several motorists, and two homeless men.
“Everyone is sitting around chitchatting like they’ve known each other for years,” he said. And in true Southern style, the guests were served pork barbecue.
Heroes also had their day. Police in suburban Atlanta say one of their own helped assist the safe delivery of a baby girl on a gridlocked interstate Tuesday afternoon after snow and ice brought traffic to a crawl.
Sandy Springs Police Capt. Steve Rose said an officer arrived with only minutes to spare before the infant arrived.
“Fortunately he had his emergency lights on and people got out of his way,” Rose said. “The delivery was pretty flawless.”
Meanwhile, people took to social media such as Facebook to appeal for overnight shelter — or to offer guest rooms, fire stations, churches and park gymnasiums to those needing a warm place to stay after spending hours in their cars. People on one page, SnowedOutAtlanta, offered guest bedrooms, fire stations, shelters and just about any other warm building to stay. Even a supermarket offered lodging.