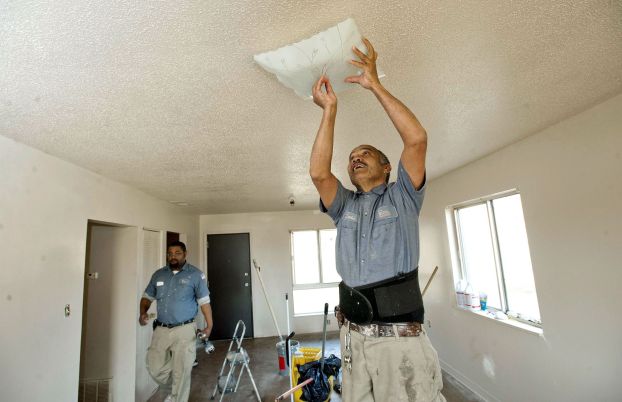 SALISBURY — As part of a change that would allow the Salisbury Housing Authority to borrow money for the first time, every public housing apartment in the city could see a makeover, including new kitchens and bathrooms.
Initial upgrades would take place during a two-year period starting this summer, said Sam Foust, executive director for the housing authority. Nearly all of the authority’s 545 units would each undergo a roughly $22,000 makeover with improvements like new floors, counter tops, appliances, heating, air and plumbing, Foust said.
Foust and the housing authority board are considering converting the agency from public housing to Rental Assistance Demonstration, or RAD, also part of the U.S. Department of Housing and Urban Development. RAD is part of HUD’s “rental housing preservation strategy,” an effort to preserve the nation’s stock of deeply affordable rental housing, promote efficiency within HUD and build stable communities.
“It was kind of a no-brainer,” local board chairman Sonny Carpenter said. “The writing as on the wall, as I see it. The housing that we have today will still look the same, and it won’t affect the tenants or how they apply for housing.”
Salisbury Housing Authority would be one of the first in the nation to use a mix of RAD, loans and tax credit equity to create a more sustainable way to fund affordable housing, Foust said. Traditional HUD funding has decreased for about six years, and the housing authority received $500,000 less last year and had to eliminate five jobs, he said.
With RAD, federal funding would be based on a contracted rent for each apartment determined by location and condition. The tenant pays 30 percent, and the government pays the difference, Foust said.
Then, the authority can take out loans and compete for tax credits — the Salisbury authority was the only public housing agency in North Carolina to win tax credits last year — to pay for capital improvements, he said.
“I believe that it will be a good thing and a positive opportunity for the housing authority in Salisbury to be innovative about how they support public housing in the future,” said Dionne Nelson, CEO for Laurel Street Residential, a mixed income housing company in Charlotte developing the new Civic Park.
Rent would not increase for the majority of tenants, Foust said, however about 150 families would pay more.
All tenants, including the 150 or so who have their rent capped, would pay 30 percent of their income in rent. Under the new model, the authority would do away with the rent cap.
The minimum rent for a public housing apartment would remain $50 a month. About 80 families pay the minimum.
The authority would rehab dozens of units at one time, moving families into vacant apartments temporarily and then offering them a renovated unit either in their original complex or another neighborhood, Foust said. The rehabilitation would cost about $12 million and would not include the newest project called Carpenter’s Corner or Civic Park, which organizers of the West End Transformation Plan hope to demolish and rebuild soon.
The housing authority would need dozens of additional vacant apartments to temporarily house people from Civic Park if the agency wins funding for the second phase of the rebuild. The first phase — 80 new units that will go up on vacant land — won tax credit funding last year.
To come up with a total of 50 vacancies by May, the authority has stopped renting to new families. If the conversion to RAD goes through, no one new will move into a Salisbury Housing Authority property for the next two and a half years, Foust said.
The authority already has an 18-month waiting list and stopped taking new applications three months ago.
No one is being asked to leave their home, he said. When tenants move out by attrition, the apartment will remain vacant, he said. So far, there are about 14 vacancies.
In a typical year, about 120 new families will move into one of the authority’s eight complexes. That means more than 250 families who would have used public housing will have to find shelter elsewhere during the next two years.
But Foust said holding onto vacant apartments for temporary housing is the only way to rehabilitate existing units and hopefully rebuild Civic Park.
Under RAD, engineers and architects will inspect every apartment and devise a plan for improvements needed in five, 10 and 20 years. The complexes would be converted to RAD one at a time as they are vacated, rehabilitated and reopened.
Foust has hired a developer to arrange financing through 15-year loans. Rental income would pay the debt service.
Traditional public housing is coming to an end, Carpenter said. Across the country, about 100,000 public housing units have been boarded up and shut down because the government cannot afford to maintain them, Foust said.
Carpenter said he’s proud that has not happened in Salisbury, where the public housing complexes look much as they did 30 years ago.
“You can ride by them and they are very attractive,” board member Mary Frances Edens said. “But they are old and outdated. They need updating.”
The housing authority recently scored 96 out of 100 points on a federal assessment and earned “high performer” status.
Contact reporter Emily Ford at 704-797-4264.

SPENCER — Members of the Spencer Fire Department and the Elizabeth Hanford Dole Chapter of the American Red Cross in... read more