For Obama, State of the Union address focused on what’s achievable 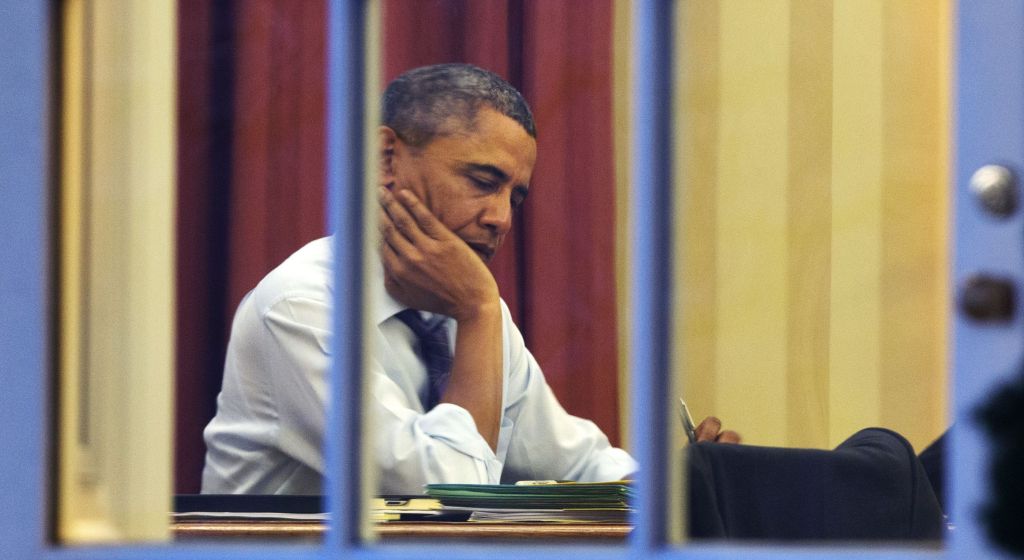 WASHINGTON (AP) — No longer about bold ambitions, this year’s State of the Union address will focus more on what’s actually achievable.
For the White House, that dose of realism is aimed at avoiding a repeat of 2013, when a long list of unfulfilled policy goals — including gun control and an immigration overhaul — dragged President Barack Obama down like an anchor. Tonight’s prime-time address will focus instead on redefining success for Obama — not by what he can jam through Congress but rather by what he can accomplish through his own presidential powers.
He is expected to announce executive actions on job training, retirement security and help for the long-term unemployed in finding work. All are part of the White House focus this year on boosting economic mobility and narrowing the income gap between the wealthy and the poor.
Another action Obama is expected to announce is the creation of a new retirement savings plan geared toward workers whose employers don’t currently offer such plans. Because commercial retirement accounts often have fees or high minimum deposits that are onerous for low-wage workers, this program would allow first-time savers to start building up savings in Treasury bonds. Once the savings grew large enough, a worker could convert the account into a traditional IRA, according to two people who have discussed the proposal with the administration. Those people weren’t authorized to discuss it ahead of the announcement and insisted on anonymity.
“Tomorrow night, it’s time to restore opportunity for all,” Obama said Monday on the video-sharing site Vine, part of the White House’s broad social media promotion of the speech.
“I think the way we have to think about this year is we have a divided government,” White House senior adviser Dan Pfeiffer said. “The Republican Congress is not going to rubber-stamp the president’s agenda. The president is not going to sign the Republican Congress’ agenda.”
The address, delivered before a joint session of Congress and millions of Americans watching on television and the Internet, typically garners a president his largest audience of the year. It also provides perhaps his best opportunity to try to persuade skeptical Americans that he still wields substantial power in Washington, even if he can’t break through a divided Congress.
The risk for Obama in centering his agenda on his own executive actions is that those directives often are more limited in scope than legislation that requires congressional approval. And that raises questions about how much impact he can have.
For example, Obama can collect commitments from businesses to consider hiring the long-term unemployed, as he’ll announce Tuesday night, but without the help of Congress he can’t restore expired jobless benefits for those Americans while they look for work.
White House officials contend executive actions should not automatically be pegged as small bore, pointing in particular to steps the president can take on climate change, including stricter regulations on power plants and new car efficiency standards. And some Democrats are cheering the strategy, saying it’s time for Obama to look beyond Capitol Hill after spending more than half his time in office mired in congressional gridlock.
“They spent far too much time actually trying to think they could negotiate with House and Senate Republicans,” said Jim Manley, a longtime adviser to Senate Majority Leader Harry Reid, D-Nev. “I, for one, am glad that they finally decided to go around Congress to the extent possible.”
Not surprisingly, Republicans have been dismissive of the president’s go-it-alone approach.
Sen. Roy Blunt, R-Mo., suggested that some executive actions might run up against legal challenges, saying Congress should insist Obama “find the Constitution and follow it.” And House Speaker John Boehner’s office said the strategy was simply a rehash of earlier Obama efforts to focus on executive authority when action in Congress stalled, including a 2011 effort that the White House branded, “We Can’t Wait.”
Obama aides say this year’s push will be more extensive than in the past. White House officials have been trying to boost involvement by often-sidelined Cabinet members, and the president has brought in John Podesta, a prominent advocate for executive action, to serve as a senior adviser for one year.
Obama won’t be abandoning Congress completely. He’s expected to make another appeal during the State of the Union for passage of a sweeping immigration bill, which stalled in the House after getting through the Senate last summer. The president also is likely to make a new pitch for two proposals that got little traction after they were first announced in last year’s address to Congress: expanding access to early childhood education and increasing the federal minimum wage from $7.25 an hour to at least $10 an hour.
There are glimmers of hope for him on at least some of those issues. House Republicans are readying their own immigration proposal addressing border security, increased visas for high-skilled workers and legalization for some of the 11 million immigrants living in the U.S. illegally, though stopping short of providing a pathway to citizenship. And with some GOP lawmakers also increasingly focused on economic inequality issues, White House officials say conditions could be right this year for pursuing a minimum wage increase.

Amateur club’s monthly meet is “capture the flag” with…