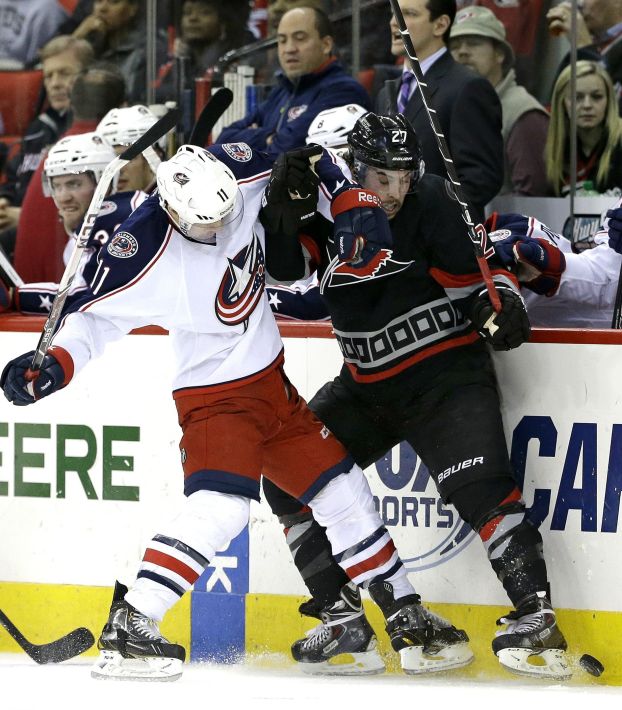 Associated Press
RALEIGH — The Carolina Hurricanes talked in the locker room before Monday night’s game about how they felt they were due for a win against the Columbus Blue Jackets.
Columbus had won seven straight in the series, including a dramatic comeback victory the last time the teams met in Raleigh at the end of December.
“We knew we owed ‘em one,” Eric Staal said. “We wanted to pay them back for some of the good games they played against us.”
Staal and his brother, Jordan, helped Carolina make that pregame prediction a reality, combining to score three goals in a 2:47 span in the third period and lifting the Hurricanes to a 3-2 victory.
Jordan Staal scored the tiebreaker with 5:55 remaining after Eric had scored twice to help the Hurricanes erase a two-goal deficit and earn their fourth consecutive victory. Anton Khudobin made 22 saves.
Carolina moved one point ahead of Columbus in the congested Metropolitan Division with the win.
“We knew it was a big game,” Carolina coach Kirk Muller said. “You don’t want to dwell a lot on it — let the guys figure it out.”
R.J. Umberger and Derek MacKenzie scored for the Blue Jackets. Columbus lost its second straight after winning eight in a row.
“I don’t know if we were trying to hold on or if we were playing the game to win,” Columbus coach Todd Richards said. “We gave up three goals in less than 3 minutes. For 57 minutes, I thought we managed it pretty well. Those three minutes, that’s the game.”
After shutting out Carolina in the teams’ last meeting, reigning Vezina Trophy winner Sergei Bobrovsky made 32 saves for Columbus.
On the game-winner, Jordan Staal rushed into the zone against defenseman Ryan Murray. After cutting to the middle of the ice, he nudged a backhander past Bobrovsky while fighting off Murray.
“It was a fun comeback,” Jordan Staal said. “I had some speed coming low, and just kind of went for it from there. I tried to get my reach out there.”
Trailing 2-0, Eric Staal got the Hurricanes’ comeback started when he beat Bobrovsky between the legs after a pass from Alexander Semin. Staal then tied the score with 7:42 remaining after Jiri Tlutsy fed him in the slot. Staal’s shot fluttered, but the puck sneaked inside the post.

Columbus jumped on Carolina in the first period, scoring goals 17 seconds apart to take an early two-goal lead.
MacKenzie got the Blue Jackets’ first goal. Fedor Tyutin took a wrist shot from the slot that hit the post. The rebounded bounced to MacKenzie, who put the puck in the goal before Khudobin could get back in position.
After the ensuing faceoff at center ice, the Blue Jackets forced a turnover along the boards in the Canes’ zone. The puck eventually made its way to Umberger, who was alone in front of the net, and he scored his third goal in four games.
“We came out of the gate well; we were playing well and we went after them,” Richards said.
After scoring goals on two of their first three shots, the Blue Jackets continued to control much of the action, taking the game’s first seven shots before Carolina asserted itself.
The Hurricanes tied a season high with 17 shots in the second period.
NOTES: Columbus came into the game with the best winning percentage in Eastern Conference for the month of January (.818). … Semin extended his point streak to six games for the Hurricanes. … Carolina recalled Aaron Palushaj from Charlotte earlier on Monday. He will be eligible to play in the Hurricanes’ game at Montreal on Tuesday.