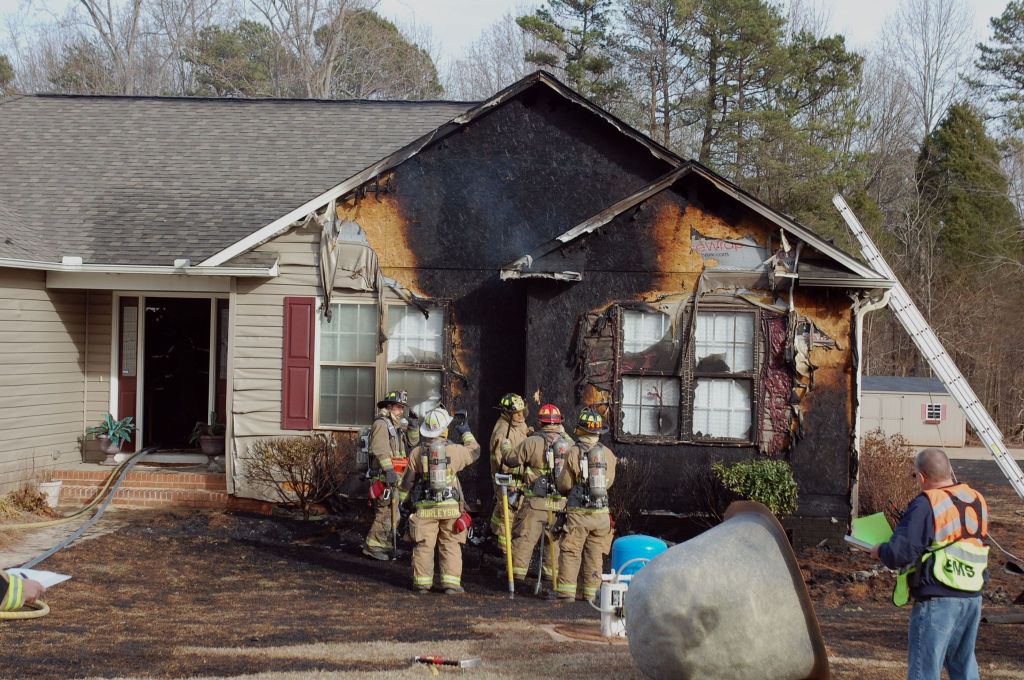 SALISBURY — Sparks from a Shue Road home’s patio fireplace caused a grass fire that ignited a house next door Sunday afternoon.
The 2:45 p.m. house fire occurred at 3050 Shue Road, directly across from Knollwood Elementary School.
The house was empty and recently has been for sale. The owners are now living in Tennessee, reports said.
Most of the damage was to the front, right side of the home and into the attic or roof line. The roof appeared to be sagging on the south side of the structure.
Sunday’s high winds blew the grass fire from 3040 Shue Road directly toward the front and south side of the house at 3050 Shue Road.
According to Rowan County fire investigators, the homeowner at 3040 Shue Road was burning sawdust in a raised fireplace on his patio.
Sparks from the fire caught the back yard on fire and pushed it north toward the house next door.
Both yards were charred black from the fast-spreading fire, which the homeowner at 3040 Shue Road tried to fight with a garden hose.
In the end, Locke, South Salisbury and Bostian Heights departments responded, with assistance from the Rowan Rescue Squad.
Rowan County Fire Investigator Brian Alley intended to notify the homeowners in Tennessee Sunday afternoon.
Alley said conditions were perfect for brush and grass fires which local departments in the county and region were responding to all weekend.
Factors fueling Sunday’s fire included low humidity, dry grass, the cold and winds from the south.
“The wind hit and took off with it,” Alley explained.
Alley praised the quick work of the responding departments: “They’ve done a heckuva job knocking it down,” he said.
Temperatures actually rose during the day Sunday to a high of about 51 degrees after a series of nights well below freezing.
Alley cautioned against any outside fires until conditions change. AccuWeather forecasts say temperatures will take another nosedive after reaching a high of about 57 degrees today.
Lows Tuesday and Wednesday nights are expected to again be in the teens, and there is no precipitation forecast over the next five days.
Contact Mark Wineka at 704-797-4263.