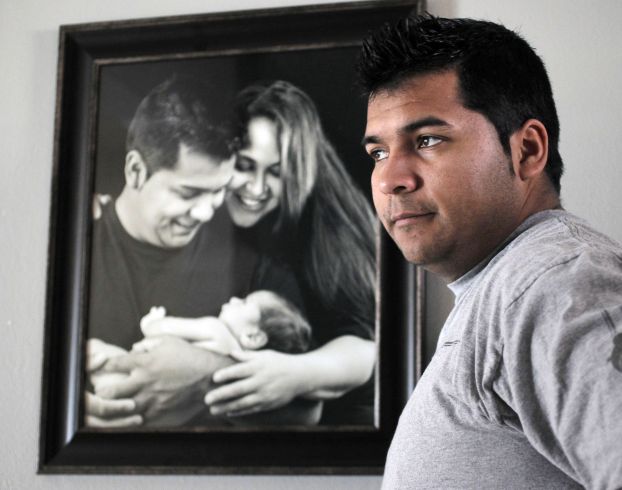 FORT WORTH, Texas (AP) — A brain-dead, pregnant Texas woman’s body was removed from life support Sunday, as the hospital keeping her on machines against her family’s wishes acceded to a judge’s ruling that it was misapplying state law.
Marlise Munoz’s body soon will be buried by her husband and parents, after John Peter Smith Hospital in Fort Worth announced it would not fight Judge R.H. Wallace Jr.’s Friday order to pronounce her dead and return her body to her family. The 23-week-old fetus she was carrying will not be born.
The hospital’s decision Sunday brings an apparent end to a case that became a touchstone for national debates about the beginning and end of life, and whether a pregnant woman who is considered legally and medically dead should be kept on life support for the sake of a fetus.
Munoz’s husband, Erick Munoz, sued the hospital because it would not remove life support as he said his wife would have wanted in such a situation. Erick and Marlise Munoz worked as paramedics and were familiar with end-of-life issues, and Erick said his wife had told him she would not want to be kept alive under such circumstances.
But the hospital refused his request, citing Texas law that says life-sustaining treatment cannot be withdrawn from a pregnant patient, regardless of her end-of-life wishes.
Wallace sided Friday with Erick Munoz, saying in his order: “Mrs. Munoz is dead.”
Wallace had given the hospital until 5 p.m. Monday to comply with his order, but officials there announced Sunday morning that it would forego any appeal.
“From the onset, JPS has said its role was not to make nor contest law but to follow it,” according to a statement released by hospital spokeswoman J.R. Labbe. “On Friday, a state district judge ordered the removal of life-sustaining treatment from Marlise Munoz. The hospital will follow the court order.”
Shortly afterward, Erick Munoz’s attorneys announced that she had been disconnected from life support about 11:30 a.m.
“May Marlise Munoz finally rest in peace, and her family find the strength to complete what has been an unbearably long and arduous journey,” they said in a statement.
Erick found his wife unconscious in their Haltom City, Texas, home Nov. 26, possibly due to a blood clot. Doctors soon determined that she was brain-dead, which meant that she was both medically and legally dead under Texas law, but kept her on machines to keep her organs functioning for the sake of the fetus.
Erick Munoz’s attorneys told Wallace on Friday that doctors had performed medical care on her body over his protests.
“There is an infant, and a dead person serving as a dysfunctional incubator,” attorney Heather King said.
Marlise Munoz’s parents, Ernest and Lynne Machado, agreed with Erick Munoz and sat next to him at Friday’s hearing.
But Larry Thompson, a state’s attorney arguing on behalf of the hospital Friday, said the hospital was trying to protect the rights of the fetus as it believed Texas law instructed it to do. The hospital’s attorneys cited a section of the Texas Advance Directives Act that reads: “A person may not withdraw or withhold life-sustaining treatment under this subchapter from a pregnant patient.”
“There is a life involved, and the life is the unborn child,” Thompson told the judge.
Legal experts interviewed by The Associated Press said the hospital was misreading the Texas Advance Directives Act and that the law doesn’t have an absolute command to keep someone like Munoz on life support.
“This patient is neither terminally nor irreversibly ill,” said Dr. Robert Fine, clinical director of the office of clinical ethics and palliative care for Baylor Health Care System, in an interview earlier this month. “Under Texas law, this patient is legally dead.”
Erick and Marlise Munoz already had one son, and Erick Munoz told The Associated Press how he had once looked forward to the birth of their second child. But both the hospital and his attorneys agreed the fetus inside Marlise Munoz could not be delivered this early, and not much is known about the fate of children born to mothers who have suffered brain death.
Munoz’s attorneys said the fetus had significant abnormalities, including a deformation of the lower body that made it impossible to determine a gender.
Whether the Munoz case leads Texas to change the law remains unclear. In recent years, the Legislature has enacted several new anti-abortion restrictions, including setting the legal guideline for when a fetus can feel pain at 20 weeks — a milestone Marlise Munoz’s fetus had passed about three weeks ago.
The case has been noted by Republican Texas Gov. Rick Perry and the two leading candidates running to replace him, but none of them has called for any new laws yet or action as a result of the case.
Republican Attorney General Greg Abbott, through a spokesman, said the case was a “heartbreaking tragedy” and that “Texas strives to protect both families and human life, and we will continue to work toward that end.”
Texas Sen. Wendy Davis, a Democrat from Fort Worth, said through a spokeswoman that any decision like this “should be made by Mrs. Munoz’s family, in consultation with her doctors.”
————
Follow Nomaan Merchant on Twitter at http://www.twitter.com/nomaanmerchant.