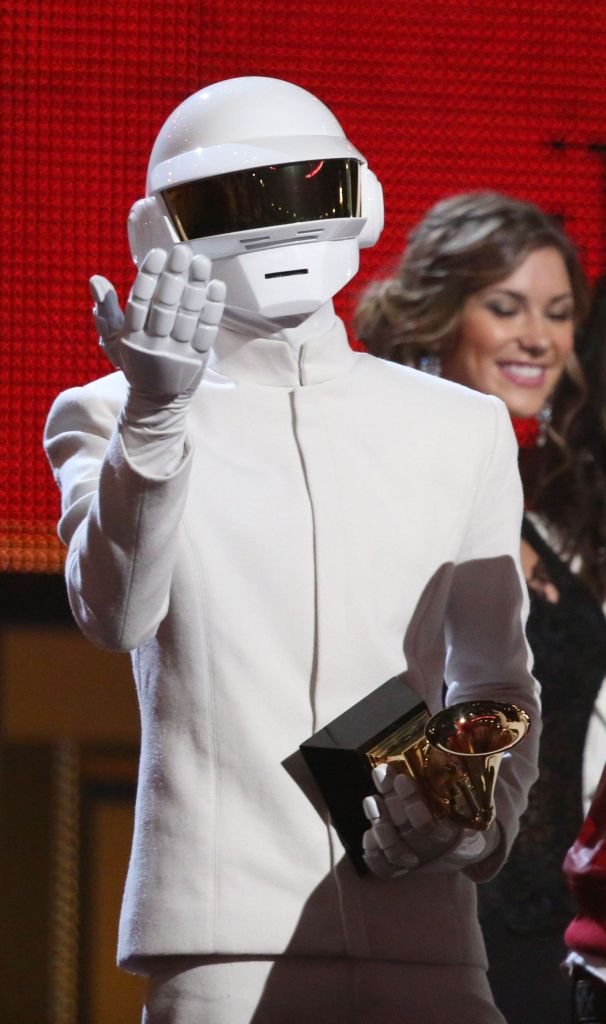 LOS ANGELES (AP) — Daft Punk’s electronic-funk grooves have won big at the Grammys.
The French electronic duo’s “Random Access Memories” won album of the year and their infectious hit, “Get Lucky,” won record of the year at the awards show. The song features Pharrell Williams and Nile Rodgers.
Daft Punk, who sports helmets in public, won four awards, as did Pharrell Williams and Macklemore & Ryan Lewis.
“Well, I suppose the robots would like to thank….” joked Williams, who also won non-classical producer of the year. “You know honestly, I bet, France is really proud of these guys right now.”
Daft Punk also picked up honors for best dance/electronica album for “Random Access Memories” and pop duo/group performance for “Get Lucky,” which earned Williams a trophy. Williams had seven nods, but competed with himself and could only take home four awards, which he did.
While the men dominated, Lorde was the princess of the Grammys: Her hit “Royals” won record of the year and best pop solo performance.
“Thank you everyone who has let this song explode, because it’s been mental,” she said.
Macklemore & Ryan Lewis won best new artist and rap album for “The Heist,” beating efforts from Kendrick Lamar, Jay Z, Kanye West and Drake.
“Wow, we’re here on the stage right now,” said Macklemore, thanking fans first, then his fiancee and team. “I want to say we made this album without a record label, we made it independently and we appreciate all the support.”
The duo performed the gay-acceptance hit “Same Love,” and 33 couples — some same-sex — got married in the middle in the performance as Queen Latifah officiated. Madonna joined in wearing an all-white suit and hat, and sang “Open Your Heart” and some of “Same Love” with Mary Lambert. Keith Urban cried and Katy Perry caught a bouquet during the performance.
Beyonce kicked off the Grammys with a steamy and smoky performance of “Drunk In Love:” She started on a chair and then grinded in a revealing black outfit. Jay Z emerged in a fitted suit to rap his verse, and the couple — parents of little Blue Ivy — held hands and danced together.
Imagine Dragons and Kendrick Lamar collaborated onstage to create an electrifying performance, as the acts sported all-white and went from rap song to rock song. Robin Thicke performed with Chicago, singing the group’s hit songs before going into “Blurred Lines,” which energized the crowd. Thicke finished the performance singing on the floor.
Perry sang “Dark Horse” in an eerie forest with fire that mirrored the song’s vibe, and John Legend and Taylor Swift — who whipped her head, and hair, back and forth — played pianos during their slow songs. Pink twirled in the air in her signature Cirque du Soleil-form.
Swift, nominated for album of the year, lost best country album in a surprise upset to rising singer-songwriter Kacey Musgraves.
“Oh my goodness. Oh my god. I can’t even. I can’t even,” said a teary-eyed, but happy Musgraves, whose “Same Trailer Different Park” won the honor. “I got to make a record that I poured myself into and I’m so proud of.”
The singer also beat Swift for best country song and was nominated for new artist.
Macklemore & Lewis’ wins, which include best rap song and rap performance for “Thrift Shop,” come after the Grammy rap committee almost ousted the group from its categories. A source told The Associated Press that the rap committee rejected the duo, but that was later overruled by the general Grammy committee. The rap committee felt Macklemore & Lewis should qualify for the pop awards instead because of their massive success on Top 40 radio.
The source, who attended the general Grammy meeting, spoke on the condition of anonymity because the meeting was private.
Justin Timberlake, who wasn’t up for any of the major awards, won three trophies, including best R&B song for “Pusher Love Girl” and music video for “Suit & Tie,” which also earned Jay Z a Grammy. Jay Z and Timberlake also won best rap/sung collaboration for “Holy Grail.”
“I want to thank God — I mean a little bit for this award — but mostly for all the universe for conspiring and putting that beautiful light of a young lady in my life,” Jay Z said, looking at Beyonce. “I want to tell Blue that, look, ‘Daddy got a gold sippy cup for you.”’
Jay Z, keeping up the decade-long Grammy tradition of rappers leading in nominations, was the night’s front-runner with nine.
Bruno Mars won best pop vocal album with his sophomore release, “Unorthodox Jukebox.”
“Ma, I know you’re watching. I hope you’re smiling. I love you very much,” said Mars, remembering his mother, who passed away last year. Mars’ father attended the awards show.
Paul McCartney, engineer Bob Ludwig and gospel singer Tye Tribett were double winners. Imagine Dragons and Rihanna also picked up trophies.