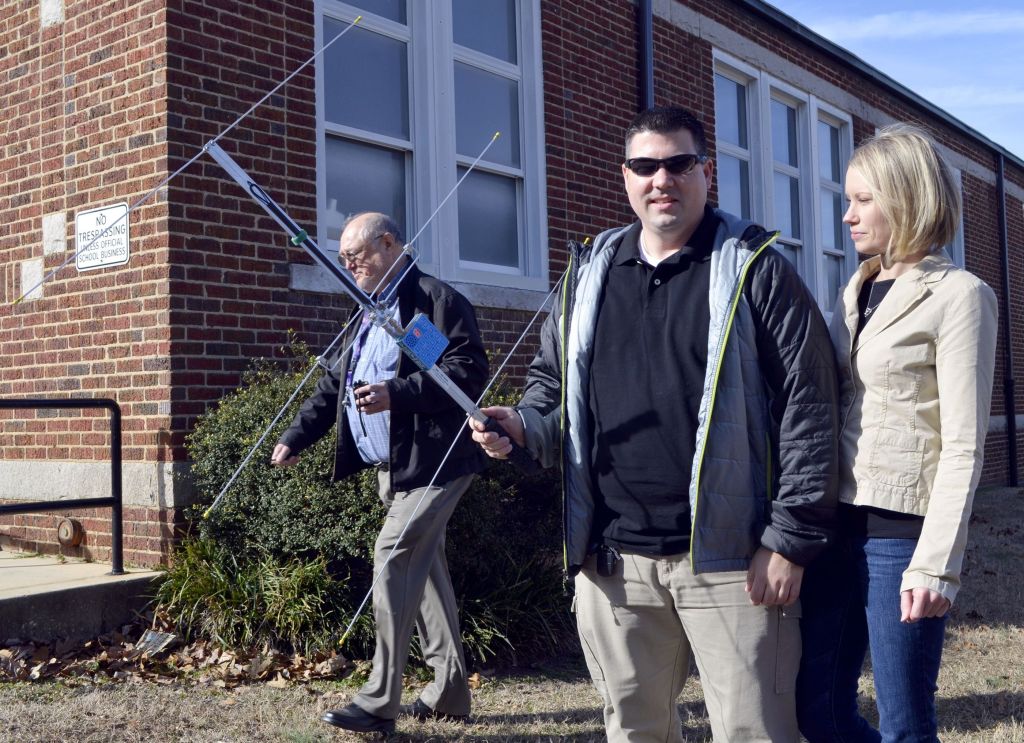 SALISBURY — Every month, members of the Rowan Amateur Radio Society, plus anybody else who wants to go along for the ride, meet up in town and go fox hunting.
It’s not what you think. This “fox” doesn’t run, for starters.
It’s a 5-watt radio transmitter, packed into an old ammunition can.
The object of the game is to find the transmitter, which a member hides somewhere in Rowan County.
Members meet at a central location. Once the “fox” goes live, they get their bearings, then take off in cars and trucks.
It’s a race against time, but it’s also a test of skill to see who can find the “fox.”
And, in an emergency, those skills can count.
Amateur radio volunteers can use those triangulation skills to find illegal transmitters or sources of interference — even to locate radio beacons on downed aircraft.
“I like using the map, the orienteering part of it,” said Jared Gohlke, a licensed amateur radio operator.
Sunday, Gohlke and his girlfriend, Stacy Austen, met up with six others for this month’s fox hunt.
They followed the radio signal south from Salisbury, finally meeting up with others in Faith, near the elementary school.
With Austen at Gohlke’s side, the two used an attenuator — a radio that measures signals over distance — to home in on the source.
Austen doesn’t have a “ham radio” license, but you don’t need one to go fox-hunting.
All you need is a radio listening to the right frequency, and the skill and patience to search out the signal.
Gohlke, meanwhile, is a trained emergency responder. He’s the district emergency coordinator for the Amateur Radio Emergency Service, or ARES, in this district of North Carolina.
“I like that challenge of being able to locate something,” Gohlke said.
And fox hunts give him a chance to keep his tracking skills honed.
“It’s a challenge,” said club member Gary Lang, who got the privilege of hiding the “fox” this time.
“It’s a grown-up game of capture the flag using homemade technology, homemade equipment,” Lang said. “It’s the challenge of finding something that’s hidden, and you learn about the capabilities of radio.”
There are some ground rules for these monthly hunts.
The “fox” has to be hidden on public property, and it’s got to be outdoors, at or below eye level.
But that doesn’t mean it’s easy to find the dark-green ammo can with an antenna on top. Placed under a bush or hidden behind a rock, it’s easy to miss.
The first task is to nail down where the signal is coming from.
Most of the time, radio waves spread out from the antenna like ripples in a pond.
In a perfect world, you should be able to draw a line on a map from where you are in the direction of the signal, then go some distance away and do the same thing again.
Where those two lines meet on the map is where the transmitter ought to be — in a perfect world.
The test for Lang, or whoever’s hiding the “fox,” is to make things less than perfect.
Jim Winters, member of the club, said it’s easy to redirect the signal.
“It’ll bounce off any metallic object,” Winters said. “Trees, rocks, anything like that will act as absorbers, making it appear the signal is coming from a different direction.”
Once time, fellow club member Ralph Brown said, Lang hid the “fox” in a cleft between two rocks at a cemetery near Faith.
“When you tried to get a reading on it from Salisbury, it made it look like the signal was coming from down around China Grove,” Brown said.
Another time, Lang said, when members used to start the hunt at the Salisbury Mall, he got there early and hid the transmitter on the other side of the building.
The signal bounced off the mall itself, and members drove away in the wrong direction.
“It was about 500 yards away, and it took them an hour to find it,” Lang said.
Once the first person finds the main transmitter, the second phase of the hunt begins.
A second, tiny radio is hidden within sight of the first “fox,” and the challenge starts again.
It could be that the first person to reach the site might not be the first person to find the second transmitter.
The Rowan Amateur Radio Society has been around since 1937, but fox hunts are still relatively new to the group.
Brown said spy movies from the 1940’s inspired him to get into amateur radio — “the Nazis with their equipment, trying to find where a spy was transmitting from,” he said.
“Of course, the more I got into it, the more I found out it wasn’t really easy,” Brown said.
Neal Goodman, the current club president, is a Rowan County deputy sheriff. He said he’s never had to use his fox-hunting skills in the line of duty, but the principles are the same as those used when a plane goes down.
“The real-world application is anything from finding someone that is causing interference to amateur communications or legitimate radio transmissions, to finding downed aircraft, lost hikers, et cetera,” Lang said.
But mostly, the monthly fox hunt is a way to have fun with something they love —not to mention keeping their skills sharp in case they’re needed one day.
Contact Hugh Fisher via the editor’s desk at 704-797-4244.