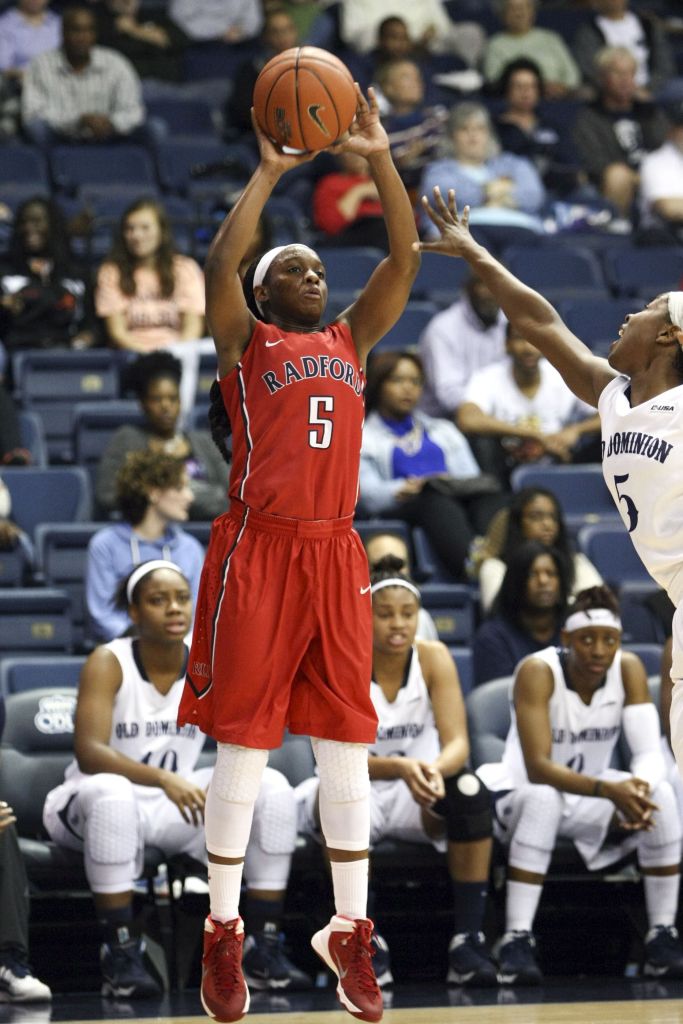 RADFORD, Va. — Growing up in Cleveland, on the western edge of Rowan County, Radford guard Ayana Avery frequently competed against the neighborhood boys.
“I got pushed around and I got knocked down,” the 5-foot-5 Avery said. “But it helped me out a lot. I wouldn’t be where I am now if not for those days.”
Where Avery is now is on the verge of breaking her school’s record for 3-pointers.
In Radford’s 20 games, she’s connected 66 times from long range. Radford’s record for a single season is 67, a mark that’s been in the books since Patrinda Toney, Radford’s all-time scoring leader, was filling it up in the late 1980s. It’s a record Avery could own as soon as Thursday when Radford travels to Conway, S.C., to play Coastal Carolina.
It’s been crazy for Avery lately. She made a school-record eight 3-pointers against High Point last Thursday and made seven more Saturday against Campbell.
High Point is Radford’s closest stop to Rowan County, so there was a large contingent of family and friends on hand to watch her. The extra fans didn’t exactly make her nervous. She was 8-for-11 on 3s.
“You make two or three and your confidence grows,” Avery said. “My teammates have been looking for me, and I’ve been knocking down some shots. I’ve gotten hot a few times. I just hope it continues.”
Avery has scored at least 20 points in her last three outings to raise her average to a team-leading 14.5 points per game, eighth in the Big South Conference. She’s leading the league in 3-pointers and has scored 198 of her 290 points from behind the bonus line. She’s shooting a respectable 37 percent from the field (12th in the league) and 35.3 percent on 3s (sixth).
Avery says her favorite spots for triples are the corners, but she also can make bombs from the wings when the opportunity presents itself.
“When Ayana is in rhythm, she is fun to watch,” Radford coach Mike McGuire said. “Her teammates do a nice job of creating space for her and getting her the ball.”
Avery was a prolific scorer at West Rowan High for coach Erich Epps. As a freshman, she scored 35 against Concord. As a junior, she scored 40 against North Rowan, 41 against Carson and a school-record 42 against North Iredell. Those are the three biggest individual games in West history.
She scored 1,995 points at West to break Hillary Hampton Nixon’s program record and averaged 19.2 points per game over a four-year varsity career.
The 1,995 points could stand for a while, although Avery is well aware of West’s super sophomore Khaila Hall.
“That’s my cousin, and she’s really fast,” Avery said. “She lives right down the street.”
Even with her small stature, there never was much doubt Avery would be a Division I player. She signed with Radford, a school not many people in Rowan had heard of, but the Highlanders are a program with some history. They compete against schools such as Winthrop, Coastal Carolina, Gardner-Webb, Campbell, Charleston Southern and UNC Asheville.
Radford is in southern Virginia. It’s in the Blue Ridge Mountains near where Interstate 77 runs into Interstate 81. It’s not far north of the N.C. counties of Stokes and Surry. Radford is a small town, about half the size of Salisbury.
“It is kind of the middle of nowhere,” Avery said. “It’s quiet and it snows off an on. Outside of basketball, we go to the mall or just hang out and watch TV.”
It’s been a tough year for Radford. The Highlanders have won only three of their 20 games and only once in the Big South. That was against Longwood. Avery made four 3-pointers and scored 20 points to lead a 57-51 victory.
Avery is a junior. She mostly came off the bench her first two seasons, filling the traditional sixth-man role of instant offense. She made 48 3-pointers and averaged 7.2 points as a freshman. Her stats were almost identical as a sophomore — 44 3s and 7.7 points per game.
She served noticed this season would be different right away. She had 21 points and 11 rebounds opening night and was named Big South Conference Player of the Week.
“I’ve picked up a lot different role this year,” Avery explained. “Before, I was just coming off the bench and trying to make some 3s. Now I’m playing 35 minutes (she’s second in the Big South in minutes played) instead of 15. And now I’m counted on to be more of a vocal leader.”
Avery leads Radford with 30 steals, which is not surprising. But it is surprising that she’s the team leader in rebounds. She pulls down 6.0 per game and has rebounded in double digits four times.
“It’s not like I’ve grown any from high school — I’m still just 5-5,” she said with a laugh. “But we’re really small and we’ve had some injuries, so I’ve got to rebound. I just try to box out those bigger girls out and go up and grab it.”
Avery is a journalism major and understands she could become a headline story. She has 158 career 3-pointers.
The record at Radford is Kylie Williamson’s 203, and that’s a mark Avery can break if she stays healthy.