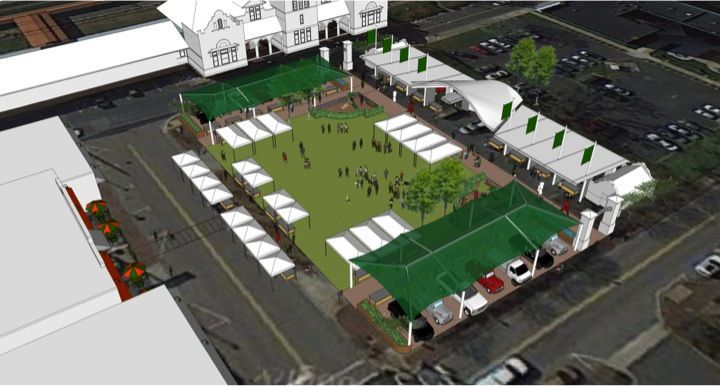 SALISBURY — Using dozens of drawings and computer-generated images, four teams of architects revealed their vision Friday for a proposed farmers market and cultural plaza in front of Salisbury Station.
A large, enthusiastic crowd turned out at Lee Street Theater to see and hear the culmination of a three-day design workshop where 15 architects and landscape architects got serious about bringing fun to downtown Salisbury.
Many in the audience said they were impressed with ideas for the “centerpiece,” the temporary name for the project that centers around the police car parking lot across from the depot.
“I am so pumped up,” said Jenn Selby, chairwoman of the Rowan Arts Council and the Department of Fine Arts at Rowan-Cabarrus Community College. “I’m really excited about all the designs, but I really like the one that incorporated the sculpture pergola.”
Selby and other artists and musicians participated in the design charrette as well, giving input as architects brainstormed and sketched. Selby said she considered the project from several viewpoints — artist, marketgoer and mother — and enjoyed a formal interview between designers and representatives from RCCC, Catawba College and Livingstone College, one of many stakeholder sessions including a two-hour lunch with farmers.
Paul Fisher of F&M Financial Corp. said he approves of the market and plaza concept. One of the city’s most generous philanthropists, he said the plans would restore a connection between Easy Street and the depot.
Son Steve Fisher, president and CEO of F&M Bank, encouraged steering committee members to keep private events in mind, as well as public gatherings, as they come up with a final proposal based on ideas generated by the design teams.
F&M owns the Trolley Barn, which like the depot is a popular venue for weddings and other private events. Demand for outdoor space is high, Steve Fisher said, and the proposed plaza would attract people renting either indoor venue.
“Make sure that space is available for lease as well for large, private events,” he said. “Use the space for public use but also for cash-flow use.”
Each team had to include permanent restrooms, parking and at least 37 stalls for the farmers market in their design. Not bound by budget constraints or whether surrounding property is privately owned, the teams were free to use their creativity to come up with ideas for not only the existing police car parking lot but the entire area.
Designs incorporated visual arts, performing arts, playgrounds, water features, seating, shade and more. Most teams suggested a parking deck in the gravel lot across from Lee Street Theater for police cruisers and public parking. Most also proposed a permanent structure of some kind for the farmers market.
All teams used in their design the building that currently houses White Tire Center at the corner of North Lee and East Liberty streets, which is privately owned.
One team suggested putting a year-round public market inside the White Tire building and removing one of the large bay doors, allowing access to the Railwalk that currently dead ends behind White Tire.
“They are not just concentrating on that one parcel of the police parking lot, but also the entire Railwalk,” said Mark Lewis, president of Downtown Salisbury Inc. “There are four different alternatives that give us an opportunity to see what the future might look like.”
Organizers include the city, tourism authority and DSI. They have more than $250,000 in the bank for the project. Funding some of the designers’ suggestions could cost millions, but many other ideas could become reality for far less.
“I appreciate the architects for not putting up some million-dollar dream,” Lewis said. “We need a farmers market pretty quick.”
Located for years in the 300 block of South Main Street, the farmers market moved to the Wrenn House parking lot last year after the city sold the previous location to Integro Technologies.
While the final design must balance the historic nature of the area surrounding Salisbury Station, Lewis said incorporating the arts is crucial to economic development.
“I’m one of the big advocates of the creative economy,” Lewis said. “Anything we can do that will promote the arts and more importantly citizen interaction with the arts is important.”