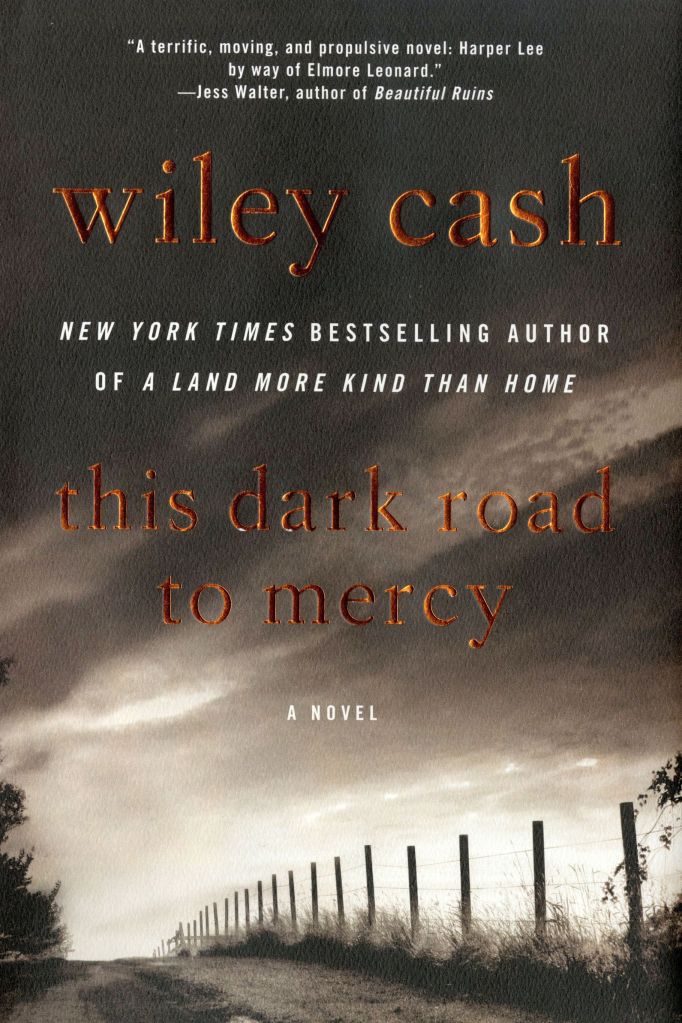 “This Dark Road to Mercy” takes readers on a nerve-wracking journey with two innocent girls who need less danger and more love in their lives.

Wiley Cash’s second novel is another trip through the South with a universal sad truth — children are being abandoned all over the world, being used as pawns and growing up too fast or not at all. The alleged adult parents should not have procreated. Children are not something you can set aside until they grow up.

Easter (guess when she was born?) and Ruby (Mom’s favorite stone) are living in a group home after their mother dies of a drug overdose. Their father, who never bothered to marry their mother, is long gone, running away from responsibility and a baseball career that struck out.

So when Wade Chesterfield “drops by” the ballfield where Easter is playing, she knows it’s bad news.

“I’d always called him ‘Wade’ because it never felt right to think of him as ‘Dad’ or ‘Daddy’ or anything else kids are supposed to call their parents. Parents who got called things like that did stuff for their kids that I couldn’t ever imagine Wade doing for us.”

Cash again uses three first-person narrators, including Easter, 12, who has good instincts. She knows right away that the second man who shows up staring at her and Ruby is even worse than Wade, and she’s right. Pruitt, another narrator, is the creepiest element in this book. He’s also the coldest, flattest voice. His emotion shows only when his nose bleeds every time he’s ready to do violence.

Wade has given up all parental rights to the girls and has no right to even see them. But young Ruby easily falls for his smiles and promises. So when he shows up in the middle of the night telling the girls they’re in danger, Easter goes along, despite her nose for trouble. She’s got Ruby to consider and she can’t let her go alone.

In steps third narrator, guardian ad litem Brady Weller. He doesn’t play a big part in the book, but his character, a former cop convicted in an accidental death, is ripe for future development. And he is something of a savior in the nail-biting climax of the novel.

This is Easter’s story. She tells it like it is — like she sees it — no frills attached.

It takes Easter a couple days to figure out why Wade snatched them from their bedroom in their nightgowns, but she knows immediately that other strange man is the source of the problem. And then she finds the bag of money Wade is stashing. She doesn’t fathom the danger, but Wade leaves plenty of clues, like having the car painted and dying his hair and Easter’s.

The police in Gastonia are not so interested in finding the girls when it becomes obvious they’re with their father. They’ve got an armored car heist to solve. There’s millions of dollars at stake.

And Wade is the sort of guy who doesn’t think things through. When he finds money in an odd place, he seizes the opportunity and thinks nothing of what might happen.

Cash paints a scary picture of the dark Pruitt, scarred and damaged by a baseball accident and full of hatred. But at times, Pruitt seems more like a graphic novel bad guy than a real person — perhaps the dehumanizing is intentional.

Wade and the girls travel to Myrtle Beach and then St. Louis for the Mark McGwire/Sammy Sosa home run battle. The baseball game is the perfect setting for the confrontation where anything could happen. When Cash wraps it all up, you’ll see the light rising on “This Dark Road to Mercy.”

Salisbury is lucky to have Cash visit for a book signing on Monday, Feb. 3, one of his first stops on his book tour. He will be at Literary Bookpost from 5:30-8:30 p.m., signing and talking about his book. Cash is an up-and-coming author whose career is worth following.

Land a role in Piedmont Players’ production of ‘Chicago’