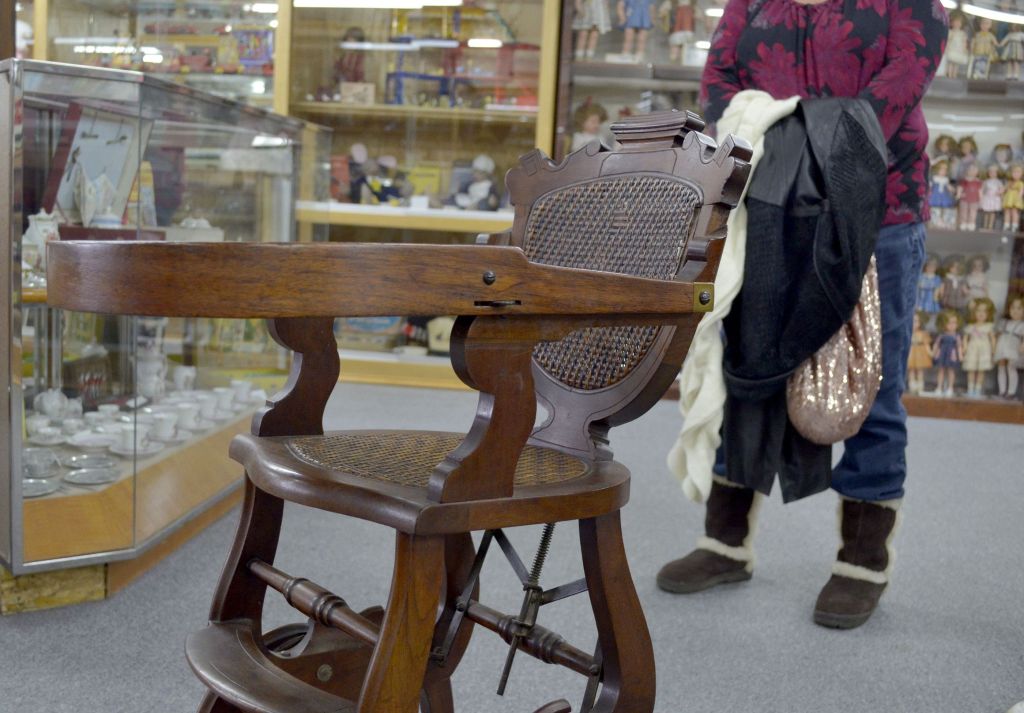 SPENCER — It was like a miniature version of television’s “Antiques Roadshow.”
People sat around or stood in the Spencer Doll and Toy Museum on 4th Street, listening and watching as appraiser Michael Hansen examined the items they’d brought.
Hansen and his wife, Gayle, are collectors themselves, and longtime supporters of the museum.
Friday and Saturday saw well over 60 people bringing items to be appraised — everything from toys and dolls to furniture, jewelry and framed artwork.
At the appraisal table, Michael Hansen examined each item and heard its story.
Ranged along the table near him were guidebooks for identifying certain rare items, such as pottery and dolls.
There were some treasures among them, including a 1920s-vintage doll, still in its original packaging, which Hansen said could be worth as much as $1,200 to a doll collector.
Marcus “Jack” Brown brought in a teddy bear that had been owned by his father.
Patched and well-loved, Brown said his father, the late Wilford Orman Brown, may have had the bear as early as 1912.
Old sepia photos of his father show the bear, and Brown showed those to Hansen.
Similar early teddy bears in pristine condition are worth hundreds of dollars, Hansen said.
Brown said he knew the bear had history behind it. Based on what Hansen told him, he said he might sell it.
“You kind of downsize as you get older,” Brown said.
Nearby, Cheryl Mazza of Salisbury waited in line with several pieces of art and a carefully packed clay statue from China of a man on horseback.
“I found it at a yard sale in Albemarle,” Mazza said. She thought she recognized it as possibly coming from an early dynasty.
Mazza, an art teacher, said she frequently shops bazaars and sales for bargains.
“Everything I brought, I didn’t spend more than a dollar on,” Mazza said.
But this was her first time getting any of those possible treasures appraised, she said.
For Hansen, there were too many interesting items to name.
Over the course of Friday and Saturday, museum staff said well over 100 items had been brought in.
Earlier in the day, Hansen said, one of the biggest finds of this event had come in: “some Mann pottery from 900 to 1100 A.D., which was purchased at a yard sale,” he said.
It was a musical instrument made of pottery — “a little hard to authenticate, but fairly certain it was the real thing,” Hansen said.
On Friday, a person brought in a baseball uniform worn in-game by Eddie Matthews, who played for the Braves in the 1950s and hit 512 home runs in his career.
“Everyone has been wonderful, looking around and caring about the things they had and saw when they were younger,” Hansen said.
He also said the appraisal event — for which guests paid $5 per item to be appraised — showed the community’s support for the downtown museum.
Not everyone found out they had treasures.
Among other things, Hansen examined a samovar table brought in by Delores McAllister, originally of Peoria, Ill., and now living in Salisbury.
The wood-framed, brass-topped table was used to serve treats and sweets at Easter and other special occasions, McAllister said.
In this case, the news wasn’t what she and her daughters, Barbara Roberson and Teresa McAllister, had hoped to hear.
Hansen explained that samovar tables like these are made and exported from overseas, and aren’t really valuable.
Smiling politely, Delores McAllister told the Post, “I can’t believe that, because we’ve had it since I was a little girl, and I’m 85.”
Mazza, meanwhile, learned that at least one of her paintings was probably made by a street artist.
At the same time, he confirmed that the horse statue was Chinese — a reproduction of larger terra cotta statues found in a royal tomb.
Although the horse isn’t worth much money, Mazza said she still plans to keep it and show it to art students.
Aside from the dollar value of the items on display, Hansen said, the real value lies in the stories people tell and their love for the things they value.
“Nothing I say (in appraising) has any value if you love it,” Hansen said to several of those whose items he examined.
This is the third such event, Gayle Hansen said, and future appraisal fairs are planned on a quarterly basis at the Doll and Toy Museum.
Contact Hugh Fisher via the editor’s desk at 704-797-4244.