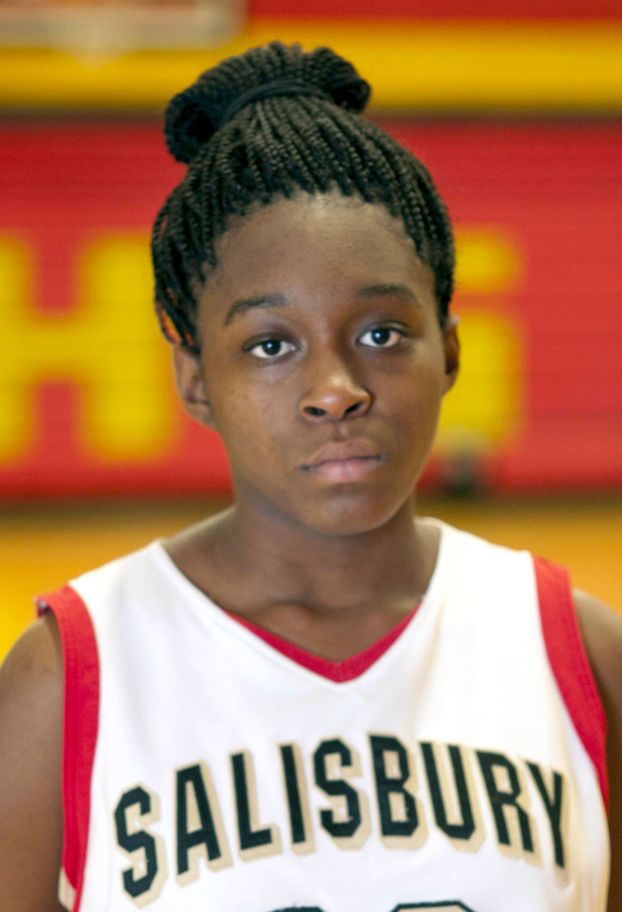 SALISBURY — Salisbury’s girls threw a welcome back party for forward Bryanna Caldwell Friday and she responded with an emphatic triple- double.
Caldwell’s effort plus a ball-hawking defense was far too much for visiting West Davidson as Salisbury claimed their first league win, 69-22.
The 5-10 junior returned to the Hornet team for the first time this season after missing the first semester due to eligibility issues. But she hit the ground running with the trifecta: 18 points, 12 rebounds and 10 steals to lead the assault.
“It really felt good since it was my first game back”, Caldwell stated. “And I am so glad to be back.”
Hornet Coach Lakai Brice was glad to see her back on the court as well but was even more pleased with her entire team’s intensity, especially on defense.
“I have been stressing to them that if we play great defense the offense will come,” Brice said. “We got some easy baskets in transition and overall did a great job. It was a very good effort.”
The great defense came in the form of 26 steals by Salisbury off their full court press and inside help defense. Caldwell had 10 of those steals and Tyzarea Alexander swiped eight. Most all of the steals led to easy transition buckets.
Both teams came in winless in the Central Carolina Conference and enduring long losing streaks. The Hornets ended a six game skid and improved to 6-12, 1-3. The young West Davidson squad has now lost 13 in a row and stand at 1-15, 0-4.
The Green Dragons actually jumped out to a 4-2 lead early on with buckets by Casey Crisp and Valerie Martin. But the Hornet thievery cranked up and quickly built the lead to 21-4 before West scored again. They went a full seven minutes without a point over the first two quarters and trailed 34-10 at the half.
“Salisbury came out very aggressive, ready to play and we didn’t” West Davidson coach Jamie Motsinger stated. “It was almost like we were intimidated by their aggressiveness and never recovered.”
West did nail a trio of threes in the second half but Salisbury kept the pressure on and appropriately closed it out with an Alexander steal and lay-up as the game ended for the 47 point margin..
Alexander matched Caldwell in the scoring column with 18 while center Nyasia had 13 including a surprise bank-shot three in the final period. Sierra Charles scored 7 while Breya Philpot contributed on the boards with 10 rebounds.
Martin led the Green Dragons with 7 followed by Crisp with 5, all in the first half.
WEST DAVIDSON (22) — Martin 7, Crisp 5, R. Mast 4, Leonard 3, O. Mast 3, Dalton, Hunt, Yancey.
SALISBURY (69) — Caldwell 18, Alexander 18, Harris 13, Charles 7, Wolfe 5, Philpot 4, Hightower 4, Angle.
W. Davidson 4 6 8 4 — 22
Salisbury 16 18 14 21 — 69