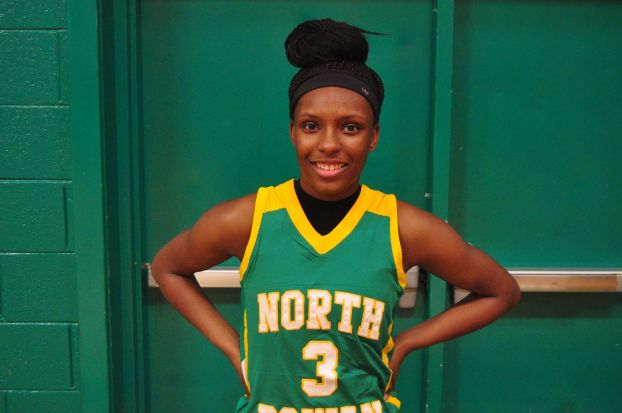 THOMASVILLE — There was no need to play Brian Lytton’s words backwards to decipher some hidden message Friday night.
The second-year North Rowan coach easily pinpointed the reason for the Cavs’ impressive 58-53 CCC win at Thomasville.
“Without doubt, our defense won this game for us,” Lytton said after North survived a tense race to the finish line. “Our shooting wasn’t that great, but we got some turnovers at critical times. That was the difference.”
North (11-3, 3-1) forced 35 turnovers, erased a 23-11 second-quarter deficit and anchored itself in second place behind East Davidson.
“We love a challenge,” senior Nycieko Dixon smiled afterward. “We’re a nitty-gritty team. We play hardest when it gets down to the nitty-gritty.”
This outcome wasn’t cemented until the waning moments. There were four lead changes in the fourth quarter and North found itself trailing 48-46 after Thomasville’s Jashana Thomas hit a 15-foot set shot from the right side with 3:20 remaining.
“We gave ourselves a chance,” losing coach Brandon Staton said after the Bulldogs (11-3, 2-2) had a three-game winning streak curbed. “But how can you win wth 30-something turnovers? I thought it was more like 60.”
North drew within a point when Aliya Farmer converted the second of two free throws and went ahead for keeps when Dixon stole a ball and skated in for a layup with 2:19 to go.
“What I remember,” Dixon said after scoring all 21 of her points in the second half, “is Coach Lytton bringing us to the bench and telling us not to let them get the ball in the middle of the court. They were trying to get a pass into the middle but it was a loose ball — and 50-50 balls are always ours.”
It was only seconds later that Dixon made another steal and fed a pass to teammate Demeria Robinson, who was fouled and calmly sank two ensuing free throws with 2:08 to play.
Perhaps the clincher came when Farmer galloped downcourt and scored on a jailbreak layup, providing a 53-48 lead with 1:40 on the clock.
It completed a pulsating comeback after poor-shooting start. Dixon essentially shot her way out of a first-half funk. “Just had to stay confident,” she said.
Lytton praised the defensive work of super-sub Tre Allen, a 5-foot-3 sophomore who kept showing up at both ends of the floor.
“I knew this was an important game,” she said. “So I went hard with all the intensity I had. It was just a matter of hanging in there and keeping everything under control.”
•

NOTES: North shot 11-for-18 from the foul line in the fourth quarter. … The Cavs have split six games since senior post Brielle Blaire suffered a season-ending injury on Jan. 3. More importantly, they’ve won two of three CCC matches without her.