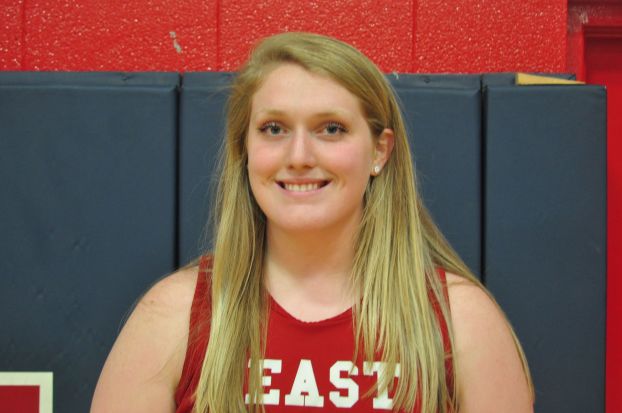 CONCORD — East Rowan’s girls have put an ugly three-game slide in the rearview mirror, and now they’re back in the driver’s seat to win the SPC championship.
Kelli Fisher did most of the steering with 21 points and 11 rebounds in Friday’s 62-30 romp at Concord.
“We’ve got our mojo back,” Fisher said. “And it’s so much fun to be winning again.”
The first-place Mustangs (14-3, 10-1) are now two games up on Hickory Ridge, Central Cabarrus and South Rowan.
It’s worth talking about because East hasn’t earned any girls hoops hardware since it won the NPC regular-season with a Maggie Rich-led crew in 2004.
East was bad early, shooting layups the first five minutes like it was tossing hand grenades — like getting close was sufficient.
“We had a frustrating start,” Wike said. “But then we started working together better. We passed the ball well and moved the ball.”
East’s lead was only 11-9 after a quarter, but then Fisher really got on a roll.
“Kelly was fluid tonight, and she had soft hands,” East coach Danielle Porter said. “She did great things.”
Fisher scored three straight buckets to trigger a 15-0 run. Shenique Pharr scored twice, Jocelyn Lowe drove for a basket, Fisher got two more, and then Shenell Pharr scored.
East went from struggling at 13-11 to cruising at 28-11 in a hurry.
When Lauren Thomas hit a 3-pointer to close the half, the Mustangs led comfortably 31-13.
Then East played its best basketball in the third quarter. Fisher and Karleigh Wike just overpowered the small Spiders inside, and East’s lead swelled to 51-19 after three quarters.
“The third quarter has been good to us lately,” Porter said. “We came out strong. We did a good job boxing out and a good job defensively.”
Jada Black scored 11 for the injury-depleted Spiders (2-14, 1-9)
Fisher had 11 rebounds. Wike finished with 12 points, 14 rebounds, three blocks and a team-high four steals. Amani Ajayi had four deflections. Backup post Shelby Benge contributed six points in the second half.
East was a dismal 2-for-16 on 3s and shot 37 percent, but 26 offensive rebounds compensated for a lot of misses.
“I think we’ve gotten back to playing together and playing well,” Porter said. “Sometimes failure is necessary to get everyone refocused.”