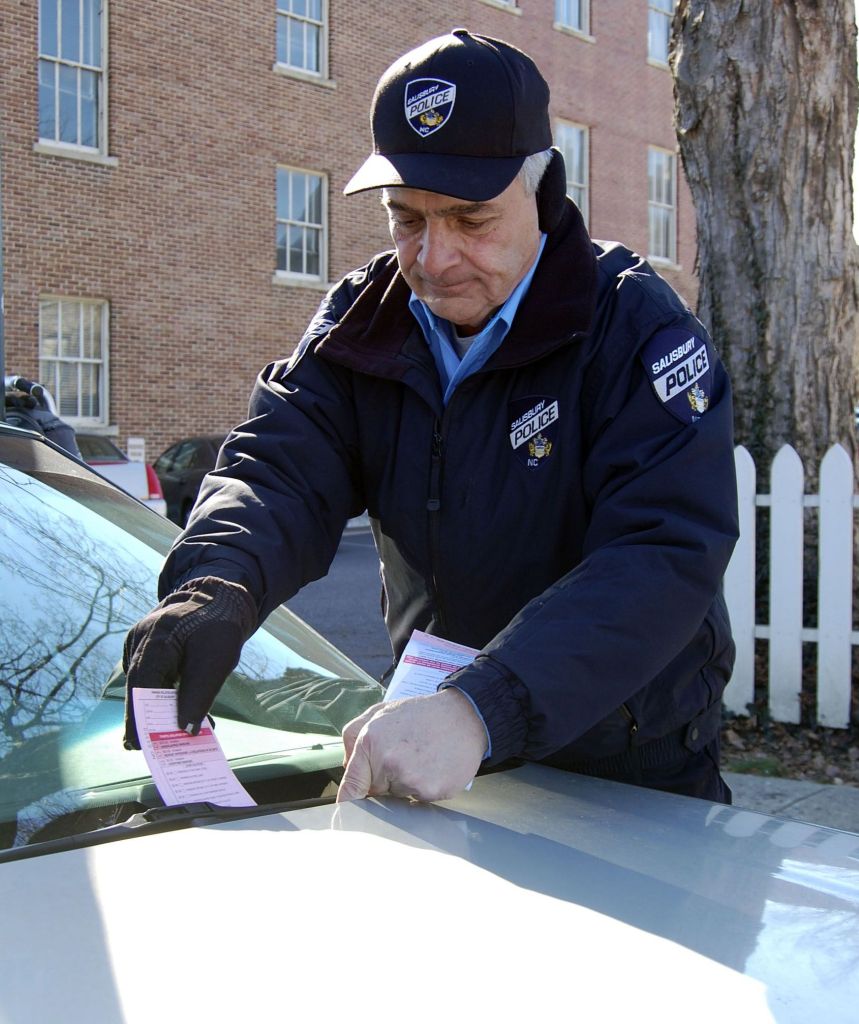 SALISBURY — Some downtown motorists may have been surprised this week to find out the hard way that Salisbury’s new parking ticket “cop” does not take a day off, even when temperatures plummet.
Mike Sellitto was on the job Friday morning in bitter cold, making his rounds and ticketing cars that had overstayed the two-hour limit. Properly titled the parking control specialist, Sellitto said he has many people call him a cop even though he’s not a sworn police officer.
The temperature dropped to 7 degrees in Rowan County Thursday night, close to the record low of 4 degrees that was set in 1963. Sellitto, who spends about 75 percent of his working hours outside, said that the cold does not bother him, as long as he takes precautions.
“For me personally, I grew up up North, so I guess I may be more used to the cold than some,” Sellitto said in an authentic accent.
The key to surviving cold weather, according to this New York City native, is to dress properly.
Sellitto starts with thermal long underwear, top and bottom. He’s partial to the old-fashioned waffle-type material and said the new high-tech fabrics do not offer the same warmth.
He then dons his uniform, jacket, earmuffs, hat and heavy gloves. A lefty, Sellitto keeps a hand warmer in his left pocket to warm his ticket-writing hand when he has to remove his glove.
The other trick to working successfully outside in near record-breaking cold is knowing when and where to get out of the elements, Sellitto said.
“If I need to warm up, I stop somewhere and go inside,” he said. “The merchants are wonderful and accommodating.”
Downtown business owners like to see Sellitto making his rounds so people will not park for hours on end in the two-hour spaces meant for customers.
Zipping around Friday on his Segway, Sellitto said he logs between eight to 10 miles a day and writes on average 25 tickets. He suspected he would write fewer on Friday because there were not many cars downtown. “I think a lot of people stayed home today because of the cold,” he said. “It’s pretty slow around here.”
Sellitto worked 20 years for Food Lion, which brought him to Salisbury three years ago. He retired in 2012 but after a year, found himself bored and lonely.
“I didn’t realize how much I would miss interacting with people,” he said.
So he joined the Salisbury Police Department in September as the parking enforcer and said he enjoys everything about the job, although he is not a fan of extreme temperatures at either end of the thermometer.
“It’s no fun when it’s 95 and 100 percent humidity,” Sellitto said.
Maybe not, but that hot weather scenario might sound pretty appealing to many people right about now, with temperatures predicted to dip to 15 degrees again tonight.
Contact reporter Emily Ford at 704-797-4264.